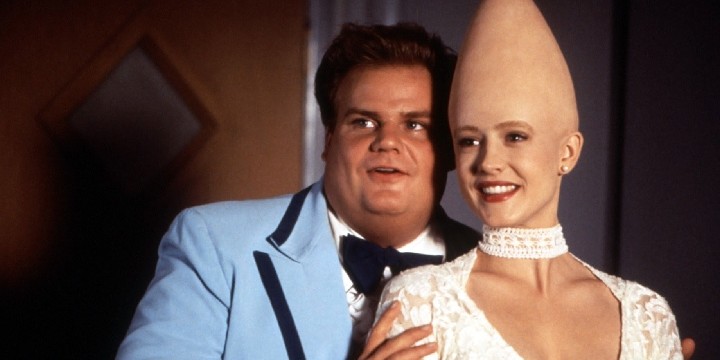 Read these top 25 Coneheads quotes and strap yourself in for a wild and hilarious ride!

Do you believe aliens exist? Well, there have certainly been a lot of discussions on this topic. And, while it’s bizarre to think that there are other creatures on different planets of the universe, we can’t help but be excited about that fact.

This would be one of the things that make Coneheads such a classic. It’s a movie that follows Beldar’s family’s journey as they get stranded on Earth and are forced to live as typical human beings.

That’s already funny in itself. However, what made it more hilarious is that they are cone-headed aliens. This trait makes them stand out from the crowd, but they try to play it all down.

If we’ve piqued your interest, check the complete list below. We have the best and funniest quotes from Beldar, Prymaat, Connie, and more!

Let’s check the most iconic Coneheads quotes below.

And make sure to read these The Princess Diaries quotes and Easy A quotes.

1. “Your positive perception of me is vital to my existence. Besides, it is not every day a father can give the world to his child.” – Beldar Conehead

2. “If, for some reason, your life functions ceased, my most precious one, I would collapse, I would draw the shades, and I would live in the dark. I would never get out of my slar pad or clean myself. My fluids would coagulate, my cone would shrivel, and I would die, miserable and lonely. The stench would be great.” – Beldar Conehead

4. “This dwelling is no longer acceptable. Even by Earth standards, it is not good enough for you and our young one. We must try to settle in a safer neighborhood. One with better schools and a stronger local economic matrix which will not tax us to death.” – Beldar Conehead

5. Connie Conehead: “I think I’ll have some Tang.”

Beldar Conehead: “Astronauts to the moon?”

6. Otto: “Are you telling me you don’t have a social security number?”

Beldar Conehead: “I am an illegal alien.”

7. “I was a young cone myself once. Before I met Beldar, I was very attracted to a young Thorasian forger. And as far as I was concerned, there was no other life force in the universe that mattered. But then he got a job working at a volcano complex on some moon in the Petulaus Cluster. I never saw him again. And it broke my blood valve chamber.” – Prymaat Conehead

8. Beldar Conehead: “Do not despair. We will be rescued. Until then, we must adapt. When the hydrogen droplets have ceased, we will go forth and live undetected on Earth amongst the blunt skulls.”

Prymaat Conehead: “Beldar, how can we live among the blunt skulls?”

Beldar Conehead: “We will blend in.”

10. “You know, Connie, I read in a magazine that you can talk to me about anything.” – Prymaat Conehead

11. “Unacceptable! Your cone is too young! Get up! You are coming to Remulak right now!” – Beldar Conehead

Larry Farber: “Ah forget him; he’s not a member.”

Beldar Conehead: “I find you unacceptable!”

Beldar Conehead: “If I did not fear the incarceration of human authority figures I bring pressure to your blunt skull and cause it to collapse!”

Beldar Conehead: “A personal conveyance named after its inventor, an assassinated ruler, a character from Greco-Roman myth, and a small furry mammal.”

15. INS Deputy Commissioner Gorman Sneedling: “Do you agree that the world is headed for a terrible calamity?”

Beldar Conehead: “Most definitely. In fact, I have direct, personal knowledge that this is so.”

INS Agent Eli Turnbull: “Great, may we come in?”

Coneheads Quotes to Get a Glimpse of Another World

16. Beldar Conehead: “If everyone jumped into a bituminous cauldron, would you jump in too?”

Connie Conehead: “I am not a little cone anymore, Dad!”

Beldar Conehead: “Do not involve the approval of your other parental unit. Now, if you wish to accompany me to the enclosed retail compound, you will go to the hygenic chamber upstairs immediately, and remove the decal!”

17. Beldar Conehead: “When my people come to colonize this planet, your name will be on the protected rolls, and you will come to no harm.”

Gladys Johnson: “You are wise. But there’s a sadness to your wisdom.”

19. “Take my car; its re-enforced alloy superstructure is far superior to that of your broken down, rusted out shit box.” – Beldar Conehead

Coneheads Quotes for Those Curious About Aliens

Beldar Conehead: “Ah, pizza! I will enjoy it.”

22. Prymaat Conehead: “When the Highmaster hears of the destruction of our ship, he will be most displeased.”

Beldar Conehead: “Affirmative. He will surely cut off my plargh and hand it to me.”

Prymaat Conehead: “Incorrect. You have been working nights. I have been saving.”

24. Otto: “Beldar, do you know the key to success in this country?”

Beldar Conehead: “I do not.”

Otto: “Well, I’m gonna tell you. Look good. Be your own boss. Never get chained to a desk. When it comes to business, take cash only.”

Beldar Conehead: “Look good, be own boss, no desk, cash only.”

25. Marlax Zanthstrom: “Greetings, Beldar. We haven’t heard from you in clarsogs. And I’m glad to see your life functions are still active.”

Marlax Zanthstrom: “I trust you have enslaved the planet and are awaiting further instructions.”

Beldar Conehead: “Unanticipated failure of mentaglion drive has caused us to abandon our vessel in a fluid mass. At what time coordinates might we expect a rescue vessel?”

Marlax Zanthstrom: “Rescue vessel? You tarpaath! I would not like to be in your cone when the Highmaster hears of your failure. He will not take it lightly. I will try to arrange for a star cruiser to enter your solar system in about—oh, seven zerls.”

What Would You Feel if You Suddenly Come Face to Face With an Alien?

This classic comedy all started as part of a series of Saturday Night Live sketches. Producers hoped it would be a blockbuster hit like The Blues Brothers. Unfortunately, it was less successful than they had hoped.

Nonetheless, Coneheads remains a classic that people of different generations keep returning to. Who wouldn’t, when you’re given a whole new point of view as someone who may or may not be able to encounter aliens in real life?

So, while it may be a flop initially, there’s no denying how much of an influence Coneheads provides. It’s light, hilariously mind-boggling, and will make your day much brighter! Keep this list in your bookmarks for when you need another dose of the movie’s comedy!