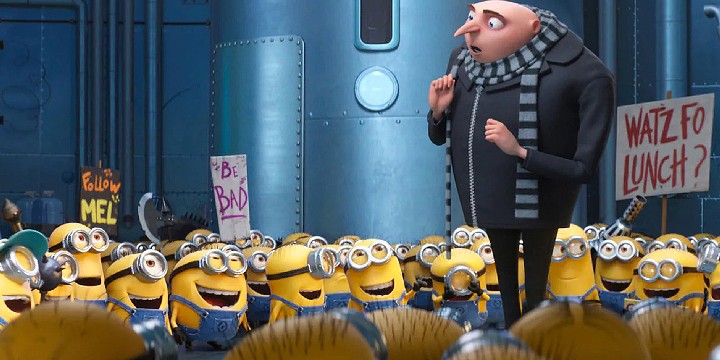 These Despicable Me quotes will entertain you and give you pieces of wisdom you can apply to your life!

There will be people who will come into our lives who will drastically change everything. This is precisely what happens in Despicable Me when Gru meets the three orphaned girls.

Gru is slightly different from the other villains in the world. He is not evil by nature, but he is just too obsessed with being the best, and his lack of respect for others makes him a bad guy. Gru also believes that family hinders his progress as a villain, so he decides to make his own family—the minions.

By a twist of fate, he met the three girls, Margo, Edith, and Agnes, who would teach him the meaning of life and love. They changed his life positively by helping him become more like a hero instead!

Read on and reminisce about your favorite scenes from this iconic movie!

And don’t forget to check out these The Incredibles quotes and Coraline quotes.

Gru: “I know, I know, and it is the worst mistake I ever made. But you have to jump now.”

7. “It’s like my heart is a tooth, and it’s got a cavity that can only be filled with children.” – Gru

10. “The recital? I am the greatest criminal mind of the century! I don’t go to little girls’ dance recitals.” – Gru

Iconic Despicable Me Quotes to Keep In Your Heart Forever

Gru: “The physical appearance of the please makes no difference. It is still no, so go to sleep.”

16. Gru: “Hello, Fred. FYI. Your dog has been leaving little bombs in my yard, and I do not appreciate it.”

Fred McDade: “Oh, you know dogs. They go where they want to go.”

Gru: “Unless they’re dead. I’m joking! Although it is true. Anyway, have a good one.”

Despicable Me Quotes for a Day Full of Laughs

Gru: “Yes, but they are very old and highly unlikely to blow up. But try not to toss and turn.”

Mr. Perkins: “You don’t have it? And yet you have the audacity to ask the bank for money?”

20. Dr. Nefario: “We’ve been working on this for a while now. It’s an anti-gravity serum. I meant to close that. He’ll be alright, I’m sure.”

Gru: “Do the effects wear off?”

21. Gru: “Clearly, we need to set some rules. Rule number one, you will not touch anything.”

Margo: “Aha. What about the floor?”

Margo: “What about the air?”

Edith: “What about this?”

Gru: “Where did you get that?”

Gru: “Okay, rule number two, you will not bother me while I’m working. Rule number three, you will not cry, or whine, or laugh, or giggle, or sneeze or barf, or fart! So no, no, no annoying sounds. All right?”

Agnes: “Does this count as annoying?”

Despicable Me Quotes for Those Who Adore the Minions

23. Gru: “This is very important; you have to get the little girl a new unicorn toy.”

Gru: “The small one, from Las Vegas!”

Gru: “And I won’t even mention the Eiffel Tower—also Vegas.”

Dave the Minion: “What?”

What Valuable Lesson Did You Learn From These Despicable Me Quotes?

Sometimes, people tell us that our dreams are unattainable, which leads us to question our own goals in life. Luckily, Gru had three girls willing to support him and his dreams.

The realities of the world might be challenging to face, but at times, the only thing we all need is someone to help and guide us on the steps we want to take. If you already have that someone, then make sure to treat them right.

After all, only a few people will stay with you and believe in you until the end. So, like how Gru protects Margo, Edith, and Agnes, learn to protect people who are willing to support you, too. They can be your strength to make your dreams come true.

To end this, we hope that this list of Despicable Me quotes was able to give you new perspectives on life. Remember, always strive for the better by making the most of what you have!