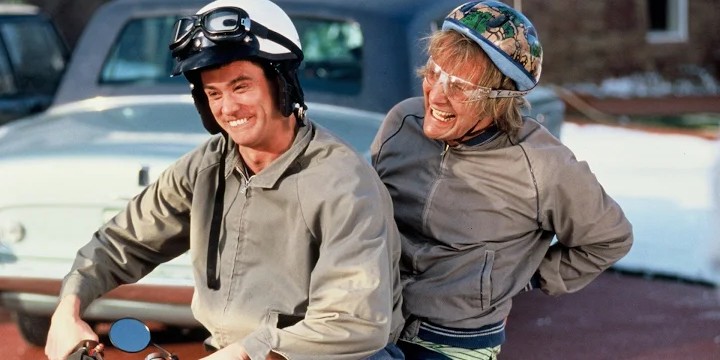 Laughter is the best medicine, and that’s why we’ve compiled a list of the top 60 Dumb and Dumber quotes to make you feel jolly and bright!

Dumb and Dumber is a 1994 box office comedy film directed by Peter Farrelly. The main actors are the well-known Jim Carrey and Jeff Daniels.

Despite widespread criticism, this film’s success has endured.

Give yourself the happiness you deserve. To get away from your sadness, read the funny, funnier, and funniest quotes ever. Enjoy!

And don’t forget to check out these Ace Ventura quotes and Interstellar quotes.

1. “Why you going to the airport? Flying somewhere?” – Lloyd Christmas

2. “We got no food, we got no jobs, our pets’ heads are falling off!” – Lloyd Christmas

7. “So you’re telling me there’s a chance!” – Lloyd Christmas

8. “I just figured she was a raging alcoholic.” – Lloyd Christmas

12. “She gave me a bunch of crap about me not listening to her, or something. I don’t know, I wasn’t really paying attention.” – Harry Dunne

14. “Just when I think you couldn’t possibly be any dumber, you go and do something like this and totally redeem yourself.” – Harry Dunne

15. “I desperately want to make love to a schoolboy.” – Lloyd Christmas

Hilarious Dumb and Dumber Quotes That Will Tickle You With Happiness

16. “One time we mated a bulldog with a Shih-Tzu. We called it bullshit.” – Harry Dunne

18. “I expected the Rocky Mountains to be a little rockier than this.” – Harry Dunne

20. “You know what really chaps my ass though? I spent my life savings turning my van into a dog. The alarm alone cost me two hundred.” – Harry Dunne

22. “You had an extra pair of gloves this entire time?!” – Harry Dunne

24. “Thanks. Hey, I guess they’re right. Senior citizens, although slow and dangerous behind the wheel, can still serve a purpose. I’ll be right back. Don’t you go dying on me!” – Lloyd Christmas

26. “Yesterday was one of the greatest days of my life. Mary and I went skiing, we made a snowman, and she touched my leg.” – Harry Dunne

29. “Oh yeah. They always freak out when you leave the scene of an accident, you know?” – Lloyd Christmas

Dumb and Dumber Quotes That Will Slap You With Reality

34. “Some people just aren’t cut out for life on the road.” – Lloyd Christmas

35. “You gotta take life by the balls! Chew it up and spit it out! Dance to the tune of a different drummer! Spread your wings and fly and run and jump! God, help me!” – Lloyd Christmas

36. “We are supposed to talk about all expenditures Lloyd! We are on a very tight budget.” – Harry Dunne

37. “Well, it’s not gonna do us any good sitting here whining about it. We’re in a hole. We’re just going to have to dig ourselves out.” – Lloyd Christmas

Dumb and Dumber Quotes to Get You off Your Seat

39. “Hey, you wanna hear the most annoying sound in the world? Eeeeeeeeeeehhhhhhh!” – Lloyd Christmas

44. “My friend Harry and I are saving up to open our own pet store.” – Lloyd Christmas

46. “Yeah, well you aware it’s against the law to have an open alcohol container here in the state of Pennsylvania? Come on.” – State Trooper

47. “If I know her as well as I think I do, she’ll invite us right in for tea and strumpets!” – Lloyd Christmas

49. “Man, you are one pathetic loser. No offense.” – Lloyd Christmas

51. “Some place warm. A place where the beer flows like wine. Where beautiful women instinctively flock like the salmon of Capistrano. I’m talkin’ bout a little place called, As-pen.” – Lloyd Christmas

53. “Pull your vehicle to the side of the road! License and registration, please. You fellas were going a little fast back there, wouldn’t you say? You fellas been doing a bit of boozing, have ya? Suckin back on grandpa’s old cough medicine?” – State Trooper

54. “Would you like an atomic pepper, Mr. Mentalino?” – Harry Dunne

55. “That’s what we’re gonna call it. ‘I Got Worms!’ We’re gonna specialize in selling worm farms. You know, like ant farms.” – Lloyd Christmas

56. “I’d like to eat her liver with some fava beans and a nice bottle of Chianti.” – Lloyd Christmas

57. “The first time I set eyes on Mary Swanson, I just got that old fashioned romantic feeling where I’d do anything to bone her.” – Lloyd Christmas

58. “Man, I would have to be a real lowlife to go rooting around in someone else’s private property.” – Lloyd Christmas

59. “Hey, look, the Monkees. They were a huge influence on the Beatles.” – Lloyd Christmas

60. “You said it, pal. Maybe we’re not as good of friends as we thought. I mean, if one beautiful girl can rip us apart, then maybe our friendship isn’t worth a damn. Maybe we should call it quits right now.” – Lloyd Christmas

What Is The Stupidest Thing You’ve Ever Done With Your Friends?

Don’t take life too seriously; sometimes, all we need is a little craziness with our friends and loved ones. Happiness has the potential to extend our lives and lower our risk of developing health problems. It’s the key to a more successful and bountiful life.

Dumb and Dumber is an American comedy film about two best friends who found a briefcase at the airport. They plan to travel around the United States to find the owner and return the briefcase. But, the money they were about to return became associated with a kidnapping.

Their lack of common sense and jolliness leads them to the most clever solutions to difficult situations. Here, you’ll realize that sometimes, simple solutions are best.

Did you enjoy reading our collection? Which quotes are your favorites? We would be happy to see your answer in the comments below!