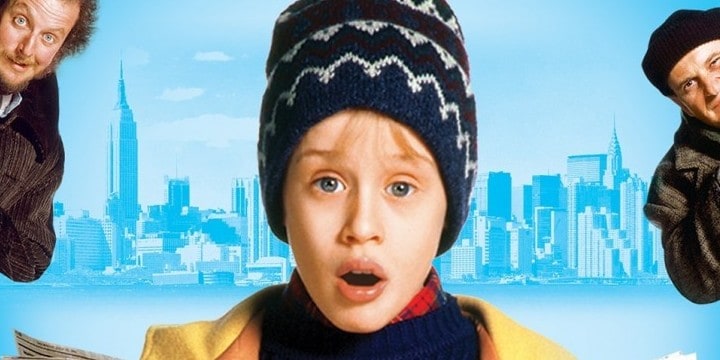 Though you probably know all the scenes and lines from the movie by heart, we’re still giving you the top 100 Home Alone quotes that will take you back to the warm comforts of your home and family.

As one of the greatest Christmas classics, it even became a Guinness World Record holder for more than 25 years.

But aside from all the holiday feels this movie gives, it’s also about a lot of other things like independence, resourcefulness, and family.

And make sure to read these Hocus Pocus quotes and Big Lebowski quotes.

1. “The man I loved fell out of love with me. That broke my heart. When the chance to be loved came along again, I ran away from it. I stopped trusting people.” – Bird Lady

2. “Well, two turtle doves. I’ll tell you what you do—you keep one, and you give the other one to a very special person. You see, turtle doves are a symbol of friendship and love. And as long as each of you has your turtle dove, you’ll be friends forever.” – Mr. E.F. Duncan

5. “No offense, but that seems like sort of a dumb thing to do.” – Kevin McCallister

6. “You should take a chance. Got nothing to lose.” – Kevin McCallister

7. “You see that tree there? Well, to show our appreciation for your generosity, I’m gonna let you select an object from that tree that you can take home with you.” – Mr. E.F. Duncan

9. “If Kevin hadn’t screwed up in the first place again, then we wouldn’t be in this most perfect and huge hotel room with a truck load of all this free stuff.” – Buzz McCallister

10. “This is ridiculous. Only a wimp would be hiding under a bed. And I can’t be a wimp. I’m the man of the house.” – Kevin McCallister

11. “I took a shower, washing every body part with actual soap — including all my major crevices, including in between my toes and in my belly button, which I never did before but sort of enjoyed.” – Kevin McCallister

15. “There are 15 people in this house and you’re the only one who has to make trouble.” – Kate McCallister

17. “Buzz, I’m reading through all your private stuff, you better come out and pound me!” – Kevin McCallister

20. “I was afraid of getting my heart broken again.” – Bird Lady

21. “Your heart might still be broken, but it isn’t gone. If it was gone, you wouldn’t be so nice.” – Kevin McCallister

22. “Okay enough of this gooey show of emotion. All right, everyone, let’s dig in!” – Buzz McCallister

23. “A person’s heart and feelings are very different from skates.” – Bird Lady

24. “If you won’t use your heart, who cares if it gets broken? If you just keep it to yourself, maybe it’ll be like my rollerblades.” – Kevin McCallister

26. “Get down on your knees and tell me you love me!” – Gangster Johnny

28. “So give it a shot for your granddaughter, anyway. I’m sure she misses you and the presents.” – Kevin McCallister

29. “I won’t forget to remember you.” – Kevin McCallister

30. “Sometimes you can trust a person, and then, when things are down, they forget about you.” – Bird Lady

32. “If you need somebody to trust, it can be me.” – Kevin McCallister

33. “I know I won’t see her tonight, but promise me I can see her again. Some time. Any time. Even if it’s just once and only for a couple minutes. I just need to tell her I’m sorry.” – Kevin McCallister

35. “I have been working very hard at keeping people away.” – Bird Lady

36. “What kind of idiots do you have working here?” – Kate McCallister

37. “I can’t trust anybody in this family. And you know what? If I had my own money, I’d go on my own vacation. Alone. Without any of you guys. And I’d have the most fun in my whole life.” – Kevin McCallister

38. “I’ll be fine. The way I’m feeling right now, no mugger or murderer would dare mess with me.” – Kate McCallister

39. “It’s a good thing I have my own ticket just in case you guys try to ditch me.” – Kevin McCallister

40. “Maybe they’re just too busy. Maybe they don’t forget about you, but they forget to remember you. People don’t mean to forget.” – Kevin McCallister

41. “That’s okay. You’re good at it. You’re not boring. You don’t mumble or spit. You should do it more often. Just wear an outfit with no pigeon poop on it.” – Kevin McCallister

42. “I don’t care how much people bug me, I’d rather be with someone than alone.” – Kevin McCallister

44. “I’d like to apologize to my family for whatever displeasure I may have caused you.” – Buzz McCallister

45. “This house is so full of people it makes me sick. When I grow up and get married, I’ll be living alone. Did you hear me?” – Kevin McCallister

46. “Why don’t you just sit up here for a while and think things over? When you’re ready to apologize to Buzz and to the rest of the family, you can come down.” – Kate McCallister

48. “I don’t care if I have to get out on your runway and hitchhike! If it costs me everything I own, if I have to sell my soul to the devil himself, I am going to get home to my son.” – Kate McCallister

50. “My grandfather says if my head wasn’t screwed on, I’d leave it on the school bus.” – Kevin McCallister

53. “You guys give up? Have you had enough pain?” – Kevin McCallister

55. “I’m over here you big horse’s ass, come and get me before I call the police.” – Kevin McCallister

56. “You better not wreck my trip, you little sour puss. Your dad’s paying good money for it.” – Uncle Frank

57. “I’m not sorry. I did what I did because Buzz humiliated me and since he gets away with everything, I let him have it. And since you’re all so stupidto believe his lies, I don’t care if your idiotic Florida trip gets wrecked or not! Who wants to spend Christmas in a tropical climate, anyway?” – Kevin McCallister

59. “You can’t be too careful when it involves underwear.” – Kevin McCallister

Home Alone Quotes on Lessons You Gain From Experiences

60. “I understand. I had a nice pair of rollerblades. I was afraid to wreck them, so I kept them in a box. Do you know what happened? I outgrew them. I never wore them outside. Only in my room a few times.” – Kevin McCallister

61. “It’s late. I don’t know if I’ll have enough time to do enough good deeds to erase all my bad ones.” – Kevin McCallister

62. “I’d probably be lying dead in a gutter somewhere, but not Kevin. Kevin is so much stronger and braver than I am.” – Kate McCallister

64. “He says that if I walked in there and saw him naked, I’d grow up never feeling like a real man.” – Kevin McCallister

65. “I’m sure he was kidding. Just run in there, get your tie, get out, and don’t look at anything.” – Peter McCallister

70. “Nothing would make me happier than to kill you. Knockin’ off a youngster doesn’t mean a lot to me.” – Harry

71. “No offense, aren’t you too old to be afraid?” – Kevin McCallister

72. “You wanna throw bricks, go ahead and throw another one.” – Harry

74. “Put yourself in your kid’s shoes. Where would you go? What would you do?” – Police

76. “As a matter of fact, this has happened before. It’s become sort of a McCallister family travel tradition.” – Kate McCallister

78. “I am trying to get home to my eight-year-old son. And now that I’m this close, you’re telling me it’s hopeless?” – Kate McCallister

Home Alone Quotes That Will Make You Laugh

80. “Did I burn down the joint? I don’t think so. I was making ornaments out of fishhooks.” – Kevin McCallister

83. “Guys, I’m eating junk and watching rubbish! You better come out and stop me!” – Kevin McCallister

84. “I don’t want to sleep on the hide-a-bed with Fuller. If he has something to drink, he’ll wet the bed.” – Kevin McCallister

85. “Mom, does Santa Claus have to go through customs?” – Brooke McCallister

88. “I wouldn’t let you sleep in my room if you were growing on my ass!” – Buzz McCallister

Home Alone Quotes About the True Meaning of Christmas

90. “It’s Christmas Eve. Good deeds count extra tonight. Think of an important thing you can do for others, and go do it. Just follow the star in your heart.” – Bird Lady

91. “How could you have Christmas without a Christmas tree, Mom?” – Kevin McCallister

92. “I don’t want any presents. Instead, I want to take back every mean thing I ever said to my family. Even if they don’t take back the things they said to me. I don’t care. I love all of them.” – Kevin McCallister

93. “You can mess with a lot of things, but you can’t mess with kids on Christmas.” – Kevin McCallister

94. “I know I don’t deserve a Christmas, even if I did do a good deed.” – Kevin McCallister

95. “This is Christmas! The season of perpetual hope!” – Kate McCallister

96. “Well you got your wish last year, maybe you’ll get it again this year.” – Kate McCallister

97. “Why do we have to go to Florida? There’s no Christmas trees in Florida.” – Kevin McCallister

98. “Merry Christmas, little fella. We know that you’re in there, and that you’re all alone.” – Harry

99. “He should be at home with his family around his Christmas tree.” – Kate McCallister

100. “It’s Christmas Eve and because of you, our son is lost in one of the biggest cities in the world.” – Kate McCallister

What Holds the Most Value in Your Heart?

Christmas—a season filled with joy, laughter, music, and gifts. As time passes by, a lot of people forget about the true essence of this holiday, and instead focus on it’s more materialistic side. We forget that this is a time for love and for family. In the movie, it centers on this plot. While Kevin McCallister first found it exciting to be alone and to explore the world on his own, he soon found out that being alone can only be fun for so long, especially during Christmas time when everything just makes you want to be with your family and loved ones. The movie also teaches us about second chances and forgiveness—that no matter what other people say or do, we should find it in our hearts to forgive. After all, forgiveness is a gift we give to ourselves. By forgiving, we let go of the emotions that make us feel burdened and heavy. This Christmas classic is more than just about the holidays. It carries tips and tricks we can all learn from about life—in any season, time, and place.

Did you grow up watching Home Alone? Which quotes from the collection are your favorites? We’d love to know what you learned from this list, so be sure to comment them down below.