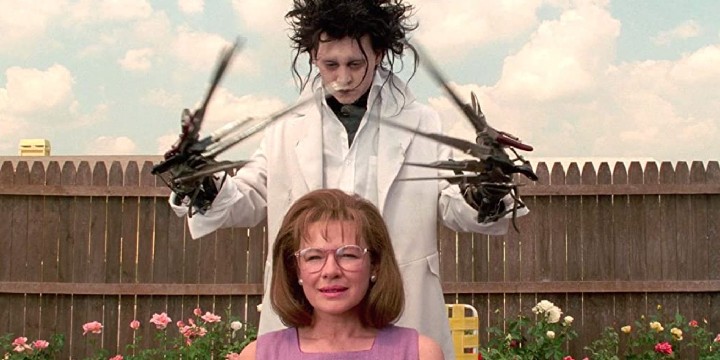 These top 110 Edward Scissorhands quotes will make you understand how difficult it can be to be different.

Tim Burton directed the 1990 American fantasy romance film Edward Scissorhands. The story was based on a plot that Burton wrote together with Caroline Thompson. This move became a cult favorite because of the many different life lessons embedded in the storyline.

We’ve included some of the best lines from both the book and the movie. So, be sure you browse through the list below to learn more about Edward’s extraordinary life!

And don’t forget to check out these Johnny Depp quotes and Corpse Bride quotes.

1. “People are scared of things that are different.” – Edward

2. “But if you had regular hands, you’d be like everyone else.” – Audience Member

5. “Sweetheart, you can’t buy the necessities of life with cookies.” – Bill

6. “Well, a long time ago, an inventor lived in that mansion. He made many things, I suppose. He also created a man. He gave him insides, a heart, a brain, everything. Well, almost everything. You see, the inventor was very old. He died before he got to finish the man he invented, so the man was left by himself—incomplete and all alone.” – Kim

7. “No matter what, Edward will always be special.” – Peg

8. “Don’t be ridiculous. You’re not handicapped, you’re—what do they call the—exceptional?” – Joyce

9. Interviewer: “What’s been the best part of your new life here in town, Edward?”

Edward: “The friends I’ve made.”

11. “I know it is a little early for Christmas, Edward, but I have a present for you.” – The Inventor

12. “That was the single most thrilling experience of my entire life.” – Joyce

15. “You’re here—they didn’t hurt you, did they? Were you scared? I tried to make Jim go back, but you can’t make Jim do anything.” – Kim

Edwards Scissorhands Quotes That Are Full of Passion and Emotion

16. “All along I felt in my gut there was something wrong with him.” – Joyce

17. “Oh. Eddie, is there anything you can’t do? You take my very breath away, I swear. Look at this. Have you ever cut a woman’s hair? Would you cut mine?” – Joyce

19. “Before he came down here, it never snowed. And afterward, it did. I don’t think it would be snowing now if he weren’t still up there. Sometimes, you can still catch me dancing in it.” – Kim

25. “Forget about holding her hand, man. Think about the damage he could do to other places.” – Jim

Kim: “Because I was there.”

28. “Are you alone? Do you live up here all by yourself? What happened to your face? No, I won’t hurt you. But at the very least, let me give you a good astringent. And this will help to prevent infection. What’s your name?” – Peg

Edward: “Because you asked me to.”

Enthralling Quotes From Edward Scissorhands to Immerse You in the Storyline

Kim: “Of course he had a name. His name was Edward.”

32. “It’s not heaven he’s from, it’s straight from the stinking flames of hell. The power of Satan is in him, I can feel it.“ – Esmeralda

34. “I know a doctor who might be able to help you.” – Audience Member

36. “The years spent in isolation not equipped him with the tools necessary to judge right from wrong. He’s had no context. He’s been completely without guidance. Furthermore his work, the garden sculptures, hairstyles, and so forth, indicate that he’s highly imaginative of—character. It seems clear that his awareness of what we call reality is radically underdeveloped.” – Psychologist

37. “Have you sheep strayed so far from the flock?” – Esmeralda

40. “You could’ve gone up there, you still could go.” – Granddaughter

46. “I can’t believe you sheep have strayed so far from the path of righteousness!” – Esmeralda

48. “Because my father keeps the damn room locked. We need Edward to get us in.” – Jim

50. “You can’t touch anything without destroying it! Who the hell do you think you are hanging around here, huh? Get the hell outta here! Go you freak!” – Jim

54. “He has been sent first to tempt you. But it’s not too late. You must push him from you, expel him! Trample down the perversion of nature!?” – Esmeralda

58. “Put your hands high in the air where we can see them! Your hands up!” – Officer Allen

Edward Scissorhands Quotes That Will Tickle Your Curiosity

61. “It must have been awful when they told you whose house it was.” – Kim

62. “You could have a cosmetics counter.” – Edward

63. “And then she showed me the back room where she took all of her clothes off.” – Edward

64. “No, not since last season. Today, I’ve come to show you our exquisite new line in softer colors in shadows, blushes, and lipstick. Everything you need to accent and highlight your changing look.” – Peg

65. “Why is it snowing, Grandma? Where does it come from?” – Granddaughter

68. “He’s got something in his hands. Looks like knives.” – Policeman

Kim: “Out looking for you.”

72. “Shame on you, keeping your unusual guest all to yourself. We think that’s mighty selfish of you.” – Joyce

73. “Okay, a little ethics. You are walking down the street. You find a suitcase full of money. There’s nobody around. No human person is in evidence. What do you do?” – Bill

Quotes and Conversations From Edward Scissorhands

79. “Eddie. The guys and I were talking, we’d like want to invite you to our card game on Friday night. Would you like that? Only thing is, you can’t cut!” – George

84. .”You don’t know about the wonderful world of teenage girls. They’re all crazy. I don’t know what it is. They reach a certain age, they develop these gland things, their bodies swell up, puff! They go crazy.” – Bill

86. “Kevin! Edward—would you like some butter for your bread? Great!” – Peg

87. “Hello? Hello? Hello? Avon calling. Oh, my. Hello? Hello? I’m Peg Boggs. I’m your local Avon representative. Hello? I—I’m sorry to barge in like this, but you don’t have any reason to be afraid. Ooh! This is some huge house, isn’t it? Thank goodness for those aerobics—classes. Hello? Hello?” – Peg

88. “You don’t understand. The only thing that guy hangs onto tighter is his dick.” – Jim

89. “Oh, that was so sweet of you to want to correct the situation. What time does the barbecue begin?” – Joyce

101. “My name’s Joyce, and I noticed that you have not tasted any of the ambrosia salad that I made especially for you. Allow me.” – Joyce

104. “Let us pretend that we are in the drawing room and the hostess is serving tea.” – Bill

108. “Jim, it’s your house. They can’t arrest you for setting off your own alarm. We’ll just tell them we were breaking in.” – Kim

109. “Do you imagine those hands are hot or cold? Just think what a single snip could do.” – Joyce

Would You Love and Accept Someone Different?

Johnny Depp played Edward, an artificial humanoid with scissor blades instead of hands. Edward’s inventor died from a heart attack, leaving him unfinished.

He was discovered by a lady who adopted him into her family and tried to help him. The plot largely centered around Edward, who was attempting to blend in and trying to fall in love.

This film emphasized that being different is okay, as long as you take the time to get to know yourself better and stay positive. Spread your compassion and love to everyone!

We are created wonderfully because each of us has a special gift to offer the world. Everyone deserves to be loved, no matter how different they are or what they believe in.

Did you like our collection? Which quotes are your favorites? Let us know in the comment section below!