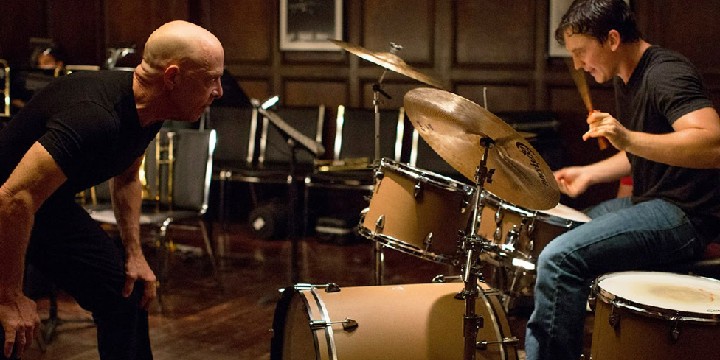 These 25 Whiplash quotes will have you reflect on your journey to your dreams.

In Whiplash, we better understand the relationship between Terence Fletcher and Andrew Neiman. Andrew is a promising and ambitious drummer who comes under Terence’s intense mentorship. He is known to stop at nothing to unleash his mentor’s potential.

Terence’s intentions might be inherently good, but it’s hard for others—especially his young mentees—to understand. His actions put a strain on his relationship with Andrew.

Their relationship, though at times chaotic, shows us what it’s like when we’re newly employed and want to show off our best skills. We often want to boast that we’re the best at what we do. However, like always, there will always be someone better than you; to succeed, you must be determined, passionate, and focused.

Whiplash is a movie that’s deeper than it seems. So, to gain some meaningful words of wisdom, check the list below.

And don’t miss out these Fargo quotes and Crazy, Stupid, Love quotes.

1. “There are no two words in the English language more harmful than ‘good job.’” – Terence Fletcher

2. Terence Fletcher: “You’re here for a reason. You believe that, right?”

3. Andrew Neiman: “But is there a line? You know, maybe you go too far, and you discourage the next Charlie Parker from ever becoming Charlie Parker.”

Terence Fletcher: “No, man, no. Because the next Charlie Parker would never be discouraged.”

4. “Either you’re deliberately out of tune and sabotaging my band, or you don’t know you’re out of tune, and that’s even worse.” – Terence Fletcher

5. “Now, this one really upsets me. We have an out-of-tone player here. Before I continue, would that player care to identify himself? No? Okay, maybe a bug flew in my ear.” – Terence Fletcher

6. “I never really had a Charlie Parker. But I tried. I actually f*cking tried. And that’s more than most people ever do.” – Terence Fletcher

7. Terence Fletcher: “I don’t think people understood what it was I was doing at Shaffer. I wasn’t there to conduct. Any f*cking moron can wave his arms and keep people in tempo. I was there to push people beyond what’s expected of them. I believe that is an absolute necessity. Otherwise, we’re depriving the world of the next Louis Armstrong. The next Charlie Parker. I told you about how Charlie Parker became Charlie Parker, right?”

Andrew Neiman: “Jo Jones threw a cymbal at his head.”

Terence Fletcher: “Exactly. Parker’s a young kid, pretty good on the sax. Gets up to play at a cutting session, and he f*cks it up. And Jones nearly decapitates him for it. And he’s laughed off-stage. Cries himself to sleep that night, but the next morning, what does he do? He practices. And he practices, and he practices with one goal in mind, never to be laughed at again. And a year later, he goes back to Reno, and he steps up on that stage and plays the best motherf*cking solo the world has ever heard. So imagine if Jones had just said, ‘Well, that’s okay, Charlie. That was alright. Good job.’ And then Charlie thinks to himself, ‘Well, sh*t, I did do a pretty good job.’ End of story. No bird. That, to me, is an absolute tragedy. But that’s just what the world wants now. People wonder why jazz is dying.”

8. “Nieman, you earned the part. Alternates, will you clean the blood off my drum set?” – Terence Fletcher

9. “I’d rather die drunk, broke at 34, and have people at a dinner table talk about me than live to be rich and sober at 90, and nobody remembered who I was.” – Andrew Neiman

10. “Everybody remember, Lincoln Center and its ilk use these competitions to decide who they are interested in and who they are not. And I am not gonna have my reputation in that department tarnished by a bunch of f*cking limp-dick, sour-note, flatter-than-their-girlfriends, flexible-tempo dipshits. Got it?” – Terence Fletcher

Andrew Neiman: “I’ll be on your time.”

13. “For the record, Metz wasn’t out of tune. You were, Erickson, but he didn’t know, and that’s bad enough.” – Terence Fletcher

Andrew Neiman: “I think being the greatest musician of the 20th century is anybody’s idea of success.”

Jim Neiman: “Dying broke and drunk and full of heroin at the age of 34 is not exactly my idea of success.”

Terence Fletcher: “Say it so the whole band can hear you.”

Terence Fletcher: “You are a worthless, friendless, faggot-lipped little piece of sh*t whose Mommy left Daddy when she figured out he wasn’t Eugene O’Neill, and who is now weeping and slobbering all over my drum set like a f*cking nine-year-old girl! So for the final, father-f*cking time, say it louder!”

18. “That is not your boyfriend’s dick, so don’t come too early.” – Terence Fletcher

19. “Get the f*ck off my sight before I’ll demolish you!” – Terence Fletcher

20. “The folder is your f*cking responsibility, Tanner. Why would you give it to Neiman? Right? You give a calculator to a f*cking retard he’s gonna try to turn on a TV with it. Now get your sticks and get your ass on stage.” – Terence Fletcher

Terence Fletcher: “A medical condition? What are you, f*cking Sanjay Gupta? Play the goddamn music.”

Terence Fletcher: “Alright. Well, you better f*cking hope your memory doesn’t fail you. And I hope you play it a whole lot better than you did last month in rehearsal because I do not intend to start losing now.”

22. Terence Fletcher: “Try me, you f*cking weasel! At 5:30, that’s in exactly 11 minutes, my band is on stage. If your ass is not on that stool with your own f*cking sticks in hand or you make one f*cking mistake—one! I will drum your ass back to Nassau, where you can turn pages until you graduate or f*cking drop out! By the time you’re done at Schaeffer, your gonna make daddy look like a f*cking success story, got it? Or, we can let Johnny Utah play the part; you choose.”

Nicole: “And I would stop you from doing that?”

Nicole: “You know I would stop you from doing that. You know, for a fact?”

Nicole: “And when I do see you, you’d treat me like sh*t because I’m just some girl who doesn’t know what she wants. And you have a path, and you’re gonna be great, and I’m going to be forgotten, and therefore you won’t be able to give me the time of day because you have bigger things to pursue?”

Nicole: “What the f*ck is wrong with you? You’re right; we should not be dating.”

Terence Fletcher: “When did you become a f*cking expert on what I can or cannot do, you f*cking weepy willow shitsack?”

Andrew Neiman: “I earned that part.”

Ryan Connolly: “Hey, why don’t you just back off, bro?”

Terence Fletcher: “Hey, I can cut you any f*cking time I want.”

Andrew Neiman: “You would’ve cut me by now.”

25. “And here comes mister gay pride of the Upper West Side himself. Unfortunately, this is not a Bette Midler concert. We will not be serving Cosmopolitans and Baked Alaska, so just play faster than you give f*cking hand jobs, will you please?” – Terence Fletcher

Did These Whiplash Quotes Change How You View Your Dreams?

Everybody has a dream. Sadly, only some are determined enough to reach those dreams. As we’ve learned from Whiplash, the only way to succeed is to remain focused and keep our passion burning.

Those are what we truly need to succeed. If you ask why, it’s simple; how would you move forward if you’re not driven enough? The road to our dreams will forever be plagued with challenges; if you give up before you even scratch the surface, where will you end up?

In Whiplash, these challenges come from Terence’s attitude, Andrew’s disposition, and everyone else trying to succeed. If you don’t improve your attitude toward these things, you won’t be able to help yourself move up.

You have to see things in a more positive light and know that your mentor’s attitude pushes you to do better, and others’ ambitions serve as the fire that will keep your passion burning. Having a winner’s mindset is the first step, after all!

It’s challenging to figure out everything Whiplash wants to share with its viewers at first glance. So, we hope this list of its best quotes was a great starting point for you to figure things out!