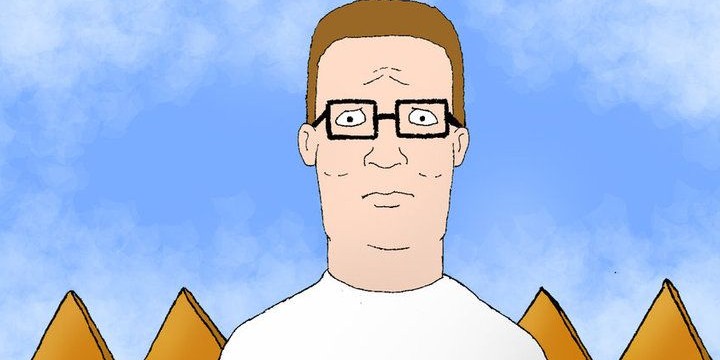 If you are having a very boring day, this list of the most hilarious Hank Hill quotes will certainly turn your day around.

Hank Hill is the main protagonist in the popular animated sitcom, King of the Hill.

He is known to be the typical American family guy who likes to drink beer, make barbeque, mow his very precious lawn, and root for the local baseball team.

He is also very authoritative, especially towards his only son, Bobby.

He is a workaholic and loves his job of being the assistant manager in a local propane shop, Strickland Propane.

Hank is very proud of his occupation which is very evident in a lot of scenes in the series.

Get to know Hank Hill of Arlen, Texas even more by reading these quotes.

His words of wisdom will definitely remind you of some people you know.

And don’t forget to check out these King of the Hill quotes and Dale Gribble quotes.

1. “There better be a naked cheerleader under your bed!”

2. “What the hell kind of country is this where I can only hate a man if he’s white?”

3. “Bobby, I didn’t think I’d ever need to tell you this, but I would be a bad parent if I didn’t. Soccer was invented by European ladies to keep them busy while their husbands did the cooking.”

4. “Why would anyone smoke weed when they could just mow a lawn?”

5. “I don’t have an anger problem, I have an idiot problem!”

7. “You know Kahn, we may deny our kids completely different deserts, but they both go to bed hungry, and that’s what really matters.”

8. “There’s something missing, something wrong—it’s like a pretty girl with short hair.”

9. “Dallas? I don’t want you going to Dallas at all! That place is crawling with crackheads and debutantes, and half of them play for the Cowboys.”

12. “That’s not the right sort of attitude for you to have. Whatever you do, you should do right, even if it’s something wrong.”

15. “Mister, I have not begun to project my anger onto you!”

17. “Maybe I should tie the long hair on your head to the short hair on your ass, and kick you down the street!”

18. “They weren’t dancing like you and I used to, Peggy. They were enjoying it.”

20. “Bobby, Al Yankovic blew his brains out in the late 80s after people stopped buying his records. He’s not worth getting in trouble over.”

22. “Dale’s losing it at Mega Lo Mart, Nancy. We need some traps for the rat, and a tranquillizer gun for…uh…also for the rat.”

26. “I wasn’t flirting with her. I didn’t even mention that I work in propane!”

27. “When I grow up, I want to sell propane and propane accessories, if my grades are good enough!”

28. “The only woman I’m pimping from now on is Sweet Lady Propane. And I’m tricking her out all over this town.”

29. “Now you listen to me, mister. I work for a livin’, and I mean real work, not writin’ down gobbledegook! I provide the people of this community with propane and propane accessories. Oh, when I think of all my hard-earned tax dollars goin’ to pay a bunch of little twig-boy bureaucrats like you, it just makes me wanna—oh, oh God.”

Hank Hill Quotes That Are Full of Wisdom

30. “But that shouldn’t stop you from pursuing your own dreams of wood, plywood, pressed fiberboard, and if you’ve got the talent, metal! Y’see, shop doesn’t have to happen in any special place—as long as it’s well lit, and the outlets are grounded. Because the shop is bigger than any classroom, or garage, or stupid policy that makes tools illegal—it’s in our hearts.”

31. “Bobby, some things are like a tire fire—trying to put it out only makes it worse. You just gotta grab a beer and let it burn.”

32. “Eight feet huh? Yeah, you see Khan, in this neighborhood, side fences have to be 5’6’’ or under. It’s not in the code or anything, it’s just something I’m trying to enforce.”

33. “Bobby, you can’t make an omelette without breakin’ eggs, and you can’t get on base without takin’ a swing.”

34. “I had to raise a lot of hell in there but sometimes that’s what you gotta do to get the right paperwork.”

35. “You shut your got-dang mouth or I’ll shove that Ditch Witch down your throat and dig a tunnel straight through to sunshine!”

36. “He thinks just ’cause I’m from Texas that means I’m a redneck—Chinese people and their stupid stereotypes!”

37. “Let me tell you, Bobby, there’s nothing funny about these sounds! What that person on your tape has is a medical disorder. Now you get ready for the game, okay?”

39. “Put your head between your six legs and kiss your butt goodbye!”

40. “You’re a regular Halloween hellraiser just like your old man. And I’m very disappointed in you!”

41. “Dang it, I am sick and tired of everyone’s asinine ideas about me. I’m not a redneck, and I’m not some Hollywood jerk. I’m something else entirely. I’m complicated!”

43. “Suffering is a part of every religion, Peggy. I mean, look at what the Jews have been through, and you never hear them complaining.”

44. “Dale, that’s asinine, and here are the four reasons why. First, you’re not gonna clone a super-warrior out of a guy who can’t even win a thumb-wrestling match. Two, you’ve spent your life swearing that the robots will eliminate the clones by the year 2010. So which is it, robots or clones? Three, you’ve already said you sympathize with the invading Mongolians of 2087, so you’d be the last one they’d send to fight them. And four, if you were from the future, you would have seen this coming.”

50. “I sell popcorn and popcorn accessories.”

56. “Mother of God, it’s all toilet sounds! Where did you record this?”

57. “Hey Khan. I thought I heard someone mixing concrete.”

61. “You know, Helen Keller was largely useless, but look how we remember her. Yep, the first lady of the American stage.”

62. “How is cutting down on pollution a government plot, Dale?”

63. “Why are you holding your cigarette like some kind of European Nazi in a movie?”

64. “This grout is supposed to stay white for twenty years. What’s it been, seventeen, eighteen? Peggy, where’s that receipt?”

67. “So you found yourself a project. Do you get the same, uh, high I get from lawn care?”

68. “We, of the Order of the Straight Arrow, call upon the spirit Wematanye, protector of the sacred ground that brings us cool water to drink and energy-efficient, clean-burning propane gas for all our sacred heating and cooking needs. Wematanye says, ‘respect the earth!’ She’s ours, by God, our taxes pay for Her. Also, it says here you gotta love all Her creatures. Let’s see…oh, here we go: Though we walk through the valley of the shadow of death, you’re gonna recommend us to the spirit in the sky, with liberty and justice for all. Wematanye is with you, and with Texas. Amen.”

70. “It’s different in high school, Peggy. Bullies react to Shakespeare like, well, like propane-emulsifiers react to carbon deposits. I can’t put it any plainer than that.”

Do You Know Anyone Who Reminds You of Hank Hill?

King of the Hills became one of the greatest and most popular animated series of all time. It showcases the typical life of an average American in a very creative and humorous manner. It also addresses a lot of societal concerns which can be relatable to a lot of its viewers.

Hank Hill, being the main character, is the very reflection of a man who loves to live with simplicity and contentment. He does his best in his endeavors and tries to influence people into doing what they love and doing it right. He is a very hands-on dad who always scolds his son, Bobby, for the impulsive and irresponsible decisions he makes and tries to lead him into the right path.

He educates us to be proud of our achievements in life and to be appreciative of what we own and who we are. Only then will we be genuinely satisfied.

Which of these quotes did you relate to the most? Do you have any favorites? Let us know in the comments section below.