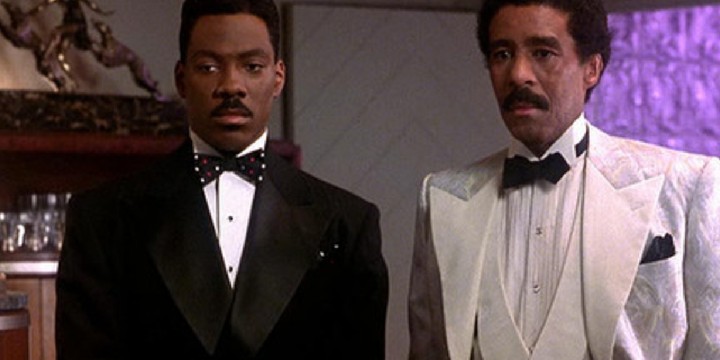 If you love a good mix of comedy and drama, these Harlem Nights quotes will fit right up your alley!

Eddie Murphy is one of the most iconic comedy kings who’s ever graced our screens. But, aside from being an excellent actor, he tried to pursue some of his other passions, like writing, directing, and producing. He thus ended up working on Harlem Nights.

The movie did not fare well with critics. Although that’s the case, Harlem Nights is a beloved movie that many still revisit years after its initial release. In a way, it zooms in on a piece of the Black experience during the late 1930s.

Indeed, Harlem Nights offers every viewer a variety of emotions to be experienced and lessons to be learned.

So, if you want to revisit Eddie Murphy’s character or just want to relive your favorite scenes from the movie, this list will be perfect.

And make sure to read these Trading Places quotes and Coming to America quotes.

Vera Walker: “I am in charge of the girls.”

Bennie Wilson: “The man didn’t say you was stealing, Vera. Now, come over here and sit down and shut the f*ck up!”

Vera Walker: “You shut the f*ck up, Bennie. I would tell you to kiss my ass too, but you probably can’t find it, you blind motherf*cker.”

7. “I think I’m going to leave, ‘cause you probably want to sit there by yourself, alone, and think about who you pissed off. So, I’ll let you have your space.” – Quick Brown

9. Sugar Ray: “Quick, you’re not a gangster. We’re not. We’re club owners. We run a dance hall. Calhoun—he’s a cold-hearted killer. He’ll have your ass killed. Now, the man probably doesn’t know about La Rue yet. But in the morning, he’s going to want you really dead. So, we got to find a place where we can lay low. Till we can run the scam and split.”

Quick Brown: “You telling me I should hide?”

Sugar Ray: “No. I’m telling you you’re gonna hide. You don’t hide, Quick, they’re gonna kill you. I’m not gonna let that happen to you. I didn’t come this far with you so you can prove you ain’t no punk and die. What are they gonna put on your tombstone? ‘Here lies a man, 27 years old. He died, but he ain’t no punk.’ Hey man, that’s bullshit. Okay? You know when you die? When you’re 89—got your children and your grandchildren around the bed—that’s cool. It ain’t cool to die at 27. I’m not gonna let you do that to yourself. I’m not gonna let you do it to me. ‘Cause they kill you, they’re gonna have to kill me. ‘Cause I’m gonna kill them.”

10. Sugar Ray: “Okay, the same fella who made the drop last year is gonna do it again. I want somebody on him. Vera, do you have a girl?”

Vera Walker: “I’ve got a girl whose pussy is so good, if you threw it up in the air it would turn into sunshine.”

Harlem Nights Quotes That Live in Our Heads Rent-Free

11. “He messed with the wrong nigger’s brother! Oh, Quick is mine!” – Crying Man

Quick Brown: “B*tch, I’m not playin’. You’re gonna be the nine-toe havingest, limpin’est b*tch in Harlem, you don’t put that razor away!”

Quick Brown: “My father’s dead, too.”

14. Vera Walker: “Benny, you put this orange juice back in here, ain’t nothin’ left but a swallow!”

Bennie Wilson: “Then swallow it and shut the f*ck up!”

Quick Brown: “I killed her.”

Sugar Ray: “What the f*ck you talking about.”

Vera Walker: “Kiss my ass, Sugar. I’ve got to watch my girls until the last trick is gone. And I’m not about to ask no customer to roll over so I can punch some goddamn clock. Now, this is your place, but I am in charge of the girls—and you can just kiss my ass.”

18. Phil Cantone: “Okay Ray, here’s the deal. I got a call from a friend of mine by the name of Bugsy Calhoun. He told me you’re sitting on a little gold mine here. Now don’t get me wrong. I know there’s always gonna be after-hour places. We pretty much leave them alone when the money’s not that significant, but you guys are doing about 10 to 15,000 a week. I mean, that’s a lot of money. And to be perfectly honest. Mr. Calhoun and myself want some of it.”

Sugar Ray: “How much money you talking about, you maggot motherf*cker?”

Phil Cantone: “No, no, no. You’re robbing the system, Ray. What do you want—sympathy from me? You’re criminals, for Christ’s sake. And I think it’s a pretty fair deal. I wanted more, but Bugsy said it was fair. I mean, he’s a real softy, Bugsy. I mean, if it was up to me, I’d give you jigs just enough money to function. So when I see you guys with the—with the fancy suits and cars and nice houses, and I’m living in a f*cking hovel—I mean, that bothers me.”

Bennie Wilson: “Oh, he proposed to her four times already, said he would leave his wife and kids and convert from Catholic to Baptist. Now you know that’s some mean pussy to make a man change gods.”

Did These Harlem Nights Quotes Give You a Better Understanding of Black Culture in the 1930s?

Harlem Nights received quite a lot of criticism when it was first released. Additionally, it was even referred to as a letdown when it comes to Black cinematic experiences. Although that’s the case, no one can deny its impact on pop culture and the comedy-drama genre.

The movie undoubtedly had some scenes with violence, gore, and profanities. After all, the plot did focus on Sugar Ray and Quick—owners of an illegal casino, who are being chased by the police. However, they were able to strike a balance between these dark bits of humor with lighter—and funnier—interactions between the characters.

It’s a hard feat, but Eddie Murphy’s touch was something we can’t help but appreciate. In a more profound sense, this balance between dark humor and light comedy reflects many Black people’s experiences. Sometimes, the only thing that would keep them going despite the pain and discrimination is by taking a lighter view of life.

It’s by laughing through the bad times that people can move forward—this is a message from Harlem Nights that not a lot of people might think about. So, while it’s considered a flop by critics, the movie did not disappoint when it comes to the lessons we can learn through it.