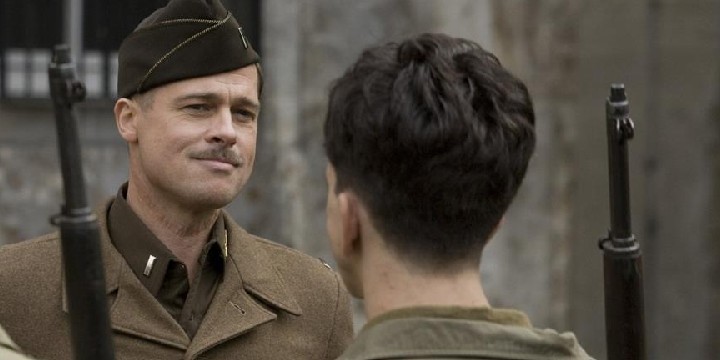 These Inglourious Basterds quotes will inspire you to break free from oppression and avoid vengeance.

The most notable star and protagonist of Inglourious Basterds is Lieutenant Aldo Raine. For those who haven’t watched the movie yet, the Basterds is a unit of soldiers with a mission to instill fear and kill Nazis to stop the dictatorship.

The movie’s premise is based on everything that transpired when Standartenführer Hans Landa, one of the members of the Nazis, killed the whole Jewish family of Shosanna Dreyfus. After that, Shosanna lived her life full of hate and desired to get revenge for her loved ones.

When the Basterds, Shosanna, and the Nazis crossed paths, it resulted in several deaths and tragedies. They are proof that true peace will never be achieved through oppression and that revenge will never give you real satisfaction in life.

Hate, vengeance, and violence will slowly bring the world down. If you want to know more about the movie’s lessons, read through this list which will tell you more about control, revolution, and revenge!

And don’t forget to check out these Pulp Fiction quotes and Fast & Furious quotes.

2. “You probably heard we ain’t in the prisoner-takin’ business. We in the killin’ N*zi business. And cousin, business is a-booming.” – Lieutenant Aldo Raine

3. “You know something, Utivich? I think this just might be my masterpiece.” – Lieutenant Aldo Raine

Standartenführer Hans Landa: “Are you mad? What have you done? I made a deal with your general for that man’s life!”

Lieutenant Aldo Raine: “Yeah, they made that deal, but they don’t give a f*ck about him. They need you.”

Standartenführer Hans Landa: “You’ll be shot for this!”

Lieutenant Aldo Raine: “Nah, I don’t think so. More like chewed out. I’ve been chewed out before.”

Shosanna Dreyfus: “Filling the cinema with Nazis and burning it to the ground.”

8. “I love rumors! Facts can be so misleading, where rumors, true or false, are often revealing.” – Standartenführer Hans Landa

9. Standartenführer Hans Landa: “Tell me, Aldo, if I were sitting where you’re sitting, would you show me mercy?”

Lieutenant Aldo Raine: “‘Looks like the shoe’s on the other foot.’ Yeah, I was just thinking that.”

10. “What a tremendously hostile world that a rat must endure. Yet not only does he survive, he thrives. Because our little foe has an instinct for survival and preservation second to none. And that, Monsieur, is what a Jew shares with a rat.” – Standartenführer Hans Landa

11. “Watching Donny beat Nazis to death is the closest we ever get to going to the movies.” – Lieutenant Aldo Raine

12. Sergeant Donny Donowitz: “You get that for killin’ Jews?”

13. “Can you, Americans, speak any other language besides English?” – Bridget von Hammersmark

14. Standartenführer Hans Landa: “Monsieur LaPadite, are you aware of the nickname the people of France have given me?”

Perrier LaPadite: “I have no interest in such things.”

Standartenführer Hans Landa: “But you’re aware of what they call me?”

Standartenführer Hans Landa: “What are you aware of?”

Perrier LaPadite: “That they call you the ‘Jew Hunter.’”

Standartenführer Hans Landa: “Precisely! I understand your trepidation in repeating it. Heydrich apparently hates the moniker the good people of Prague have bestowed on him. Actually, why he would hate the name ‘hangman’ is baffling to me. It would appear he has done everything in his power to earn it. I, on the other hand, love my unofficial title, precisely because I’ve earned it.”

15. Lieutenant Aldo Raine: “You didn’t say the g*dd*mn rendezvous was in a f*ckin’ basement.”

Lieutenant Aldo Raine: “You said it was in a tavern.”

Lieutenant Archie Hicox: “It is a tavern.”

16. Bridget von Hammersmark: “I can see since you didn’t see what happened inside, the Nazis being there must look odd.”

Lieutenant Aldo Raine: “Yeah, we got a word for that kinda odd in English. It’s called suspicious.”

17. Lieutenant Aldo Raine: “My name is Lt. Aldo Raine, and I’m putting together a special team, and I need me eight soldiers. Eight Jewish-American soldiers. Now, y’all might’ve heard rumors about the armada happening soon. Well, we’ll be leaving a little earlier. We’re gonna be dropped into France, dressed as civilians. And once we’re in enemy territory, as a bushwhackin’ guerrilla army, we’re gonna be doing one thing and one thing only—killing Nazis. Now, I don’t know about y’all, but I sure as hell didn’t come down from the g*dd*mn Smoky Mountains, cross 5,000 miles of water, fight my way through half of Sicily and jump out of a f*ckin’ airplane to teach the Nazis lessons in humanity. N*zi ain’t got no humanity. They’re the foot soldiers of a Jew-hatin’, mass murderin’ maniac and they need to be destroyed. That’s why any and every son of a b*tch we find wearin’ a N*zi uniform, they’re gonna die. Now, I’m the direct descendant of the mountain man Jim Bridger. That means I got a little Injun in me. And our battle plan will be that of an Apache resistance. We will be cruel to the Germans, and through our cruelty, they will know who we are. And they will find the evidence of our cruelty in the disemboweled, dismembered, and disfigured bodies of their brothers we leave behind us. And the Germans won’t be able to help themselves but to imagine the cruelty their brothers endured at our hands, and our boot heels, and the edge of our knives. And the German will be sickened by us, and the German will talk about us, and the German will fear us. And when the Germans close their eyes at night, and they’re tortured by their subconscious for the evil they have done, it will be with thoughts of us they are tortured with. Sounds good?”

Lieutenant Aldo Raine: “That’s what I like to hear. But I got a word of warning for all you would-be warriors. When you join my command, you take on debit. A debt you owe me personally. Each and every man under my command owes me 100 N*zi scalps. And I want my scalps. And all y’all will git me 100 N*zi scalps, taken from the heads of 100 dead Nazis. Or you will die trying.”

Inglourious Basterds Quotes for Those Who Love War Movies

Standartenführer Hans Landa: “A detective. A damn good detective. Finding people is my specialty. So, naturally, I work for the Nazis to find people, and yes some of them were Jews. But ‘Jew Hunter?’ It’s just a name that stuck.”

Smithson Utivich: “Well, you do have to admit, it is catchy.”

Standartenführer Hans Landa: “Do you control the nicknames your enemies bestow on you? ‘Aldo the Apache’ and the ‘Little Man?’”

Smithson Utivich: “What do you mean the ‘Little Man?’”

Smithson Utivich: “The Germans’ nickname for me is the ‘Little Man?’”

Standartenführer Hans Landa: “And as if to make my point, I’m a little surprised how tall you were in real life. I mean, you’re a little fellow, but not circus-midget little, as your reputation would suggest.”

19. Standartenführer Hans Landa: “The kind you wouldn’t have the authority to make. However, I’m sure this mission of yours has a commanding officer. A general. I’m betting for OSS would be my guess. Ooh! That’s a bingo! Is that the way you say it? ‘That’s a bingo?’”

Standartenführer Hans Landa: “Bingo! How fun! But I digress. Where were we? Yeah! Make a deal. Over there is a very capable two-way radio and sitting behind it is a more than capable radio operator named Hermann. Get me someone on the other end of that radio with the power of the pen to authorize my, let’s call it, the terms of my conditional surrender if that tastes better going down.”

Lieutenant Aldo Raine: “You know, where I’m from—.”

Standartenführer Hans Landa: “Yeah, where is that exactly?”

Lieutenant Aldo Raine: “Maynardville, Tennessee. I’ve done my share of bootlegging. Up there, if you engage in what the federal government calls illegal activity, but what we call just a man trying to make a living for his family, selling moonshine liquor, it behooves oneself to keep his wits. Long story short, we hear a story too good to be true, it ain’t.”

Standartenführer Hans Landa: “Sitting in your chair, I would probably say the same thing, and 999,999 times out of 1,000,000, you would be correct. But in the pages of history, every once in a while, fate reaches out and extends its hand. What shall the history books read?”

20. Lieutenant Archie Hicox: “Well, if this is it, old boy, I hope you don’t mind if I go out speaking the king’s?”

Lieutenant Archie Hicox: “There’s a special rung in hell reserved for people who waste good scotch. And seeing as I might be rapping on the door momentarily. I must say, damned good stuff, sir. Now, about this pickle, we find ourselves in.”

Did This Collection Inspire You to Let Go of Your Grudges?

Humans don’t own the world; we’re just mere visitors. This is precisely why we must prove that we deserve the chance given to us to live here by avoiding anything that would harm others. Instead of spreading sorrow and ruling the world with dictatorship, let’s lead a life full of joy, compassion, and kindness.

Through Inglourious Basterds, we are reminded that being more privileged than others never gives us a right to over-control them. Oppression will never help anyone out, even yourself. It will just turn everything into a mess and divide people within our society.

Others will stand for what is right, but others will go with the flow of oppression to gain power in society. As a result, our world will never achieve peace.

In the same way, living your life with hate is just another way to punish yourself. Yes, it might feel gratifying to seek revenge on those who hurt you and your loved ones. But, at the end of the day, vengeance will reopen the wound of the past and give you more damage in the long run.

The best way to live is to lead a peaceful and compassionate life. Let go of being manipulative or vengeful, and let God do the rest of the work. We have no control over the toxic emotions that overtake us, but we do control how we react to them!