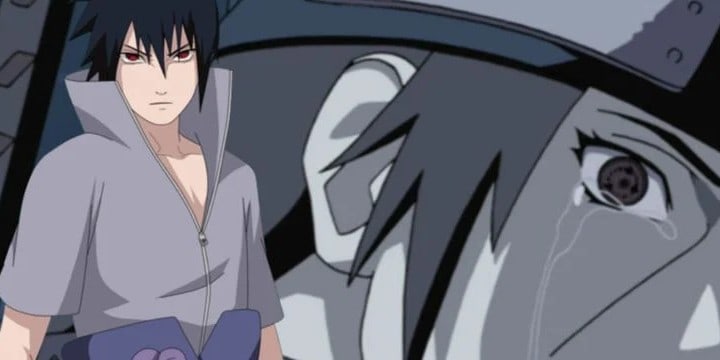 Here are the top 50 Itachi Uchiha quotes that will give you inspiring, but powerful and thought provoking thoughts from the series’ hero hidden within the shadows.

Itachi Uchiha is one of the most inspiring characters in Naruto and Naruto: Shippuden who was initially portrayed as a villain, but in the end, was revealed as the most loyal and devoted shinobi and brother in the show.

And don’t make sure to read these Madara Uchiha quotes and Naruto Uzumaki quotes.

1. “Those who cannot acknowledge themselves, will eventually fail.”

2. “We are humans, not fish. We don’t know what kind of people we truly are until the moment before our deaths.”

3. “Those who turn their hands against their comrades are sure to die a terrible death. Be prepared.”

4. “I always lied to you, telling you to forgive me. I used these hands to keep you at distance. I did not want you to get involved.”

6. “People’s lives don’t end when they die. It ends when they lose faith.”

7. “Their reality may all be a mirage. Can we consider them to simply be living in their own world, shaped by their beliefs?”

8. “As death comes to embrace you, you will realize what you are. That’s what death is, don’t you think?”

9. “It is not wise to judge others based on your own preconceptions and by their appearances.”

10. “You and I are flesh and blood. I’m always going to be there for you, even if it’s only as an obstacle for you to overcome—even if you do hate me. That’s what big brothers are for.”

11. “People live their lives bound by what they accept as correct and true. That’s how they define reality.”

12. “I failed, and speaking to you now, like this, isn’t going to undo the permanent damage that’s already been done to you.”

14. “Those who forgive themselves and are able to accept their true nature, they are the strong ones!”

15. “That’s why I wanted to show you the truth, even if it’s just a little. And no matter what you decide to do from here on out, you never have to forgive me. I will always love you.”

16. “No single thing is perfect by itself. That’s why we’re born to attract other things to make up for what we lack.”

17. “Self-sacrifice—a nameless shinobi who protects peace within its shadow. That is a true shinobi.”

18. “Don’t cry, Sasuke. Your big brother is here to protect you, no matter what happens.”

19. “Knowledge and awareness are vague, and perhaps better called illusions.”

20. “Everyone lives within their own subjective interpretation.”

21. “You’re such a child. You talk of nothing but pipe dreams. There are times when people must make painful choices.”

23. “Growth occurs when one goes beyond one’s limits. Realizing that is also part of training.”

24. “The people of this clan are all the same. You focus on the trivial, and lose sight of what’s most important.”

25. “Change is impossible in this fog of ignorance. How can we evolve when regulation is all we know?”

26. “Your comrades are there to make up for what you cannot do and to prevent you from ignoring things that you actually might have been able to do.”

27. “At this moment, I am euphoric. Not because of any phony Shinobi’s blessing, but because I’m enlightened by my intelligence.”

28. “I’ve had enough, there’s no hope left for this pathetic clan.”

Itachi Uchiha Quotes on Knowing Your Purpose and Staying Grounded

30. “I’ll admit that you’re stronger than before. But because of that, you seem to have lost sight of what’s truly important.”

31. “You once said it was everyone who cares about you who helped you get where you are now. If you forget others because you have power, and become arrogant and egotistical, you’ll eventually become just like Madara.”

32. “If you want to kill me, despise me, hate me, and live in an unsightly way, tun, and cling to life, and then someday, when you have the same eyes as I do, come before me.”

33. “I actually don’t think something like perfection exists. That is, I think, why we are born able to absorb things; and by comparing ourselves with something else, we can finally head in a good direction.”

34. “Now I feel that maybe knowing who I actually am is the key to reaching perfection, because that means knowing what I can and cannot do.”

35. “You aren’t even worth killing, foolish little brother.”

36. “I think we start walking in the right direction only after we start getting our counterparts beside us.”

40. “The people of the village who once abhorred you, have begun to admire you. They think of you as a comrade. It’s because you fought hard for their acceptance.”

41. “No matter how powerful you become, do not try to shoulder everything alone.”

43. “Teachings that do not speak of pain have no meaning, for humankind cannot gain anything in return.”

44. “He who forgives and acknowledges himself—that is what it truly means to be strong!”

45. “The village does have its dark side and its inconsistencies, but I’m still Konoha’s Itachi Uchiha.”

46. “No, it means to forgive yourself for what you aren’t able to do.”

47. “Any technique is worthless before my eyes.”

48. “If you want to know who you are, you have to look at your real self and acknowledge what you see.”

49. “If I had been open with you from the start, and looked you straight in the eyes, and told you the truth, then I wouldn’t have had to stand before you, from above, as a failure, telling you all of this. I failed.”

Did These Quotes Bring Light to Itachi Uchiha’s Good Deeds?

Itachi Uchiha was one of the most mysterious, but wise characters in the series. And though many have looked at him in a negative light at the beginning, we later find out that he was actually one of the good guys who sacrificed his life to protect his village and his brother. His undying loyalty and love for his village and brother proved to be the main driving force for every decision and action he made. Indeed, Itachi Uchiha is one of the most brilliant characters in the show and he managed to deliver some impactful messages to all the readers and viewers of Naruto.

Were you able to see the goodness hidden in Itachi Uchiha’s decisions? What’s your favorite quote from this collection? Tell us about it down below.