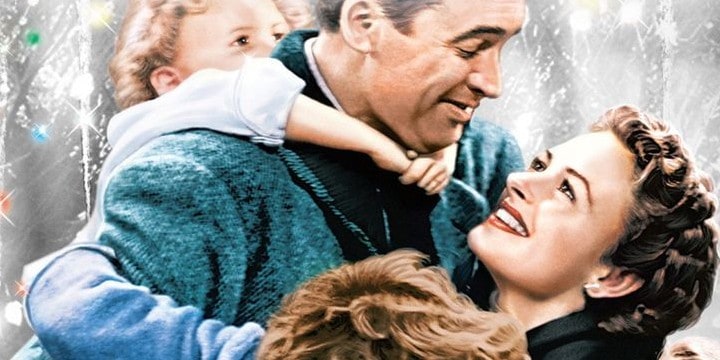 There’s no better way to remind yourself of the blessings you have received in life than through these It’s a Wonderful Life quotes.

With the top 50 quotes from the movie included in this list, you’re sure to find one or two that will make you feel thankful for the life you’re living.

It’s a Wonderful Life is an American film released in 1946, but even decades after its release, it’s still considered as one of the most inspirational and beloved movies in the American film industry.

Throughout the years, the movie also became synonymous with Christmas, and rightly so, as it contains a bunch of words of wisdom that will fit right into the spirit of the holidays.

Read the full list below to find out more.

And don’t forget to check out these A Christmas Story quotes and National Lampoon’s Christmas Vacation quotes too.

2. “Peter Bailey was not a businessman. That’s what killed him. Oh, I don’t mean any disrespect to him, God rest his soul. He was a man of high ideals. So-called. But ideals without common sense can ruin this town.” – Mr. Potter

3. “There is no George Bailey. You have no papers, no cards, no driver’s license, no 4F card, no insurance policy.” – Clarence

6. “I know, I know. But you just go to sleep, and then you can dream about it, and it’ll be a whole garden.” – George Bailey

7. “You sit around here, and you spin your little webs, and you think the whole world revolves around you and your money. Well, it doesn’t, Mr. Potter. In the whole vast configuration of things, I’d say you were nothing but a scurvy little spider!” – George Bailey

8. “Dear Father in Heaven, I’m not a praying man, but if you’re up there and you can hear me, show me the way. Show me the way.” – George Bailey

9. “You’ve been given a great gift, George—a chance to see what the world would be like without you.” – Clarence

Beautiful and Heartwarming Quotes From It’s a Wonderful Life

10. “Look, Daddy. Teacher says, every time a bell rings, an angel gets his wings.” – Zuzu Bailey

11. “No, worse. He’s discouraged. At exactly 10:45PM Earth time, that man will be thinking seriously about throwing away God’s greatest gift.” – Senior Angel

12. “You know, George, I feel that in a small way we are doing something important. It’s deep in the race for a man to want his own roof and walls and fireplace, and we’re helping him get those things in our shabby little office.” – Pa Bailey

13. “I couldn’t face being cooped up for the rest of my life in a shabby little office—spending all your life trying to figure out how to save three cents on a length of pipe. I’d go crazy. I want to do something big and something important.” – George Bailey

14. “What is it you want, Mary? What do you want? You want the moon? Just say the word and I’ll throw a lasso around it and pull it down. Hey. That’s a pretty good idea. I’ll give you the moon, Mary.” – George Bailey

15. “Strange, isn’t it? Each man’s life touches so many other lives. When he isn’t around, he leaves an awful hole, doesn’t he?” – Clarence

17. “You see, George, you’ve really had a wonderful life. Don’t you see what a mistake it would be to throw it away?” – Clarence

18. “Remember, George—no man is a failure who has friends.” – Clarence

19. “You call this a happy family? Why do we have to have all these kids?” – George Bailey

It’s a Wonderful Life Quotes About Love and Honor

20. “You’re right when you say my father was no businessman. I know that. Why he ever started this cheap, penny-ante Building and Loan, I’ll never know. But neither you nor anyone else can say anything against his character.” – George Bailey

21. “You know what we’re gonna do? We’re gonna shoot the works. A whole week in New York. A whole week in Bermuda. The highest hotels. The oldest champagne. The richest caviar and the hottest music and the prettiest wife.” – George Bailey

23. “A toast to my big brother George—the richest man in town.” – Harry Bailey

25. “Why, she lights up like a firefly whenever you are around.” – Ma Bailey

29. “Why don’t you kiss her instead of talking her to death?” – House Owner

31. “Do you know how long it takes a working man to save $5,000? Just remember this, Mr. Potter—that this rabble you’re talking about, they do most of the working and paying and living and dying in this community. Well, is it too much to have them work and pay and live and die in a couple of decent rooms and a bath? Anyway, my father didn’t think so. People were human beings to him. But to you, a warped, frustrated old man, they’re cattle. Well in my book, my father died a much richer man than you’ll ever be!” – George Bailey

35. “I’m a rich tourist today. How about driving me home in style?” – George Bailey

39. “If it wasn’t me talking, I’d say you were the prettiest girl in town.” – George Bailey

Funny and Humorous Quotes From It’s a Wonderful Life

40. “This is a very interesting situation!” – George Bailey

41. “A man doesn’t get in a situation like this every day.” – George Bailey

42. “But George Bailey is not a common, ordinary yokel. A young man—the smartest one in the crowd, mind you. A young man who has to sit by and watch his friends go places because he’s trapped. Do I paint the correct picture or do I exaggerate?” – Mr. Potter

43. “What’s a pretty girl like you marrying this two-headed brother of mine?” – George Bailey

Have You Realized the Things You Should Be Thankful For?

With everything that’s going on, it’s easy to take life for granted. Time moves on at an incredibly fast pace, and sometimes, we feel like we just can’t keep up.

Especially during this time that we’re all cooped up in our homes, we may feel discouraged, uninspired, and tired of our routines.

However, through It’s a Wonderful Life, we’re once again reminded of how lucky we are just to be alive. Everyone has a purpose in this world, and our very existence is already affecting others’ existence immensely.

As Clarence says in the film, ‘Each man’s life touches so many other lives, and when he isn’t around, he leaves an awful hole, doesn’t he?’ We touch a lot of people’s lives in our journey here on earth, and other people also touch ours.

We should appreciate how blessed and privileged we are to be living in such a wonderful world—a world full of magic and wonder that’s made even more beautiful by our interconnectedness and relationships with other people.

What do you think about the life you’re living? Are you reminded of how blessed you are through this collection? Let’s list down the things we’re grateful for in the comments section below!