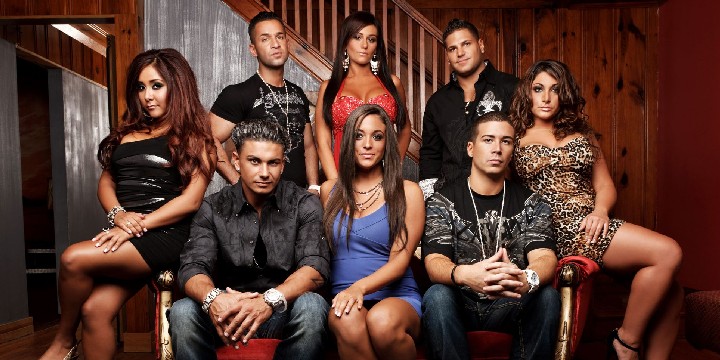 Being with our friends is one of the happiest times in our lives, which is why we’ve compiled a list of 150 Jersey Shore quotes to remind you of the wild times you had with your gang.

Jersey Shore was an American television series that debuted in December 2009.

It became popular because it realistically depicted events in the lives of a group of friends. It was produced by MTV and was developed by SallyAnn Salsano.

In this collection, we’ll follow the story of the six unique individuals and learn more about them.

So, if you want to cry, laugh, and celebrate, keep reading!

See the full collection below.

And don’t forget to check out these Grey’s Anatomy quotes and Letterkenny quotes.

2. “My only rule—never fall in love at the Jersey Shore.” – Ronnie Ortiz-Magro

3. “I was born and raised a Guido. It’s just a lifestyle, it’s being Italian, it’s representing family, friends, tanning, gel, everything.” – Paul DelVecchio

5. “You are the worst argument person ever!” – Mike Sorrentino

8. “I mean, you can hate on me all you want, but what can you possibly say to somebody who looks like Rambo, pretty much, with his shirt off?” – Mike Sorrentino

10. “How do you go in a f*ck*ng jacuzzi with a thong and a bra? Wear a thong bikini—that’s a little bit more classier if you’re gonna wear anything at all, ya know what I mean?” – Angelina Pivarnick

12. “Mike can be a nice guy, like, he shows his good side then he shows his jerk off side. That’s what I like; a good guy and a jerk off, it’s all in the same.” – Nicole Pollizi

13. “You have to remember that reality shows capture your worst moments.” – Nicole Pollizi

14. “If that b*tch still plays laser tag, she’s too young for you, bro.” – Paul DelVecchio

Jersey Shore Quotes That You Will Never Forget

16. “It sucks, but no Long Islands or margaritas when you drink. It has to be straight vodka.” – Nicole Pollizi

17. “There’s no way I’m going to Jersey without my hair gel, can’t leave without my gel.” – Paul Delvecchio

18. “I am like a praying mantis—after I have sex with a guy I will rip their heads off.” – Jenni Farley

19. “The only person I’ve had sex with on Jersey Shore is my boyfriend.” – Nicole Pollizi

21. “I have a bad habit of playing little emotional games with men. When they date me, it’s cool in the beginning, we do our thing in the first month, and then I send them on a rollercoaster ride to hell.” – Jenni Farley

23. “I think the statue of David is pretty sexy. I’d do him.” – Deena Nicole Cortese

24. “I told Pauly D to start the grill and he puts charcoal in a gas grill, then he asks me to light it and we were this close to pretty much blowing up the house.” – Mike Sorrentino

26. “I’m not trying to fall in love on the Jersey Shore. I’m just trying to hook up.” – Paul DelVecchio

29. “Men may be from Mars and women from Venus, but I’m from the Jersey Shore.” – Jenni Farley

31. “When you’re tanner, you feel hotter and sexier. You should try it.” – Nicole Polizzi

36. “It’s hard for people to see you one way, but you’re really the other way, so it’s kind of like, ‘Who am I, who are you?’ Sometimes, I confuse even myself.” – Nicole Polizzi

38. “My hair didn’t even move an inch and I was in and out of the water. My hair’s windproof, waterproof, soccerproof, motorcycle proof. I’m not sure if my hair’s bulletproof, I’m not willin’ to try that.” – Paul DelVecchio

39. “This is the biggest night of my entire life and everybody’s career rides on my DJ set.” – Paul DelVecchio

41. “She starts charging at me like a f*ck*ng hippo.” – Nicole Polizzi

42. “JWoww and her boobies are going to Italy.” – Jenni Farley

44. “I look like a piece of sausage next to these meatballs. I’m gonna stand in the middle so it looks like a big dick.” – Paul DelVecchio

Hilarious Jersey Shore Quotes That Will Make You Laugh Out Loud

46. “It’s obvious that Sammi has a crush on me and that’s obvious. It goes back to the days of prehistoric kindergarten.” – Mike Sorrentino

47. “You never really see me acting a fool on TV.” – Vinny Guadagnino

48. “Down here at the Shore, one minute you’ve got three girls in the Jacuzzi, the next minute somebody’s in jail and you have to bail them out. That’s what happens down at the Shore.” – Mike Sorrentino

49. “I’m trying to build an empire, because after this, I cannot get a normal job.” – Nicole Polizzi

52. “A walking holiday? What does that mean? Are you gonna give out candy? Like I don’t get it.” – Samantha Giancola

53. “I don’t eat friggin’ lobster or anything like that. Because they’re alive when you kill it.” – Nicole Polizzi

54. “I am the pimp daddy Mac on this whole place.” – Paul DelVecchio

55. “The toilet is clogged because I live with farm animals.” – Vinny Guadagnino

56. “You better send roses to the house, you feel me? Roses, dawg. With pickles in them—fried pickles!” – Paul DelVecchio

59. “People should go to school at a bar.” – Deena Nicole Cortese

61. “I like to be with my boyfriend at all times. Do you get that?” – Samantha Giancola

62. “Yes, I had sex. Like, hello, you’re gonna have sex if you’re into somebody. It’s natural.” – Samantha Giancola

64. “Before Jersey Shore, I was a DJ struggling to promote, deejaying six nights a week and hustling to pack clubs.” – Paul DelVecchio

65. “You don’t come in here on Sunday with a big banana and expect everything to be peaches.” – Paul DelVecchio

69. “As my stomach feels like it’s gonna explode, I don’t stop eating. It makes me realize what a gluttonous piece of sh*t I am.” – Vinny Guadagnino

70. “I’m out of gel—Justin Bieber eat your heart out.” – Paul DelVecchio

71. “Whatever, I forgot to put my underwears on.” – Deena Nicole Cortese

73. “You need sucky things in life to make you stronger.” – Vinny Guadagnino

74. “Have a coffee then it will flow out your b*tth*l* like a freakin’ rainstorm.” – Paul DelVecchio

76. “Being called ‘Angelina’ is like one of the worst things you could ever be called.” – Paul DelVecchio

77. “This is probably the best accomplishment I’ve had in a long time—to kick the sh*t out of Jenni.” – Samantha Giancola

80. “How does it feel, Jenni, to have the crap beat out of you by me? I’m basking in it right now.” – Samantha Giancola

82. “Funny how people become p*ss**s all of the sudden.” – Angelina Pivarnick

83. “Yo, shut your mouth, you dirty little hamster.” – Mike Sorrentino

84. “You should know about trashy, baby. You’re from Staten Island!” – Deena Nicole Cortese

87. “If you leave, I’m going to stuff your f*ck*ng nose with tampons.” – Ronnie Ortiz-Magro

88. “Jenni’s t*ts definitely defy gravity. I think Albert Einstein should come back and rewrite his laws of physics and work it around Jenni’s t*ts.” – Mike Sorrentino

90. “You know what I think it is? Your eyebrows are so bushy, they collect so much more bacteria than normal eyebrows would.” – Paul DelVecchio

Jersey Shore Quotes on Being Aggressive

93. “If you look up ‘too much swag’ in the dictionary, there’ll be a great big picture of my face.” – Paul DelVecchio

95. “No one touches my clams. I’ll cut your fingers off.” – Paul DelVecchio

96. “Do you want to get beat up by an Israeli chick?” – Paul DelVecchio

101. “You better grab your girl tight when I’m around, ’cause I know she’s grillin’ me.” – Mike Sorrentino

104. “I don’t give a f*ck. You had my sloppy seconds. Good for you and obviously you’re a loosey goose because he got it in.” – Nicole Polizzi

107. “I’m taking his sperm and making babies out of it.” – Samantha Giancola

109. “Have sex with an old man, steal a plant, get arrested, and then do whatever.” – Paul DelVecchio

110. “If you guys want me to go downstairs for make-up sex, let me know.” – Samantha Giancola

114. “I am not f*ck*ng any of my roommates, therefore I should not be cleaning up after their sh*t.” – Mike Sorrentino

115. “I want the Guidettes to c*m in their pants when they hear my music.” – Paul DelVecchio

120. “This kid is in love. JWoww’s p*ss* must be rainbows and pots of treasure.” – Ronnie Ortiz-Magro

123. “You stalked my whole life on the boardwalk.” – Paul DelVecchio

124. “You should know the truth.” – Nicole Polizzi and Jenni Farley

127. “You shouldn’t have to change for any man, you find a man who will accept you.” – Jenni Farley

Jersey Shore Quotes That Can Get Annoying

134. “I never thought somebody would make Snooki look like a rocket scientist but Deena takes the cake.” – Mike Sorrentino

Other Jersey Shore Quotes to Remind You of the Show

142. “Dominican girls are hot because they can dance, they can move, they got tans, big butts, and nice full lips.” – Nicole Polizzi

144. “I thought you were just being drunk and stupid.” – Deena Nicole Cortese

145. “If this relationship continues, I’ll kill myself.” – Mike Sorrentino

147. “Somebody marshmallowed the house.” – Nicole Polizzi

149. “They have defied the law of intelligence.” – Deena Nicole Cortese

150. “When you go into battle, you need to have some friends with you so that just in case a grenade gets thrown at you, you know, one of your buddy takes it first.” – Paul DelVecchio

Jersey Shore was a reality television show that followed the lives of six friends who run a souvenir T-shirt shop in Seaside Heights, New Jersey. They liked to party and drink all night. Since the majority of the cast are Italian, the idea was to contrast daily life in Italy with the daily lives of Italian-Americans in Jersey Shore.

At some point in our lives, we all need to get away from the chaos and celebrate with our friends. Sometimes, we just want to know how they are doing in life, if they have any good news to share, and if they have anything to talk about.

This show explored the wonderful journey of friends, the reality of love, and the importance of being true to yourself. We hope that these Jersey Shore quotes made your day!

Did you enjoy reading these Jersey Shore quotes? Do you have any favorites? Comment down below!