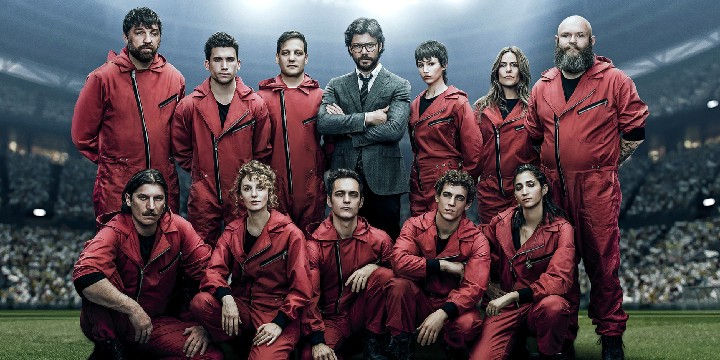 Check out this list of the top 70 Money Heist quotes that’ll speak to anyone looking for a show that will strengthen their resolve!

Money Heist is among the most successful original shows on Netflix.

With its bold ideas and intense episodes, it is no surprise that it has become a phenomenon worldwide.

Fans continue to prove their love and support for the show by playing the soundtrack on repeat and purchasing different types of merchandise.

But, more than the hype, Money Heist has become a symbol of resistance.

People are being pushed to fight against tyranny and abuse whenever they see their favorite characters on the show.

The iconic mask and red suit indeed inspired many to protest against all forms of abuse—in any way they can, big or small.

It may be a work of fiction, but the true-to-life portrayal of the world’s workings makes it worth watching over and over.

Here’s a collection of our favorite quotes from the series! Make sure you don’t miss out and read through to the end.

And don’t forget to read these Doctor Who quotes and Schitt’s Creek quotes.

1. “The things that are really important in life have a high price. Rebellion. Liberty. Ideals.” – Berlin

2. “After all, what’s more human than the fight for survival?” – Tokyo

3. “Weakness is not in us, it is in what we have outside.” – The Professor

4. “In the end, love is a good thing for everything to fall apart.” – Tokyo

5. “Things we can’t see affect our lives much more than we think.” – Tokyo

6. “In moments like this, you feel death creeping in, and you know nothing will ever be the same. But you need to do whatever it takes to survive.” – Tokyo

7. “They say love can move worlds but the truth is, hate can be just as strong.” – Tokyo

8. “Sometimes distance is the only way to find peace. So you can heal your wound.” – Berlin

9. “Sometimes, a truce is the most important part of a war.” – The Professor

11. “Only a true thief feels like he owns someone else’s property.” – Berlin

12. “A lot of people believe we only find one true love in our lives. But what they don’t realize is you can have several lives.” – Tokyo

13. “And at the end of the day, it’s not about doing everything the right way, it’s about loving.” – Julia

14. “I believe you keep on living in the final thought you have the moment before you die.” – Tokyo

16. “Death can be the greatest opportunity of your life.” – Berlin

28. “When someone is in love, they look through rose-tinted glasses. Everything’s wonderful. They transform into a soft teddy bear that’s smiling all the time.” – The Professor

29. “The second any blood is shed, we will no longer be Robin Hood. We will just be a bunch of plain m*th*rf*ck*ng punks.” – The Professor

30. “You’re the sexiest woman in the world but I love you for your brains.” – The Professor

31. “Betrayal doesn’t depend on how much or how deeply you love someone. It depends on the magnitude of the dilemma put in front of you.” – The Professor

32. “I do not want to ignore this, this desire that I feel alive because I’ve never had so much.” – The Professor

33. “The plan is designed to survive any setbacks, including my death.” – The Professor

34. “Maybe we’re all immature to some extent.” – The Professor

35. “The most important moments are the ones that make you realize there’s no turning back. You’ve crossed a line, and you’re stuck on the other side now.” – Tokyo

36. “There’s always happier days to remember. And the more f*ck*d up things are, the happier those days seem to be.” – Tokyo

37. “Happiness is like lightning, blink and you miss it. After that came the fall. When you reach heaven the fall is devastating.” – Tokyo

38. “Paradise is wonderful when your life is dull and full of traffic. As an escape every now and then.” – Tokyo

41. “So when the chaos happens, I always think about when I was the happiest, so I’ll stay and live in those memories forever.” – Tokyo

42. “But eventually, there comes a time when you stop and all the pain washes over you, and you feel like there’s nothing you can do to make it disappear.” – Tokyo

43. “The good thing about relationships is that you finally forget how they started.” – Tokyo

45. “I knew I had to run faster than ever before, so the grief couldn’t catch me.” – Tokyo

46. “That’s nostalgia—finding out moments from the past, even if we didn’t realize it at the time were true happiness.” – Tokyo

48. “Death is simply just a word, a priori. It comprises everything that doesn’t exist. On the other hand, once you’re dead, you won’t remember you were alive.” – Berlin

49. “We’re the ones who are going to make art. This heist will be unforgettable.” – Berlin

51. “First times are so special. Unique. But the last times are beyond comparison. They are priceless. But people don’t normally know it’s their last time.” – Berlin

52. “My love, the things that actually matter in life always come unexpectedly.” – Berlin

53. “Because someday, something will go wrong. It could cost you your life or something worse. And on that day what you can’t be thinking is that you are to be blamed for something you couldn’t control. That’s life. Enjoy it, until the party is over.” – Berlin

54. “If you really want something in life, you have to steal it from someone else. That’s the story of the world, my son.” – Berlin

55. “Now you know that you’re really one of us. So, next time, you can leave all of that arrogance and moral superiority behind and never call me a cynic ever again.” – Berlin

57. “I never took you to play tennis, or to ride a bike uphill, or to go rowing someplace because doing that wouldn’t teach you something you already know.” – Berlin

58. “I have always wanted to have one mahogany desk, but crime and office don’t get along.” – Berlin

60. “Everything can go to hell in less than a second.” – Nairobi

62. “What you have to do is make those suckers see what you are capable of. Show them you are not scared.” – Nairobi

64. “Are you a complete idiot or what? You’ve heard of Stockholm Syndrome, right?” – Nairobi

67. “All the decisions we made in the past lead us inexorably into the future.” – Tokyo

70. “If you had to pick between your integrity and oxygen, what would you choose?” – Palermo

Did These Money Heist Quotes Reinforce Your Beliefs?

Our world is increasingly becoming more dangerous. Sometimes, it feels like people have lost all care for one another. Fortunately, Money Heist opens our eyes to the world’s evils and how to fight against them.

This phenomenal series speaks about the reality we face today and why we must resist. What the characters do is risky and may even lead to imprisonment or death. But, they continue to prove that the good of the people is worth fighting for and that the good of humanity is much more important than those in power.

Of course, heists are not the way to do it; but this is the method the show uses to help us understand that we have the right—and the ability—to fight back. We must never allow anyone to take advantage of our weaknesses and blind spots. We all deserve to live in a just and equal society, so we must continue to fight for a better world!

We hope this list of Money Heist quotes was able to help you understand the more profound lessons the show’s trying to impart. Feel free to reread this collection whenever you need a reminder, or if you just miss your favorite characters!

Which quote is your favorite? Are there other good Money Heist quotes you’d like us to add? Join the discussion below!