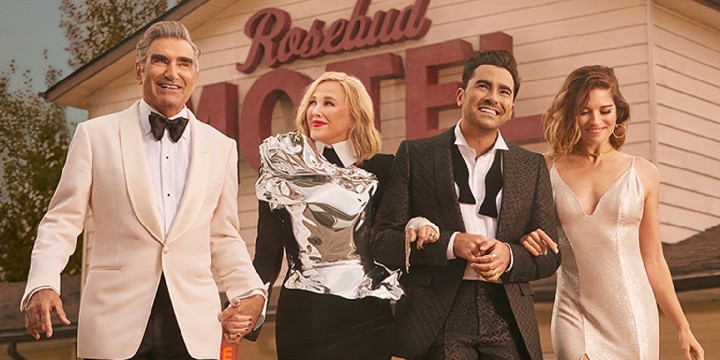 These top 50 Schitt’s Creek quotes will provide you with great lines from the series that’ll make you laugh out loud and get wisdom about life at the same time!

Schitt’s Creek was first released in 2015 and aired on Pop TV. There are a lot of avid fans now, but no one really picked up on how great the show was during that time. However, after a few seasons and when it was finally aired on Netflix, Schitt’s Creek slowly became a household name and a smash hit that earned millions of viewers worldwide!

Yes, Schitt’s Creek is full of comedy and humor. But, its impact on its viewers’ lives goes way beyond that. If you’re curious and want to know more about the show, dive into our collection below!

And make sure to check out these David Rose quotes and Moira Rose quotes.

1. “Gossip is the devil’s telephone. Best to just hang up.” – Moira Rose

2. “Talk to the hand, son. Because the ears are no longer working.” – Johnny Rose

4. “What you did was impulsive, capricious, and melodramatic. But, it was also wrong.” – Moira Rose

5. “Never let the bastards get you down!” – Moira Rose

6. “You must prepare for life, and whatever it will throw at you. The opportunities will diminish, and the ass will get bigger. Oh, you can bet your bottom dollar it will! Especially yours. You’re going to have a huge ass.” – Moira Rose

8. “I’m only doing this because you called me rude, and I take that as a compliment.” – Stevie Budd

9. “I have never heard someone say so many wrong things, one after the other, consecutively, in a row.” – David Rose

10. “I am suddenly overwhelmed with regret. It’s a new feeling for me, and I don’t find it at all pleasurable.” – Moira Rose

11. “I could not be more at one with nature. I do Coachella every year.” – David Rose

14. “Well, if I find out that you’re accusing me of doing something I didn’t do, then I’m going to accuse you of making false accusations.” – Roland Schitt

15. “I’ve been waiting for this moment. Apparently, if they call your number, you get to stand in front of a judge. I feel like I’m on The Voice!” – Jocelyn Schitt

16. “This place is almost charming. Very rustic cottage. I was half expecting an early Unabomber.” – Moira Rose

17. “I’ve been burned so many times I’m like the human equivalent of the inside of a roasted marshmallow.” – David Rose

19. “You know what, David? You get murdered first for once.” – Alexis Rose

24. “There’s nothing here but hot singles in my area.” – Moira Rose

25. “We’re drinking to me not becoming an alcoholic.” – Stevie Budd

Short Schitt’s Creek Quotes for You to Think About

30. “What kind of barnyard were you raised in?” – David Rose

Schitt’s Creek Quotes to Know More About the Characters

32. “I don’t want to be taken advantage of because I’m overdressed.” – Johnny Rose

34. “I’m sorry, but I know what looks correct. And this situation looks incorrect!” – David Rose

36. “In case you didn’t know, I’m wildly popular. Some might even venture to call me beloved.” – David Rose

38. “What now? Do I leave everything behind and move to some random island to be with the love of my life? Because I did that with Harry Styles in England and it was, like, too rainy.” – Alexis Rose

39. “I’ve spent most of my life not knowing what right was supposed to feel like, and then I met you. And everything changed. You make me feel right.” – Patrick Brewer

40. “You know, being approachable isn’t that important, anyway. The queen hasn’t smiled since the ’70s, and her birthdays are still very well attended.” – David Rose

41. “If airplane safety videos have taught me anything, David, it’s that a mother puts her own mask on first.” – Moira Rose

42. “Oh, look at David. Smart enough to get that joke, but not smart enough to stop wearing sweaters in the middle of summer.” – Johnny Rose

43. “I do drink red wine. But I also drink white wine. And I’ve been known to sample the occasional rosé. And a couple of summers back I tried a merlot, that used to be a chardonnay. I like the wine, and not the label.” – David Rose

44. “You’d think there’d be more of a market for oversized paintings of other people’s families.” – Stevie Budd

45. “I have lost all my skills. And now I know how it feels to be utterly helpless like you and your sister.” – Moira Rose

More Schitt’s Creek Quotes That You Will Love

47. “So this is weird. Today marks the longest relationship I’ve ever voluntarily had with someone. Yeah, the actual longest relationship was a three-month affair with a Saudi prince, but for the last two months of that I was trapped in his palace trying to get to an embassy.” – Alexis Rose

48. “Allow me to offer you some advice. Take a thousand naked pictures of yourself now. You may currently think, ‘Oh, I’m too spooky,’ or ‘Nobody wants to see these tiny boobies,’ but believe me—one day, you will look at those photos with much kinder eyes and say, ‘Dear God, I was a beautiful thing!’” – Moira Rose

49. “He loves everyone. Men, women, women who become men, men who become women. I’m his father, and I always wanted his life to be easy. But, you know, just pick one gender, and maybe, maybe everything would’ve been less confusing.” – Johnny Rose

50. “I miss being surrounded by loose acquaintances who think I’m funny and smart and charming.” – Alexis Rose

How Did Schitt’s Creek Impact the Way You View Life?

The whole plot revolves around the Rose family—a wealthy family that crumbled down to its core because of a tax scandal. Because they had nowhere and no one else to turn to, they went to Schitt’s Creek, their only remaining property, which was as fate would have it, only purchased as a joke.

Throughout the show, we’ve witnessed different events in the characters’ lives, and from that, it’s clear that everything can change in the blink of an eye. Therefore, we shouldn’t judge something or someone solely based on our first impressions. We should always keep an open mind and know that things can change for the better—or for the worse.

Remember that what would genuinely hold your life together is love and family. With them, we can achieve greater things; and with love in everything we do, happiness is within our fingertips. After all, what is life without joy?

We hope these quotes were able to help you see what Schitt’s Creek is truly about. Remember that we all go through different seasons in life, and it is through the support of our loved ones that we can rise above each challenge.

What did you learn from this collection? Are there any other Schitt’s Creek quotes you’d like us to add? Comment down below!