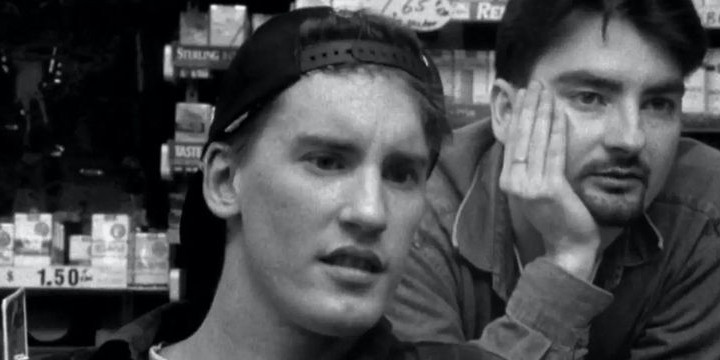 We’ve gathered the top 30 Clerks quotes that will teach you about work, relationships, and life.

Clerks is a comedy buddy movie released in 1994. It tells the story of the life of two store clerks, Dante Hicks and Randal Graves, working a full day job.

Although it may sound boring and mundane, its quirky characters and clever writing made it an enjoyable show full of lessons.

Let us follow the characters’ small adventures as they discover more about love, jobs, and life.

Check out our full collection below to learn more.

And don’t miss out these Step Brothers quotes and Fast Times at Ridgemont High quotes.

1. “I like to think that I am a master of my own destiny.” – Randal Graves

2. “I hope it feels so good to be right. There’s nothing more exhilarating than pointing out the shortcomings of others, is there?” – Randal Graves

3. “It’s important to have a job that makes a difference, boys.” – Caged Animal Masturbator

4. “I mean, that’s what high school was about: algebra, bad lunch, and infidelity.” – Dante Hicks

5. “I find it’s best to stay out of other people’s affairs.” – Randal Graves

6. “I’m a firm believer in the philosophy of a ruling class, especially since I rule.” – Randal Graves

8. “Well, if your job was as meaningless as theirs, wouldn’t you go crazy?” – Caged Animal Masturbator

10. “If title dictated my behavior, as a clerk serving the public, I wouldn’t be allowed to spit water at that guy. But I did. So, my point is that people dictate their own behavior. Even though I work in a video store, I choose to go rent movies at Big Choice. Agreed?” – Randal Graves

Clerks Quotes to Learn About the Harsh Realities of Life

11. “You know, there’s a million fine-looking women in the world, dude. But they don’t all bring you lasagna at work. Most of ’em just cheat on you.” – Silent Bob

12. Randal Graves: “What’s with you, man? You haven’t said anything for like 20 minutes. What the hell’s your problem?”

13. “You like to think the weight of the world rests on your shoulders like this place would fall apart if Dante wasn’t here. Jesus, you overcompensate for having what’s basically a monkey’s job. You push f*cking buttons. Anybody can waltz in here and do our jobs. You’re so obsessed with making it seem so much more epic, so much more important than it really is. Christ, you work in a convenience store, Dante! And badly, I might add!” – Randal Graves

14. “Oh, f*ck you! F*ck you, pal! Jesus, there you go again, trying to pass the buck. I’m the source of all your misery. Who closed the store to play hockey? Who closed the store to go to a wake? Who tried to win back his ex-girlfriend without even discussing how he felt with his present one? You want to blame somebody? Blame yourself.” – Randal Graves

15. “All those innocent contractors hired to do a job were killed, casualties of a war they had nothing to do with.” – Randal Graves

16. “Two reasons: one, I hate it when people can’t shut up about the stupid tabloid headlines, and two, to prove a point, title does not dictate behavior.” – Randal Graves

17. “Do you have that one with that guy who was in that movie that was out last year?” – Low I.Q. Video Customer

18. “You know what the real tragedy is? I’m not even supposed to be here today!” – Dante Hicks

19. “Everybody who comes in here is way too uptight. This job would be great if it wasn’t for the f*cking customers.” – Randal Graves

20. Dante Hicks: “I’m stuck in this pit, working for less than slave wages. Working on my day off, the godd*mn steel shutters are closed, I deal with every backward *ss f*ck on the planet. I smell like shoe polish. My ex-girlfriend is catatonic after f*cking a dead guy. And my present girlfriend has sucked 36 dicks.”

21. “We like to make ourselves seem so much more important than the people that come in here to buy a paper, or God forbid, cigarettes. We look down on them as if we’re so advanced. Well, if we’re so f*cking advanced, what are we doing working here?” – Randal Graves

Clerks Quotes to Make You Laugh

22. “Hey, Caitlin, break his heart again this time, and I’ll kill you. Nothing personal.” – Randal Graves

25. “My love for you is ticking clock, berserker. Would you like to suck my dick, berserker.” – Olaf the Russian Metalhead

27. “Yeah. Silent Bob, you’re a rude motherf*cker, you know that? But you’re cute as hell. I could go down on you, suck you, line up three other guys, make like a circus seal. Ewww, you f*cking f*ggot, I hate guys. I love women!” – Jay

Randal Graves: “He broke his neck.”

Randal Graves: “He broke his neck trying to suck his own dick!”

Did These Clerks Quotes Make You Realize That You Are the One in Charge of Your Own Life?

The highest-grossing movies typically tell the stories of incredible and successful people. With director Kevin Smith’s work, we got the chance to peek inside the daily lives of our underpaid and overworked clerks. The movie proves that there is a lot to learn even from the most ordinary person working a tedious, full-time job.

Watching Clerks may seem like a snooze fest, but it teaches an important message everyone should talk about—being in charge of your own life. It opens the discussion of how we create our own hell, and it is our choice if we live inside it forever.

In the movie, we can see how Dante Hicks was continuously called out by his peers that his sufferings are rooted in his decisions. With that, the movie was able to show an inspirational story of starting to take control of your own life. Moreover, it reminds us to accept the consequences of our sins and to strive to be better in life.

We hope that these Clerks quotes were able to teach you a thing or two about life’s harsh realities. Keep working on yourself, and remember that you decide your own fate!

Which Clerks quote is your favorite? Did you realize things about life while reading these quotes? Share your thoughts with us in the section below!