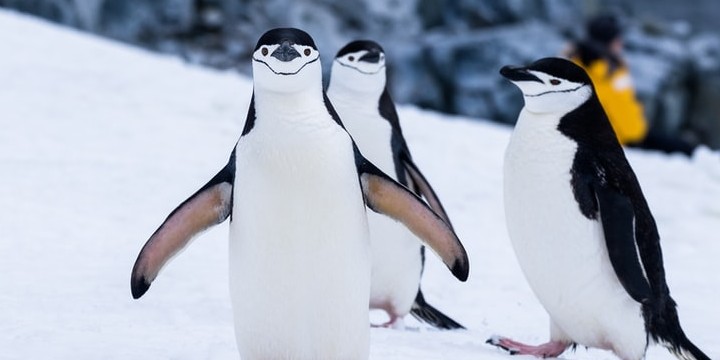 These top 60 penguin quotes will show you exactly why they are considered to be symbols of loyalty, devotion, and adaptability.

So, if you want to know more about these cute and cuddly birds, then be sure you check out the full list below.

Penguins are great believers of sticking together through thick and thin, and through endless winter nights.

You’d often see them in big groups—with their family, and of course, with their soulmates.

Learn more about them here.

And make sure to read these bird quotes and flamingo quotes.

1. “Once a penguin finds its perfect other penguin, they stay together pretty much forever.” – Anna Staniszewski

2. “It’s practically impossible to look at a penguin and feel angry.” – Joe Moore

3. “The answer to every problem involved penguins.” – Rick Riordan

4. “I suggest we depict penguins as callous and unfeeling creatures who insist on bringing up their children in what is little more than a large chest freezer.” – Jasper Fforde

6. “Antarctica. You know, that giant continent at the bottom of the earth that’s ruled by penguins and seals.” – C.B. Cook

7. “Penguins are an indicator of the health of our watery planet, and if they are unable to survive, we had better take notice or we might find our own survival threatened.” – Roger Tory Peterson

8. “The penguins that spent most of their time fighting were the ones with no chicks. It’s like they’re supposed to be taking care of their chicks. But because they don’t have any, they have nothing to do with all their energy. So they just pick fights.” – Maria Semple

9. “Our babies are like penguins; penguin babies can’t exist unless more than one person is taking care of them. They just can’t keep going.” – Alison Gopnik

10. “A penguin cannot be a giraffe, so just be the best penguin you can be.” – Gary Vaynerchuk

11. “No matter what I do with my life, or how successful I am, I will always be a socially awkward penguin inside.” – Wil Wheaton

13. “Take it all in all. I do not believe anybody on earth has a worse time than an Emperor penguin.” – Apsley Cherry-Garrard

14. “If ever the difficulties of your life seem overwhelming, consider the prospect of being eaten alive by savage penguins and rejoice that such horrors are unknown to you.” – A.L. Kennedy

15. “They said you are a bird, and birds should soar high. So I spread my wings, and decided to touch the sky. Foolish me, for I am a penguin, and penguins can never fly.” – Shon Mehta

17. “Our wings serve as flippers that carry us across the ocean; not in the sky! Why, us penguins have so much fun time in the water, we don’t even want to fly!” – Jasmin Martin

18. “Why had this penguin come to mean so much? That, at least, is easy to explain. Anybody who suddenly moves far from family and friends and the pets they love, feels a vulnerable emptiness.” – Tom Mitchell

19. “What’s the two things they tell you are healthiest to eat? Chicken and fish. You know what you should do? Combine them, eat a penguin.” – Dave Attel

Penguin Quotes on Love and Finding Your Soulmate

20. “Penguins mate for life. Which doesn’t really surprise me that much, because they all look exactly alike. It’s not like they’re gonna meet a better looking penguin one day.” – Ellen DeGeneres

21. “Male penguins are unfaithful up to an advanced age—a phenomenon sometimes attributed to the sea air.” – Will Cuppy

22. “These penguins call us to a deeper resolve and commitment to do what we can on their behalf. If we cannot save penguins—cannot save what everybody loves—what can we save?” – Charles Bergman

23. “I want to be your personal penguin. Please?” – Sandra Boynton

24. “You can’t not be happy around penguins. You’re unfortunately happy and cold but the happiness makes up for the coldness.” – Carla Gugino

26. “I’ll always defend the people I love even though I’m as terrifying as a baby penguin.” – Niall Horan

27. “Penguins are the really ideal example of monogamy.” – Rich Lowry

28. “Because penguins are so beloved, they are uniquely capable of teaching us about love for the natural world.” – Charles Bergman

Penguin Quotes on Nature and the Environment

30. “Penguins are living lessons in caring for the earth and its creatures, in all their beauty and vulnerability.” – Charles Bergman

31. “And they will march just as they have done for centuries, ever since the emperor penguin decided to stay, to live and love in the harshest place on Earth.” – Luc Jacquet

32. “The literature of the emperor penguin is as forbidding, as inaccessible, as the frozen heart of Antarctica itself. Its beauties may be unearthly, but they are not for us.” – Ursula K. Le Guin

33. “I think penguins are the most human of all the birds, which may be why people love them. They’re cute, they stand upright, and they look like they’re wearing tuxedos.” – Shia LaBeouf

34. “Like all the fat orange penguins, it gets fatter with reading, which it should, because in a way the more you read it the bigger your own experience of the world gets, the fatter your soul.” – Niall Williams

35. “Go farther and get closer. Listen. Animals are talking to us. They are calling us. We have only to learn to listen.” – Charles Bergman

36. “Don’t believe what you hear about those penguins. A species of lazy waddlers. Their extinction is imminent.” – Benson Bruno

37. “Imagine penguins and sea leopards outlasting the whole works. Well, probably they deserve to. Especially penguins. I don’t think they ever hurt anybody.” – William Brinkley

38. “For a taste that’s a bit more distinct, eat a bird before it’s extinct.” – Jasper Fforde

39. “Now I know how to make it as a pedophile. Forget lollipops. Antarctic wildlife is the ticket.” – Jacob M. Appel

41. “She smiled with the warmth of a penguin.” – Kim Harrison

42. “I saw the whole thing! A dog and a penguin helped him escape!” – Edgar Cantero

43. “Penguins are one of the best antidotes for despair that I know.” – Charles Bergman

44. “How could there be penguins if nothing existed yet?” – David S. Atkinson

46. “My name is Jimmy, but my friends just call me the hideous penguin boy.” – Tim Burton

50. “If I ever have any back-up dancers, I want the penguins from Madagascar.” – Ed Sheeran

51. “Mr. Popper had read that penguins are extremely curious, and he soon found that this was true, for stepping out, the visitor began to inspect the house. Down the hall it went, and into the bedrooms, with its strange, pompous little strut.” – Richard and Florence Atwater

52. “I’m fortunate to know a lot of incredibly talented people, and they all want to be a penguin.” – Bob Saget

53. “You can draw a penguin on a toilet reading The New York Times and it’s adorable, but try doing it with an adult male character, and it’s disgusting.” – Bill Watterson

54. “If you think penguins are fat and waddle, you have never been attacked by one running at you in excess of 100 miles per hour.” – Linus Torvalds

56. “You should not take prayer too seriously. There is something playful about God. You only have to look at a penguin to realize that He likes to play little jokes on creatures.” – Thomas Keating

57. “I know what nuns are, kind of. It’s just I never saw one. I didn’t know they looked like penguins.” – Lesley Howrath

59. “There have been better attempts at marching, and they have been made by penguins.” – Terry Pratchett

60. “All penguins are the same below the surface, which I think is as perfect an analogy as we’re likely to get for the futility of racism.” – Russell Brand

Did These Penguin Quotes Inspire You to Stick With the Ones You Love? What Did You Learn About Adaptation and Resilience?

Penguins are some of the cutest and most cuddly birds on the planet. However, it’s really hard to find one close to you since they live in the coldest places on earth. The closest one you’d probably find are the ones in zoos. But aside from being their lovely selves, penguins give us insight into much more.

They teach us about love and devotion, and they teach us about the importance of being able to adapt and having the resilience to overcome anything. The fact of the matter is that they live in harsh weather surrounded by many predators.

But still, they continue to live amidst the harsh conditions of life. Like penguins, let’s learn to fight through the storms in our life and learn to adopt their ‘never give up’ attitude.

Which penguin quotes made the most impact on you? Do you also find them adorable? What else did you learn about penguins and their characteristics? Let’s talk about your thoughts in the comments section below.