2. “Success is no accident. It is hard work, perseverance, learning, studying, sacrifice and most of all, love of what you are doing or learning to do.” – Pele

3. “Perseverance is failing 19 times and succeeding the 20th.” – Julie Andrews

4. “Nothing in this world can take the place of persistence. Talent will not; nothing is more common than unsuccessful people with talent. Genius will not; unrewarded genius is almost a proverb. Education will not; the world is full of educated derelicts. Persistence and determination alone are omnipotent. The slogan “press on” has solved and always will solve the problems of the human race.” – Calvin Coolidge

5. “Through hard work, perseverance and a faith in God, you can live your dreams.” – Ben Carson

7. “Just remember, you can do anything you set your mind to, but it takes action, perseverance, and facing your fears.” – Gillian Anderson

8. “The will to persevere is often the difference between failure and success.” – David Sarnoff

10. “Persist and persevere, and you will find most things that are attainable, possible.” – Lord Chesterfield

11. “The most essential factor is persistence – the determination never to allow your energy or enthusiasm to be dampened by the discouragement that must inevitably come.” – James Whitcomb Riley 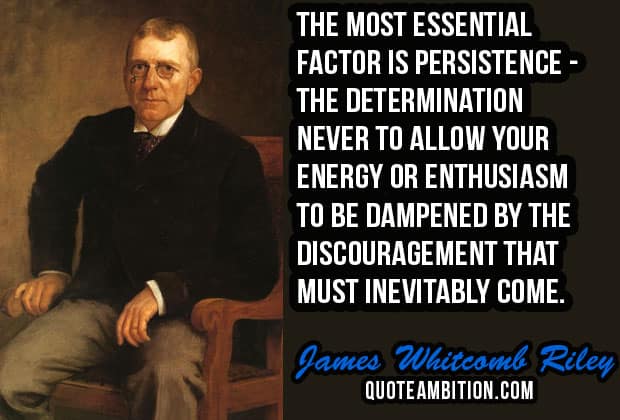 12. “A little more persistence, a little more effort, and what seemed hopeless failure may turn to glorious success.” – Elbert Hubbard

13. “Decide carefully, exactly what you want in life, then work like mad to make sure you get it!” – Hector Crawford

14. “Success seems to be connected with action. Successful men keep moving. They make mistakes, but they don’t quit.” – Conrad Hilton

15. “Through perseverance many people win success out of what seemed destined to be certain failure.” – Benjamin Disraeli

16. “No one succeeds without effort… Those who succeed owe their success to perseverance.” – Ramana Maharshi

17. “Perseverance is not a long race; it is many short races one after another.” – Walter Elliott

18. “In the realm of ideas everything depends on enthusiasm… in the real world all rests on perseverance.” – Johann Wolfgang von Goethe

19. “In the confrontation between the stream and the rock, the stream always wins – not through strength but by perseverance.” – H. Jackson Brown

20. “We truly believe with hard work, dedication and perseverance, we can become the best at what we do. No one wants to become mediocre.” – Andy Biersack

21. “We can do anything we want to do if we stick to it long enough.” – Helen Keller 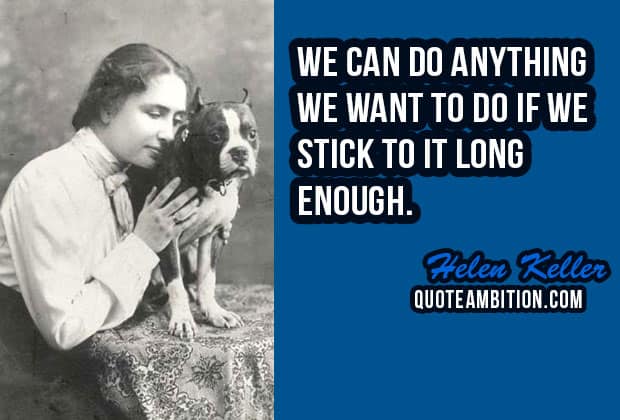 25. “Our greatest weakness lies in giving up. The most certain way to succeed is always to try just one more time.” – Thomas Edison

26. “You aren’t going to find anybody that’s going to be successful without making a sacrifice and without perseverance.” – Lou Holtz

27. “The three ordinary things that we often don’t pay enough attention to, but which I believe are the drivers of all success, are hard work, perseverance, and basic honesty.” – Azim Premji

28. “It is not enough to begin; continuance is necessary. Mere enrollment will not make one a scholar; the pupil must continue in the school through the long course, until he masters every branch. Success depends upon staying power. The reason for failure in most cases is lack of perseverance.”

30. “Never stop fighting until you arrive at your destined place – that is, the unique you. Have an aim in life, continuously acquire knowledge, work hard, and have perseverance to realise the great life.” – A. P. J. Abdul Kalam

31. “Champions keep playing until they get it right.” – Billie Jean King 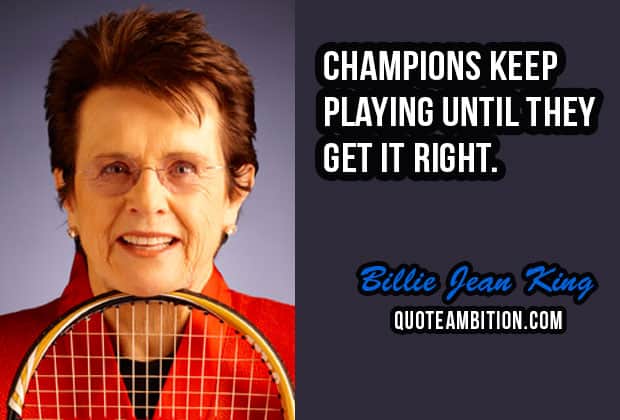 32. “If I had to select one quality, one personal characteristic that I regard as being most highly correlated with success, whatever the field, I would pick the trait of persistence. Determination. The will to endure to the end, to get knocked down seventy times and get up off the floor saying. “Here comes number seventy-one!” – Richard M. Devos

33. “Failure after long perseverance is much grander than never to have a striving good enough to be called a failure.” – George Eliot

34. “Perseverance is a positive, active characteristic. It is not idly, passively waiting and hoping for some good thing to happen. It gives us hope by helping us realize that the righteous suffer no failure except in giving up and no longer trying. We must never give up, regardless of temptations, frustrations, disappointments, or discouragements.” – Joseph P. Wirthlin

36. “Adversity, and perseverance and all these things can shape you. They can give you a value and a self-esteem that is priceless.” – Scott Hamilton

37. “I have always been one to encourage perseverance.” – Christina Aguilera

38. “If one dream should fall and break into a thousand pieces, never be afraid to pick one of those pieces up and begin again.” – Flavia Weedn

39. “If your determination is fixed, I do not counsel you to despair. Few things are impossible to diligence and skill. Great works are performed not by strength, but perseverance.” – Samuel Johnson

40. “My three Ps: passion, patience, perseverance. You have to do this if you’ve got to be a filmmaker.” – Robert Wise

41. “Perseverance is a great element of success. If you only knock long enough and loud enough at the gate, you are sure to wake up somebody.” – Henry Wadsworth Longfellow 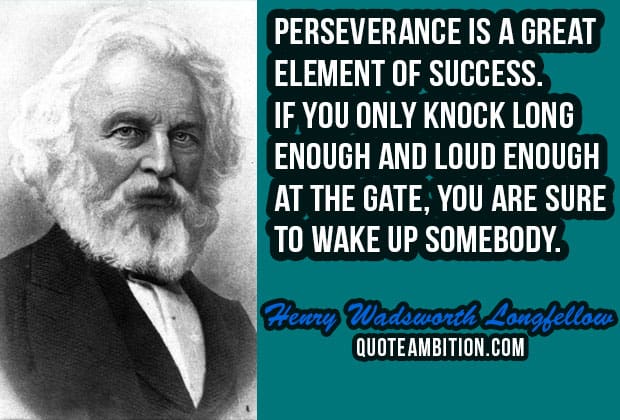 42. “Success seems to be largely a matter of hanging on after others have let go.” – William Feather

43. “We are looking for a set of personal characteristics that predict success, the first and foremost of which is perseverance in the face of challenges.” – Wendy Kopp

44. “By perseverance the snail reached the ark.” – Charles Spurgeon

45. “Permanence, perseverance and persistence in spite of all obstacles, discouragements, and impossibilities: It is this, that in all things distinguishes the strong soul from the weak.” – Thomas Carlyle

46. “Life is not easy for any of us. But what of that? We must have perseverance and above all confidence in ourselves. We must believe that we are gifted for something and that this thing must be attained.” – Marie Curie

48. “Great works are performed not by strength but by perseverance.” – Samuel Johnson

49. “If four things are followed – having a great aim, acquiring knowledge, hard work, and perseverance – then anything can be achieved.” – A. P. J. Abdul Kalam

50. “Patience and perseverance have a magical effect before which difficulties disappear and obstacles vanish.” – John Quincy Adams

51. “Success is the child of drudgery and perseverance. It cannot be coaxed or bribed; pay the price and it is yours.” – Orison Swett Marden 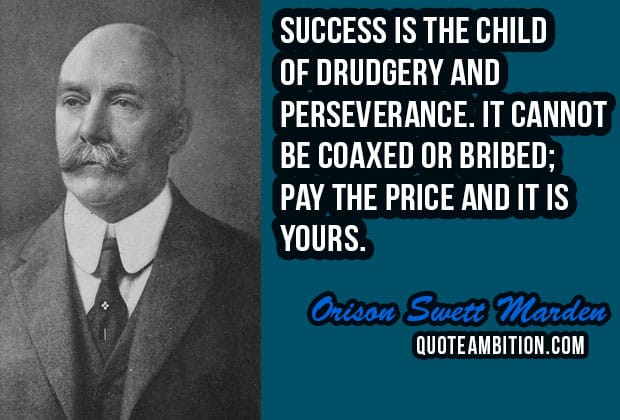 52. “Perseverance is an active principle, and cannot continue to operate but under the influence of desire.” – William Godwin

54. “The difference between perseverance and obstinacy is that one comes from a strong will, and the other from a strong won’t.” – Henry Ward Beecher

55. “Permanence, perseverance and persistence in spite of all obstacles, discouragements and impossibilities: It is this, that in all things distinguishes the strong soul from the weak.” – Thomas Carlyle

56. “Most people never run far enough on their first wind to find out they’ve got a second.”

57. “There is no telling how many miles you will have to run while chasing a dream.”

58. “If you wish to succeed in life, make perseverance your bosom friend, experience your wise counselor, caution your elder brother, and hope your guardian genius.” – Joseph Addison

60. “Grit is that ‘extra something’ that separates the most successful people from the rest. It’s the passion, perseverance, and stamina that we must channel in order to stick with our dreams until they become a reality.” – Travis Bradberry

61. “The road to perseverance lies by doubt.” – Francis Quarles 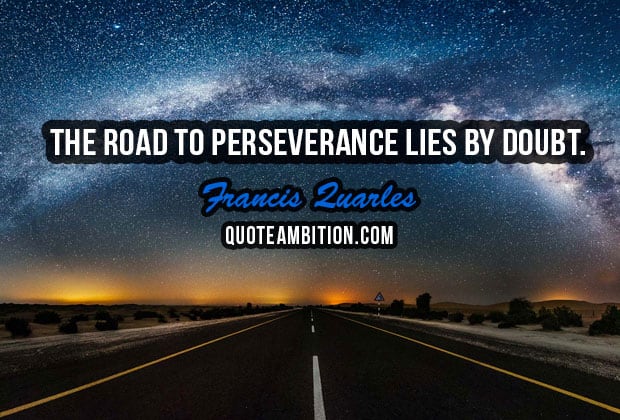 62. “The path from dreams to success does exist. May you have the vision to find it, the courage to get on to it, and the perseverance to follow it.” – Kalpana Chawla

63. “Courage and perseverance have a magical talisman, before which difficulties disappear and obstacles vanish into air.” – John Quincy Adams

64. “Perseverance is a virtue that cannot be understated.” – Bob Riley

66. “There are only two mistakes one can make along the road to truth; not going all the way, and not starting.” – Buddha

67. “To succeed, you must have tremendous perseverance, tremendous will. “I will drink the ocean,” says the persevering soul; “at my will mountains will crumble up.” Have that sort of energy, that sort of will; work hard, and you will reach the goal.” – Swami Vivekananda

68. “From my dad I learned to be good to people, to always be honest and straightforward. I learned hard work and perseverance.” – Luke Bryan

69. “There are two ways of attaining an important end, force and perseverance; the silent power of the latter grows irresistible with time.” – Sophie Swetchine

70. “I’ve always made a total effort, even when the odds seemed entirely against me. I never quit trying; I never felt that I didn’t have a chance to win.” – Arnold Palmer

71. “I think one of the most important attributes is perseverance.” – David Rose 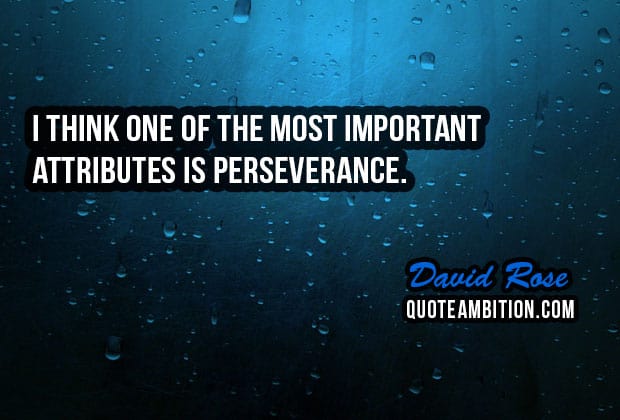 72. “We look for people who demonstrate perseverance in the face of challenges, the ability to influence and motivate others – people who want to work relentlessly to ensure that kids who are facing the challenges of poverty have an excellent education.” – Wendy Kopp

73. “Everything that I’ve ever been able to accomplish in skating and in life has come out of adversity and perseverance.” – Scott Hamilton

74. “My personal story has always been about perseverance and always getting up when I fall. Maybe I’m not Olympic champion, but I can teach the world about that.” – Jeremy Abbott

75. “Perseverance has always just been something that was in me. And it was a tool that came in very handy as a ballerina.” – Misty Copeland

76. “Nothing in the world can take the place of persistence. Talent will not; nothing is more common than unsuccessful men with talent. Genius will not; unrewarded genius is almost a proverb. Education will not; the world is full of educated derelicts. Persistence and determination alone are omnipotent. The slogan Press On! has solved and always will solve the problems of the human race.” – Calvin Coolidge

77. “A failure is not always a mistake. It may simply be the best one can do under the circumstances. The real mistake is to stop trying.” – B. F. Skinner

78. “Let me tell you the secret that has led to my goal. My strength lies solely in my tenacity.” – Louis Pasteur

80. “I will persist until I succeed. Always will I take another step. If that is of no avail I will take another, and yet another. In truth, one step at a time is not too difficult. I know that small attempts, repeated, will complete any undertaking.” – Og Mandino 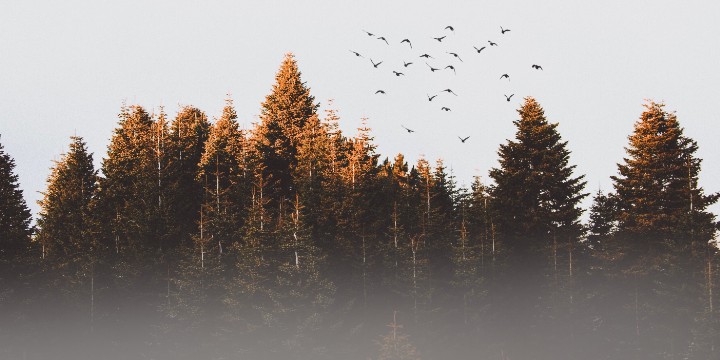 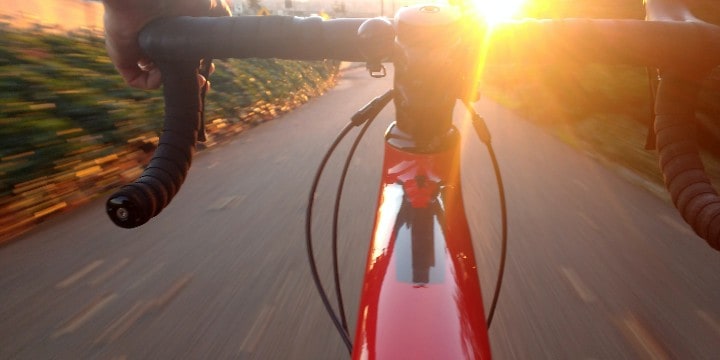 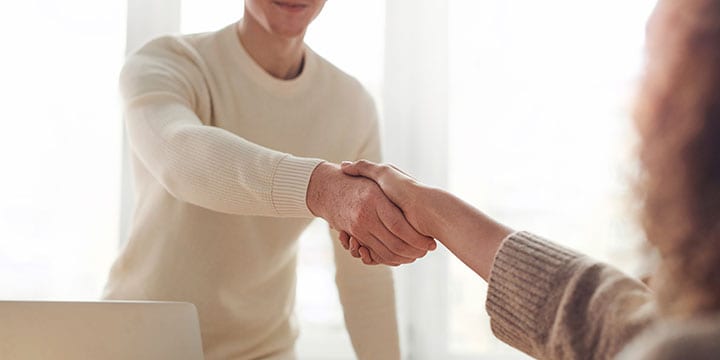 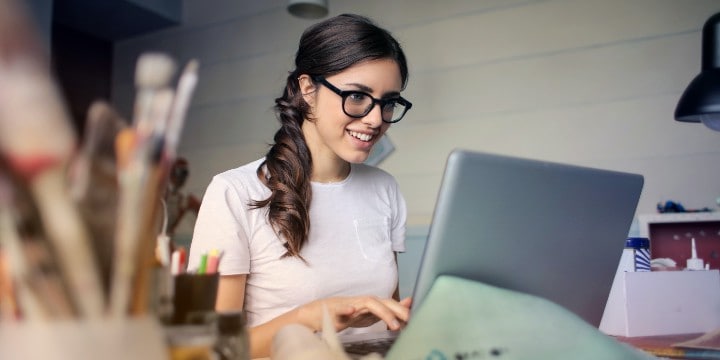 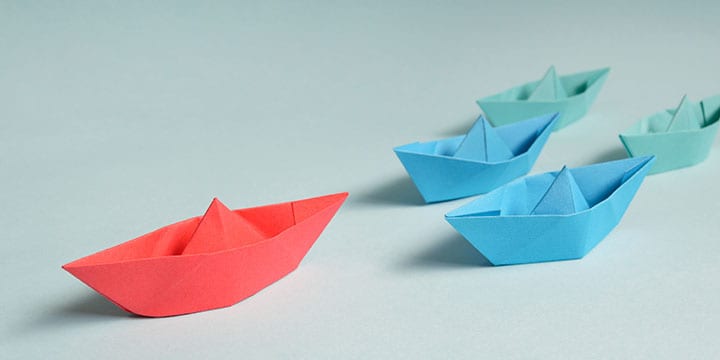 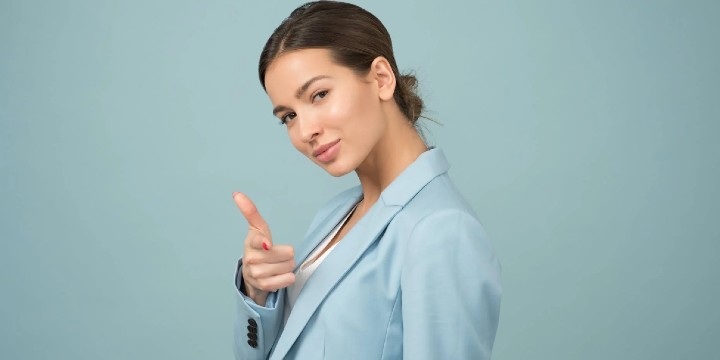