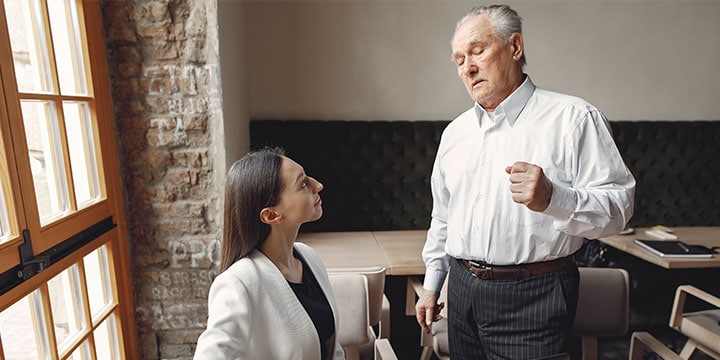 If you want someone to take you seriously or give you the credit you deserve, these respect quotes are perfect for you!

Everyone, regardless of age, gender, or social status, deserves respect.

But, it doesn’t come instantly; you must always be discerning and careful of who you give it to.

At the same time, you must also work hard to show that you’re someone deserving of others’ respect.

Proper giving and receiving of respect can change your life in a significant way.

So, if you need advice on how to act and properly show someone your respect, then make sure you read through our whole collection!

And don’t miss out these happiness quotes and positive quotes.

1. “Respecting someone indicates the quality of your personality.” – Mohammad Rishad Sakhi

2. “I must respect the opinions of others even if I disagree with them.” – Herbert H. Lehman

3. “Respect comes in two unchangeable steps: giving it and receiving it.” – Edmond Mbiaka

4. “Respect was invented to cover the empty place where love should be.” – Leo Tolstoy

5. “Without feelings of respect, what is there to distinguish men from beasts?” – Confucius

6. “The wise make the world beautiful by respecting others.” – Maxime Lagacé

7. “The secret of a happy life is respect. Respect for yourself and respect for others.” – Ayad Akhtar

11. “Respect is more than just caring for another, it’s caring for humanity.” – Maxime Lagacé

12. “Every human being, of whatever origin, of whatever station, deserves respect. We must each respect others even as we respect ourselves.” – Ralph Waldo Emerson

13. “Respect has nothing to do with who is right and who is wrong. It has to do with allowing space for someone else’s opinion.” – Jackie Viramontez

14. “I speak to everyone in the same way, whether he is the garbage man or the president of the university.” – Albert Einstein

15. “Respect is one of the most important things you can teach a child.” – Catherine Pulsifer

16. “Treat everyone with respect and kindness. Period. No exceptions.” – Kiana Tom

17. “Respecting others’ opinions doesn’t mean being untrue to our own.” – P. M. Forni

18. “Respect is the appreciation of the separateness of the other person, of the ways in which he or she is unique.” – Annie Gottlieb

19. “One of the most sincere forms of respect is actually listening to what another has to say.” – Bryant H. McGill

20. “I’m not concerned with your liking or disliking me. All I ask is that you respect me as a human being.” – Jackie Robinson

21. “We don’t need to share the same opinions as others, but we need to be respectful.” – Taylor Swift

22. “When we show our respect for other living things, they respond with respect for us.” – Arapaho Proverb

23. “What women want is what men want. They want respect.” – Marilyn Vos Savant

Respect Quotes to Motivate You to Live a Better Life

24. “If you have some respect for people as they are, you can be more effective in helping them to become better than they are.” – John W. Gardner

26. “You should respect each other and refrain from disputes; you should not, like water and oil, repel each other, but should, like milk and water, mingle together.” – Buddha

27. “Everyone in society should be a role model, not only for their own self-respect but for respect from others.” – Barry Bonds

28. “You should show some respect for what other people see and feel, even though it is the exact opposite of what you see and feel.” – Luigi Pirandello

29. “Respect your fellow human being, treat them fairly, disagree with them honestly, enjoy their friendship, explore your thoughts about one another candidly, work together for a common goal and help one another achieve it.” – Bill Bradley

Deep Respect Quotes That Will Make Others Take You Seriously

30. “Men are respectable only as they respect.” – Ralph Waldo Emerson

31. “You can demand courtesy but you have to earn respect.” – Lawrence Goldstone

32. “There is no respect for others without humility in one’s self.” – Henri Frederic Amiel

34. “Respect begins with this attitude: I acknowledge that you are a creature of extreme worth.” – Gary Chapman

35. “Respect other people regardless of the level they are at, or the level you are at. When you hand out respect, you get it back.” – Erik Estrada

36. “Respect for the fragility and importance of an individual life is still the mark of an educated man.” – Norman Cousins

37. “This is how you start to get respect, by offering something that you have.” – Mitch Albom

38. “When you are content to be simply yourself and don’t compare or compete, everybody will respect you.” – Lao Tzu

40. “My approach is that you have to earn the respect of people you work with.” – Mark Pincus

Meaningful Respect Quotes for You to Understand Its Essence

43. “Being brilliant is no great feat if you respect nothing.” – Johann Wolfgang von Goethe

44. “I firmly believe that respect is a lot more important, and a lot greater, than popularity.” – Julius Erving

45. “Only those who respect the personality of others can be of real use to them.” – Albert Schweitzer

46. “ Respect other people’s feelings. It might mean nothing to you, but it could mean everything to them.” – Roy T. Bennett

47. “The final test of a gentleman is his respect for those who can be of no possible service to him.” – William Lyon Phelps

48. “Be kind, don’t judge, and have respect for others. If we can all do this, the world would be a better place. The point is to teach this to the next generation.” – Jasmine Guinness

49. “Respect is one of life’s greatest treasures. I mean, what does it all add up to if you don’t have that?” – Marilyn Monroe

50. “Respect requires empathy, the capacity to anticipate and understand the feelings of others. It requires consideration.” – Deborah Norville

51. “When you show people kindness and respect, despite petty differences, you are bringing positive vibes into your life and into the lives of others.” – Jason Scotts

52. “When we respect someone, we are acknowledging and appreciating their role in society or in our life.” – Jennifer Freed

Respect Quotes to Help You Keep the Love Alive

53. “Respect is one of the greatest expressions of love.” – Miguel Angel Ruiz

56. “If we lose love and self-respect for each other, this is how we finally die.” – Maya Angelou

57. “If you truly want to be respected by people you love, you must prove to them that you can survive without them.” – Michael Bassey Johnson

58. “I cannot compromise my respect for your love. You can keep your love, I will keep my respect.” – Amit Kalantri

Short Respect Quotes for Everyone Who Needs Advice

60. “Respect should be the first thing you give.” – Anonymous

61. “Be modest, be respectful of others, try to understand.” – Lakhdar Brahimi

Respect Quotes to Determine When Enough Is Enough

62. “Everyone should be respected as an individual, but no one idolized.” – Albert Einstein

63. “A human being is not to be handled as a tool but is to be respected and revered.” – Felix Adler

64. “Never respect men merely for their riches, but rather for their philanthropy; we do not value the sun for its height, but for its use.” – Gamaliel Bailey

More Respect Quotes to Help You Earn It

65. “Respect commands itself and it can neither be given nor withheld when it is due.” – Eldridge Cleaver

66. “We must have respect for both plumbers and our philosophers, or neither our pipes nor our theories will hold water.” – John W. Gardner

67. “Nothing is more despicable than respect based on fear.” – Albert Camus

68. “A child who is allowed to be disrespectful to his parents will not have true respect for anyone.” – Billy Graham

70. “I have more respect for a man who lets me know where he stands, even if he’s wrong than the one who comes up like an angel and is nothing but a devil.” – Malcolm X

How Did These Quotes Change Your Perception of Respect?

Respect can be shown in many different ways. It doesn’t have to come with big gestures. Also, it doesn’t mean that you should change your practices or opinions because you respect someone.

Sometimes, just listening and believing that they have the right to have their own views is enough. Being humane, compassionate, and open-minded are definitely signs of respect as well.

Respect for others leads to positive relationships and rapport. Remember that treating others with the same courtesy you expect them to show you will encourage them to take you seriously. But, before they give you the respect you deserve, you must first prove that you are worth it.

The quotes we’ve gathered in this collection showcase how respect works, both as a giver and receiver. So, remember to share these quotes with others to help them recognize their value and gain the respect they deserve.

Which of these respect quotes piqued your interest? Please, join the discussion below.