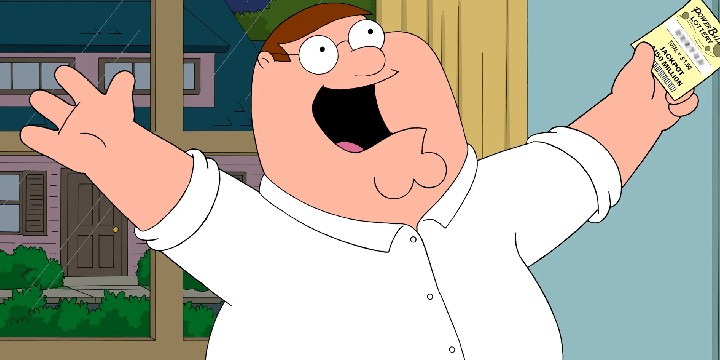 Check out these Peter Griffin quotes that will remind you why he is the greatest and funniest character in Family Guy.

Peter Griffin is one of the main characters of Family Guy and the patriarch of the Griffin family. His character is a clumsy, imperfect, ignorant, but good-hearted man. Watching him in the sitcom is enjoyable since his obvious flaws are used as jump-off points for his hilarious lines.

In a way, his mistakes and losses in life make us feel how human he is and remind us that he is not just a cartoon. As the show progresses, Peter inevitably leaves a mark in our hearts. Revisit his funniest lines and dumbest remarks by reading our collection below.

And don’t forget to check out these Family Guy quotes and Stewie Griffin quotes.

2. “I guess we’ve learned that no matter who you are or where you come from, life is a terrible thing.”

3. “When I set my mind to something, anything’s possible.”

4. “I have an idea so smart that my head would explode if I even began to know what I was talking about.”

6. “This is what you call life. Therefore go and enjoy yourself. What is correct for you might not be correct for others. You take both bad as well as good, and there, my opening assertion comes true. Ubu, sit down, good pooch.”

7. “Whatever kills me makes me stronger.”

8. “I’m not the smartest man in the world, but I can always look back on my life and say I went for it.”

10. “I got drunk and then got my picture taken. So that way, when I get pulled over for drunk driving, I look the same as on my license.”

11. “Well, you guys, we did it. We finally went to a restaurant without somebody yelling at us and the rest of the place applauding them.”

12. “You better watch who you’re calling a child, Louis. If I’m a child, you know what that makes you? A pedophile. And I’ll be damned if I’m going to stand here and be lectured by a pervert.”

13. “What? Gosh, it’s not like the internet to go crazy about something small and stupid.”

15. “I think the lesson here is, it doesn’t really matter where you’re from, as long as we’re all the same religion.”

Short Peter Griffin Quotes That Will Make You Laugh Out Loud

17. “There are gaps in my knowledge. This is hardly news.”

18. “Sitting here all sober is more boring than watching a pot boil.”

19. “What if God is a serial killer? He lowers the average lifespan of humans to 65.”

20. “The only way to settle a family dispute is in the cage.”

22. “I swear to God I thought dogs could breathe underwater.”

29. ” At least they don’t put their feminine ointments next to the mustard, Lois. That was the worst hot dog I ever ate.”

30. “Why do women have b**bs? So you can have something to look at when you’re talking to them.”

31. “Lois might be worth a million dollars to you, but to me, she’s worthless.”

32. “Jeez, Lois. I spent all morning on a boat drinking beer, telling jokes, and screwing around. How about a little me-time?”

33. “When you die, you go to a wonderful place called heaven. Nah, I’m just jackin’ you, you’ll all rot in the ground.”

34. “Oh, I will find one. I mean, you are looking at the guy who found the fountain of youth. It is very far away from here.”

35. “I can’t believe f*cking Jesus hasn’t called me back. I left him a message like four hours ago.”

36. “What do you expect me to do with all these great ideas? Put them in a tub and clean myself with them? ‘Cause, that’s what soap is for Lois.”

37. “Don’t you understand what drinking means to us workin’ stiffs? It helps us forget about our day and tell our children we love them with a straight face.”

38. “I’ll tell you, Lois. High school is a lot more fun this time around, and it’s a lot safer now that all the kids have guns.”

39. “I’m afraid I have some very bad news, your wife’s gonna be a vegetable. You’re gonna have to bathe her, feed her, and care for her for the rest of your life. No, no, no, I’m just kidding. She’s dead.”

40. “They better not be expecting us to give money because I gave at church last Sunday, and I’m pretty sure it all goes to the same God.”

41. Peter Griffin: “Brian, there’s a message in my alphabet cereal. It says ‘oooooo.'”

Brian Griffin: “Peter, those are Cheerios.”

Hilarious Peter Griffin Quotes to Learn About His Married Life

42. “Secrets are what keeps a marriage fresh.”

43. “Remember how you wanted that new wedding engagement ring? Well, I got a horse.”

44. “If gays wanna get married and be miserable like the rest of us, I say we should let ’em.”

46. “You wanna talk about awkward moments? Once, during sex, I called Lois ‘Frank.’ Your move, Sherlock.”

47. “Before you read that, you need to know one thing. I’m the one who’s been throwing out your beige bras. Guys don’t like beige bras.”

48. “This is a story of love and loss, fathers and sons, and the foresight to retain international merchandising rights. This is the story of Star Wars. Let’s begin with part four.”

49. “I don’t know who you are. I don’t know what you want, but I have a very particular lack of skills. I will never be able to find you. But what I do have is two dollars and a Casio wristwatch. You can have one of them.”

50. “Lois, if God wanted me to not sleep with my wife, he would have made me John Travolta.”

Did These Peter Griffin Quotes Inspire You to Be Honest About What You Think?

Family Guy uncovered the imperfections of the family members in a light manner that made the characters relevant and relatable. With Peter Griffin’s hilariously honest lines, the show became a go-to for everyone who needs a laugh or someone they can relate to.

Although some might be annoyed by his character, he tells the story of being a parent and a husband. He is authentic to himself and displays the imperfections of the typical person. There is indeed much to learn from the show’s characters, and Peter Griffin is a great example of that!

We hope that these quotes were able to entertain you today. Life is short, so don’t forget to have fun with the littlest things and be true to yourself like Peter Griffin!

Which of his quotes did you like the most? Is Peter Griffin your favorite character? Comment below!