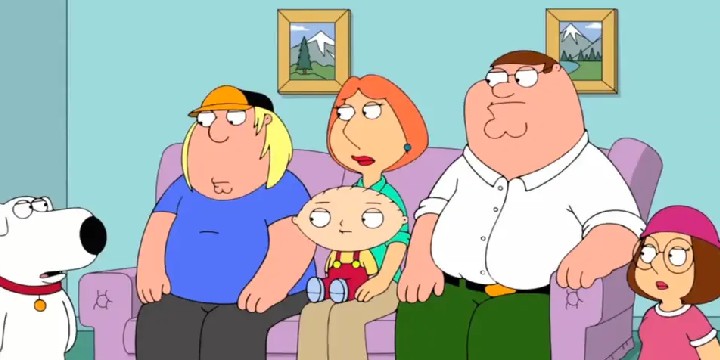 Revisit the lines from one of the longest-running adult animated shows by reading these Family Guy quotes.

Family Guy is a sitcom about the adventures of the Griffin family. The show is one of the longest-running cartoon shows with over 380 episodes since its initial release in 1999.

One of the reasons people are still watching Family Guy is how it transcends the comedic limits by opening discussions about society. The Griffin family’s beliefs and roots reflect society’s absurdity in different aspects of life. It definitely surpasses what is okay to laugh at, making the show so popular.

So, if you are curious about the sitcom or are already a fan, then these quotes are for you. Check out our entire collection below and be taken to Family Guy’s most iconic and famous lines.

2. “I have an idea so smart that my head would explode if I even began to know what I was talking about.” – Peter Griffin

3. “The only reason we die is because we accept death as an inevitability.” – Stewie Griffin

4. “Well, the best advice I can give is that you never know who’s gonna grow up to be famous, so just make yourself available.” – Lois Griffin

5. “Oh yeah? Can you read my mind? Can you tell what I’m thinking? I’m thinking shut up and get a salad!” – Stewie Griffin

6. “I guess we’ve learned that no matter who you are or where you come from, life is a terrible thing.” – Peter Griffin

7. “You better watch who you’re calling a child, Louis. If I’m a child, you know what that makes you? A pedophile. And I’ll be damned if I’m going to stand here and be lectured by a pervert.” – Peter Griffin

9. “Hey, how about a little less questions and a little more shut the hell up?” – Brian Griffin

10. “If gays wanna get married and be miserable like the rest of us, I say we should let ’em.” – Peter Griffin

11. “Well, you guys, we did it. We finally went to a restaurant without somebody yelling at us and the rest of the place applauding them.” – Peter Griffin

12. “Remember, Brian, don’t touch anything when we are in the past. Even stepping on a mosquito could create a chain reaction that drastically alters the present.” – Stewie Griffin

13. “This is serious. We need to think about our kids’ education. Of course, it’s already too late for Meg to go to college, and Chris is too dumb to get in anywhere.” – Lois Griffin

14. “When the world is mine, your death should be quick and painless.” – Stewie Griffin

15. “I got drunk and then got my picture taken. So that way, when I get pulled over for drunk driving, I look the same as on my license.” – Peter Griffin

16. Peter Griffin: “Brian, there’s a message in my alphabet cereal. It says ‘oooooo.'”

Brian Griffin: “Peter, those are Cheerios.”

17. “How does it feel to be the least cultured person at a bus station?” – Stewie Griffin

20. “Oh jeez. This hangover is killing me. I haven’t felt this crappy since the time I went to that museum.” – Peter Griffin

22. “Jeez, Lois. I spent all morning on a boat drinking beer, telling jokes, and screwing around. How about a little me-time?” – Peter Griffin

23. “There’s always been a lot of tension between Lois and me. And it’s not so much that I want to kill her. It’s just, I want her not to be alive anymore.” – Stewie Griffin

25. “What? Gosh, it’s not like the internet to go crazy about something small and stupid.” – Peter Griffin

26. “Brian, I think we can get John Mayer to stop tweeting again, but we all got to work together.” – Stewie Griffin

27. “By the way, Lois, I got a piercing over there. I’m not going to tell you where but I will give you a hint: it wasn’t on my nose or my ear, and it was one of my balls.” – Peter Griffin

28. “Damn you, vile woman! You’ve impeded my work since the day I escaped from your wretched womb.” – Stewie Griffin

29. “When you poop in your dreams, you poop for real.” – Peter Griffin

30. “Whose leg do you have to hump to get a dry martini around here?” – Brian Griffin

31. “You know, mother, life is like a box of chocolates: you never know what you’re going to get. Your life, however, is more like a box of active grenades!” – Stewie Griffin

34. “I’m not drunk! I just have a speech impediment, a stomach virus, and an inner ear infection.” – Brian Griffin

35. “Am I to spend the entire day wallowing around in my own feces? A little service here!” – Stewie Griffin

36. “They better not be expecting us to give money because I gave at church last Sunday, and I’m pretty sure it all goes to the same God.” – Peter Griffin

38. “Hey Lois, I didn’t flush. I want you to come see it. Looks like the Starbucks mermaid.” – Peter Griffin

39. “You know, you are doing a great job, Chris. Why don’t you jerk the rest of the day off.” – Glenn Quagmire

40. “I just want peace on Earth. That’s better than being selfish like Meg, right? So I should get more than her.” – Chris Griffin

Also read: The Simpsons Quotes, King of the Hill Quotes

45. “Remember, if you screw this up, mommy’s going to kill all of your toys.” – Lois Griffin

46. “This is a man who thinks the plural of goose is sheep.” – Lois Griffin

47. “I always thought dogs laid eggs. And I learned something today.” – Peter Griffin

48. “Brian, why does everything you touch turn to garbage?” – Stewie Griffin

49. “I swear to God, I thought dogs could breathe underwater.” – Peter Griffin

50. “You could kill all the girls who are prettier than me.” – Meg Griffin

52. “Whatever kills me makes me stronger.” – Peter Griffin

53. “Lois might be worth a million dollars to you, but to me, she’s worthless.” – Peter Griffin

55. “I can’t believe f*cking Jesus hasn’t called me back. I left him a message like four hours ago.” – Peter Griffin

58. “I have a confession to make, I did not like The Godfather.” – Peter Griffin

60. “Yeah, why are we here in this bomb shelter when I could be getting felt up by Kevin?” – Meg Griffin

What Do You Think of Family Guy’s Humor?

Family Guy has been making people laugh since 1999. As society’s views change and progress, many people have questioned if the show’s dark and satirical comedy has gone too far.

Whatever people think about it, the witty and brave writing of the show only caused its success and popularity. With the hilarious dynamics and personalities, viewers can certainly relate to some of the characters. Moreover, its difference from other animated comedy series makes it an addicting and enjoyable show.

We hope that these Family Guy quotes were able to make you laugh today! Remember to have fun and be critical of what you consume in mainstream media.

Are you a fan of Family Guy? Which of these quotes is your all-time favorite? Comment below!