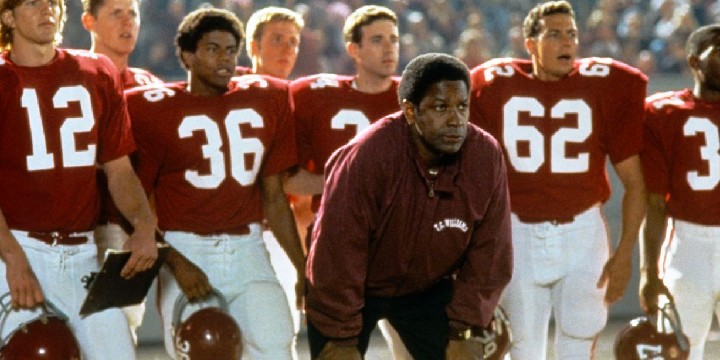 Let these Remember the Titans quotes inspire you with lessons on leadership, team effort, and success.

Remember the Titans is a biographical sports movie released in 2000. Its plot revolves around the story of Herman Boone’s efforts to train a high school football team into fierce and determined winners.

The movie was set in the ’70s, giving us a glimpse of a world where racial prejudice is prevalent.

Through this setting, we learn about compassion amidst bigotry and cultural differences. Moreover, with the help of the characters’ top quotes, we’re urged to overlook our differences and instead embrace our diversity.

Indeed, these realizations are critical if we want to be champions in our own lives, too!

So, read through this list of the movie’s best quotes that’ll give you insight into the importance of tirelessly working hard to reach your goals and how to be more accepting of others.

Don’t miss out on this gem, and read through to the end!

And make sure to check out these Coach Carter quotes and The Waterboy quotes.

1. “Whatever kind of ambition it took to do what you did around here, this world could use a lot more of it.” – Carol Boone

4. “Sometimes, life is hard for no reason at all.” – Carol Boone

6. “Does the term ‘cruel and unusual punishment’ mean anything to you?” – Darryl Stanton

7. “This is no democracy. It is a dictatorship. I am the law.” – Herman Boone

8. “Get back in there! You know what I’m talking about. You can’t be afraid of him!” – Bill Yoast

10. “I don’t scratch my head unless it itches, and I don’t dance unless I hear some music. I will not be intimidated. That’s just the way it is.” – Herman Boone

11. “People say that it can’t work, Black and White. Well, here, we make it work every day.” – Sheryl Yoast

12. “I think this is a very good time for prayer and reflection.” – Bill Yoast

13. “With all due respect, uh, you demanded more of us.” – Julius Campbell

15. “I hope you boys have learned as much from me this year as I’ve learned from you. You’ve taught this city how to trust the soul of a man rather than the look of him. And I guess it’s about time I joined the club.” – Bill Yoast

16. “Yes, you can. Your team needs you tonight. You’re the coronel. You’re going to command your troops!” – Herman Boone

17. “We’re in a fight. You boys are doing all that you can do. Anybody can see that. Win or lose, we gonna walk out of this stadium tonight with our heads held high. Do your best. That’s all anybody can ask for.” – Herman Boone

19. “Tonight, we’ve got Hayfield. Like all the other schools at this conference, they’re all White. They don’t have to worry about race. We do. Let me tell you something: you don’t let anyone come between us. Nothing tears us apart.” – Herman Boone

22. “You look like a bunch of fifth-grade sissies after a catfight! You got anger. That’s good. You’re gonna need it. You got aggression; that’s even better. You’re gonna need that, too. But any little two-year-old child can throw a fit! Football is about controlling that anger, harnessing that aggression into a team effort to achieve perfection!” – Herman Boone

23. “I don’t care if you like each other or not, but you will respect each other. And maybe, I don’t know. Maybe we’ll learn to play this game like men.” – Herman Boone

24. “A water break? Water is for cowards. Water makes you weak. Water is for washing blood off that uniform, and you don’t get no blood on my uniform. Boy, you must be outside your mind!” – Herman Boone

25. “In Greek mythology, the Titans were greater even than the gods. They ruled their universe with absolute power. Well, that football field out there, that’s our universe. Let’s rule it like titans.” – Herman Boone

27. “I’m not going to talk to you tonight about winning and losing. You’re already winners ’cause you didn’t kill each other up at camp.” – Herman Boone

28. “This is where they fought the battle of Gettysburg. Fifty thousand men died right here on this field, fighting the same fight that we are still fighting among ourselves today. This green field right here, painted red, bubblin’ with the blood of young boys. Smoke and hot lead pouring right through their bodies. Listen to their souls, men. I killed my brother with malice in my heart. Hatred destroyed my family. You listen, and you take a lesson from the dead. If we don’t come together right now on this hallowed ground, we too will be destroyed, just like they were.” – Herman Boone

29. “We have our disagreements, of course, but before we reach for hate, always, always, we remember the Titans.” – Sheryl Yoast

30. “Now, I ain’t saying that I’m perfect ’cause I’m not. And I ain’t gonna never be. None of us are. But we have won every single game we have played ’till now. So this team is perfect. We stepped out on that field that way tonight.” – Julius Campbell

32. “My daddy coached in Alexandria. He worked so hard my momma left him, but I stayed with coach. He needed me on that field.” – Sheryl Yoast

33. “Yes, you can. When I was 15 years old, I lost my mother and my father in the same month, Ronnie, same month. Twelve brothers and sisters, I was the youngest one of them, now I wasn’t ready either, but they needed me.” – Herman Boone

Remember the Titans Quotes to Highlight the Effects of Racism

35. “Well, I met Coach Taber. He won’t let Blacks play on his team. The way I see it, if these boys can fight a war together, they can play football together.” – William G. Bass

36. “When all this is over, me and you are gonna move out to the same neighborhood together, okay? And, um, and we’ll get old, and we’ll get fat. And there ain’t gonna be all this Black-White between us.” – Julius Campbell

Memorable Remember the Titans Quotes for Everyone Who Watched the Movie

37. Sheryl Yoast: “Coach Boone, you did a good job up here. You ran a tough camp from what I can see.”

Herman Boone: “Well I’m very happy to have the approval of a five-year-old.”

Sheryl Yoast: “I’m nine and a half, thank you very much.”

38. “All right, now, I don’t want them to gain another yard! You blitz all night! If they cross the line of scrimmage, I’m gonna take every last one of you out! You make sure they remember, forever, the night they played the Titans! Leave no doubt!” – Bill Yoast

39. “Honesty? You want honesty? Alright, honestly, I think you’re nothing: nothing but a pure waste of God-given talent. You don’t listen to nobody, man! Not even Doc or Boone! Shiver push on the line every time, and you blow right past ’em! Push ’em, pull ’em, do something! You can’t run over everybody in this league, and every time you do, you leave one of your teammates hanging out to dry, me in particular!” – Gerry Bertier

41. Herman Boone: “Why don’t you get this little girl some pretty dolls, or something coach?”

43. “I know football and what you did with those boys. You were the right man for the job, coach!” – Bill Yoast

44. “You got your brothers on the team and got your daddy. You know who your daddy is, don’t you?” – Herman Boone

More Remember the Titans Quotes That Are Worth Reading

45. “Shut up. I don’t want to see your smilin’ and stuff in and hear all your minstrel show singing on this bus.” – Julius Campbell

Louie Lastik: “Man, I just gave your momma a piggy-back ride, and she weighs twice as much as I do!”

48. “Alice, are you blind? Don’t you see the family resemblance? That’s my brother.” – Gerry Bertier

49. “Particulars? Man, no matter what I tell you, you ain’t never gonna know nothing about me.” – Julius Campbell

Did These Quotes Make You Think About the Value of Kindness in Winning?

Sports have a good way of teaching people about the value of teamwork and cooperation. Sometimes, we focus so much on being competitive that we forget how important it is to be compassionate to other people in the game. This is one of the best and most useful lessons we can learn from Remember the Titans.

From start to finish, it reminds us of the value of our differences in setting goals and reaching them. As we’ve seen from Remember the Titans, the team managed to win by resolving their conflicts and recognizing that they all have a common goal to reach.

Doing your best on your own to win is great. But, learning to adjust, accept, and work together with others is all the more essential to reach the top.

So, build your relationship with your team members and recognize your differences. Use each other’s unique qualities to create a more complete and unbreakable team!

Remember the Titans may be centered on sports, but its message transcends beyond its genre. So, when you watch this remarkable movie again, remind yourself of the top quotes in this collection and the lessons you’ve learned from them.

Did you enjoy these Remember the Titans quotes? Which quote is your favorite? Comment below!