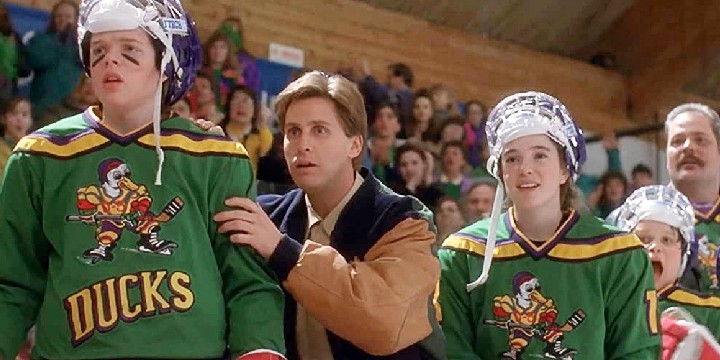 No matter what kind of sport you play, you’ll no doubt learn a thing or two from these The Mighty Ducks quotes we’ve compiled.

The Mighty Ducks is a trilogy released by Disney about an ice hockey team composed of young kids. Everything started in the 1992 release, where an attorney was pulled over for drunk driving. To absolve his crime, he was sentenced to 500 hours of community service.

This is when he meets the Twin Cities ice hockey team. Sadly, they are losers in the league and almost always rank last. Coupled with Gordon Bombay’s dislike for kids, it just seems like a recipe for disaster.

However, the kids slowly melted Gordon’s cold heart, and they worked together to improve the team’s standings. The plot itself is simple enough, but the heartwarming messages in the movie captured the hearts of fans, allowing for second and third installments.

We’ve gathered the best quotes from the movies, so be sure you don’t miss out. Make sure you list down your favorites, too!

And don’t forget to check out these Rookie of the Year quotes and Paul Blart: Mall Cop quotes.

2. Frank Huddy: “You really stooped to an all-time low on this one, Bombay.”

Gordon Bombay: “I’m insulted by that, Frank. You have no idea how low I can stoop.”

Frank Huddy: “And what about justice, huh? That man, he should be in jail.”

Gordon Bombay: “It was your job to put him there, so don’t take it out on me! Next time do your job, Franky-Boy.”

3. “A quarter of an inch the other way and you would have missed completely.” – Charlie Conway

4. “Because it’s not worth winning if you can’t win big!” – Coach Jack Reilly

6. Gordon Bombay: “You guys know what it’s like to be misunderstood, right?”

The Mighty Ducks Quotes That Are Simply Ionic

8. Gordon Bombay: “Now here’s the long and the short of it: I hate hockey, and I don’t like kids.”

Peter Mark: “What’s this supposed to be, a pep talk?”

Gordon Bombay: “I’m sure this will be a real bonding experience. One day, maybe one of you will write a book about it in jail.”

Gordon Bombay: “To think I wasted all those years worrying about what you thought. You’re going down Reilly.”

13. Mr. Ducksworth: “Are you prepared to lose your job over some kids, some game?”

Bombay: “That depends, sir. Are you prepared to fire me over some kids, some game?”

14. “Yo dude! You are obviously in the wrong hood. This is my dominion, and it’s a drug-free zone. You understand? Now I’m feelin’ generous today. So I’m gonna let you get your sorry vanilla booty out of here before we be usin’ your eyeballs as hockey pucks!” – Jesse Hall

Unforgettable The Mighty Ducks Quotes From the Sequels

16. “You cannot be afraid to lose. That’s how you gain the confidence to attack the puck when the game isn’t yours.” – Coach Ted Orion

17. “I hate ties. They’re like kissing your brother.” – Julie Gaffney

18. “And when the wind blows hard, and the sky is black, Ducks fly together!” – Michelle McKay

What Quote From The Mighty Ducks Can You Relate to the Most?

The Mighty Ducks is an iconic movie trilogy for every 90s kid who grew up watching it. However, apart from the simple yet relatable plot, it’s remembered for its morals and what it teaches kids. Sports is a good starting point, but the movie goes above and beyond by helping its viewers know the right way to play.

Every coach out there wants nothing else but for their team to win. Given that, they are usually willing to do everything they can to propel their team to greatness. This is what Gordon Bombay felt.

Unfortunately, in the beginning, Gordon resulted in trying to cheat their way into a win. Obviously, it didn’t work out; even if it did, it wouldn’t be something they should be proud of. He realized his mistake and apologized to the kids he was leading.

Cheating will never be the correct answer to anything. This is a straightforward lesson we can learn from The Mighty Ducks that we can apply to any aspect of our lives.

There will be a lot of strategies we can try to get closer to our goals. However, we should always steer clear of cheating. So, remember that the right way to play is by being honest, respectable, and open-minded.