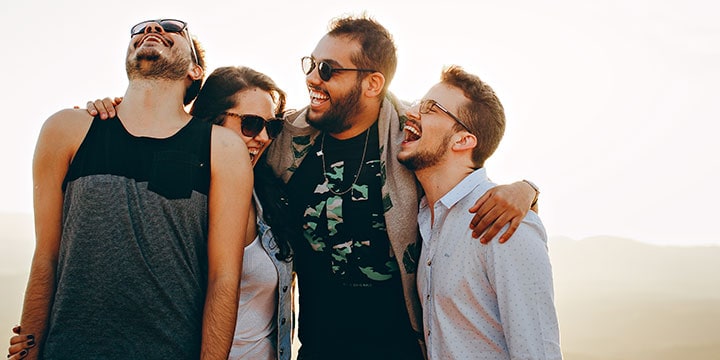 Sarcastic quotes are good to keep in your arsenal whenever you need a smart and sharp comeback!

We get annoyed, bored, or in extreme situations, even angry about idiocy or lack of common sense. Having sarcasm and a bunch of sarcastic quotes would be extremely helpful during these times.

Sarcasm is defined to be the use of irony to convey your contempt or dislike of something.

Plainly speaking, it’s saying the opposite of what you want to say to mock something, insult someone, or even just be funny.

Sarcastic people usually have sharp minds that can tweak even the simplest words into the snidest or mocking comment.

So, if you’re curious about sarcasm or need a list of sarcastic quotes to keep in your pocket, you’ve come to the right place.

Scroll through to the end and list down your favorite quotes!

Continue to the collection below.

And don’t forget to check out these funny quotes and positive quotes.

1. “I love sarcasm. It’s like punching people in the face but with words.” – Anonymous

2. “I’m not sarcastic. I’m just intelligent beyond your understanding.” – Anonymous

3. “Sometimes I need what only you can provide: your absence.” – Ashleigh Brilliant

4. “I’m not saying I hate you, what I’m saying is that you are literally the Monday of my life.” – Anonymous

5. “Don’t worry about what people think. They don’t do it very often.” – Anonymous

6. “When people ask me stupid questions, it is my legal obligation to give a sarcastic remark.” – Anonymous

7. “I’ll always cherish the original misconception I had of you.” – Anonymous

8. “Insanity is hereditary; you get it from your children.” – Sam Levenson

9. “They say each day is a gift! Well, I want to know where customer service is so I can return this one!” – Anonymous

10. “I feel so miserable without you, it’s almost like having you here.” – Anonymous

12. “No, you don’t have to repeat yourself. I was ignoring you the first time.” – Anonymous

14. “If it looks like I give a damn, please tell me. I don’t want to give off the wrong impression.” – Anonymous

15. “My level of sarcasm has gotten to a point where I don’t even know if I am kidding anymore.” – Anonymous

Sarcastic Quotes to Highlight What It Is

16. “Sarcasm is the secret language that everyone uses when they want to say something mean to your face.” – Anonymous

17. “Sarcasm helps me overcome the harshness of the reality we live, eases the pain of scars, and makes people smile.” – Mahmoud Darwish

18. “Sarcasm—the ability to insult idiots without them realizing it.” – Anonymous

19. “Sarcasm—because arguing with stupid people just wouldn’t be as much fun.” – Anonymous

20. “Sarcasm is the body’s natural defense against stupidity.” – Anonymous

21. “Sarcasm—helping the intelligent politely tolerate the obtuse for thousands of years.” – Anonymous

22. “Sarcasm is the lowest form of wit but the highest form of intelligence.” – Oscar Wilde

24. “When life gives you lemons, squeeze them in people’s eyes.” – Anonymous

27. “If life gives you lemons, then be thankful for it. I have been getting only the peels for as long as I can remember!” – Anonymous

28. “When something goes wrong in your life, just yell, ‘Plot twist’ and move on.” – Anonymous

29. “If ignorance is bliss. You must be the happiest person on this planet.” – Anonymous

30. “Instead of, ‘Have a nice day,’ I think I’ll start saying, ‘Have the day you deserve.’ You know, let karma sort things out.” – Anonymous

32. “If you think nobody cares if you’re alive, try missing a couple of car payments.” – Anonymous

33. “Have some fun with your life. Call in sick to places you don’t even work at.” – Anonymous

Sarcastic Quotes on People and Their Characteristics

35. “Light travels faster than sound. This is why some people appear bright until they speak.” – Steven Wright

36. “I don’t have the energy to pretend to like you today.” – Anonymous

37. “Unless your name is Google, stop acting like you know everything.” – Anonymous

38. “Everyone has the right to be stupid, but you are abusing the privilege.” – Anonymous

39. “Tell me. Is being stupid a profession or are you just gifted?” – Anonymous

40. “Life is full of disappointments and I just added you to the list.” – Anonymous

41. “You know what I like about people? Their dogs.” – Anonymous

42. “I like long walks, especially when they are taken by people who annoy me.” – Fred Allen

44. “Find your patience before I lose mine.” – Anonymous

Epic Sarcastic Quotes That Will Burn

53. “Me pretending to listen should be enough for you.” – Anonymous

55. “Please cancel my subscription to your issues.” – Anonymous

56. “People say that laughter is the best medicine. Your face must be curing the world!” – Anonymous

57. “I would like to apologize to anyone I have not offended yet. Please be patient. I will get to you shortly.” – Anonymous

59. “My tolerance for idiots is extremely low today. I used to have some immunity built up, but obviously, there is a new strain out there.” – Anonymous

60. “Marriage. Because your crappy day doesn’t have to end at work.” – Anonymous

61. “Sometimes the amount of self-control it takes to not say what’s on my mind is so immense, I need a nap afterward.” – Anonymous

62. “The whiskey tastes like I’m about to tell you how I really feel.” – Anonymous

63. “What doesn’t kill you gives you a set of unhealthy coping mechanisms and a dark sense of humor.” – Anonymous

64. “Marriage is a wonderful institution, but who wants to live in an institution?” – Groucho Marx

65. “If you want to change the world, do it while you’re single. Once you’re married, you can’t even change the TV channel.” – Anonymous

Sarcastic Quotes for When You Need a Witty Comeback

66. “That is the ugliest top I’ve ever seen, yet it compliments your face perfectly.” – Anonymous

69. “I’m sorry. While you were talking, I was trying to figure out where the hell you got the idea I cared.” – Anonymous

70. “I’ll try being nicer if you try being smarter.” – Anonymous

71. “Sorry for being late. I got caught up enjoying my last few minutes of not being here.” – Anonymous

72. “My silence doesn’t mean I agree with you. It’s just that your level of ignorance has rendered me speechless.” – Anonymous

Funny Sarcastic Quotes That Will Make You Laugh

75. “Mirrors can’t talk, lucky for you they can’t laugh either.” – Anonymous

76. “I don’t believe in plastic surgery. But in your case, go ahead.” – Anonymous

77. “I am busy right now, can I ignore you some other time? – Anonymous

78. “I’m sorry I hurt your feelings when I called you stupid. I really thought you already knew.” – Anonymous

79. “Ugliness can be fixed, stupidity is forever.” – Anonymous

80. “I want to be the reason you look down at your phone and smile. Then walk into a pole.” – Anonymous

81. “Sometimes I wish I was an octopus so I could slap eight people at once.” – Anonymous

83. “I’m sorry. I was listening until, out of nowhere, I became distracted by this loud, obnoxious noise that turned out to be your voice.” – Anonymous

84. “I don’t always tolerate stupid people. But when I do, I’m probably at work.” – Anonymous

85. “Tell me how I have upset you because I want to know how to do it again.” – Anonymous

86. “Sometimes I wish I were a nicer person, but then I laugh and continue my day.” – Anonymous

87. “I love deadlines, I like the whooshing sound they make as they fly by.” – Anonymous

89. “If you wrote down every single thought you ever had, you would get an award for the shortest story ever .” – Anonymous

90. “Don’t take yourself so seriously, no one else does.” – Anonymous

Do You Know Someone Who’s Just Great at Witty and Sarcastic Remarks?

As Oscar Wilde said, “Sarcasm is the lowest form of wit but the highest form of intelligence.” To use sarcasm correctly, you’d have to have a sharp mind. It takes tremendous wit to use words as your armor and defense, after all.

However, one must be cautious when using sarcasm while interacting with others. While these remarks are laced with humor, there might be times when one can go overboard. Keep in mind that sarcasm can easily be misunderstood; if we aren’t careful, we might permanently destroy our relationship with others.

So, try to strike a good balance between what you actually want to convey and the humor you’re trying to mix in. With that, we hope these sarcastic quotes were able to give you a line or two to use when you need a witty comeback.

Do you consider yourself to be a sarcastic person? Which quotes would you use next? Comment below.