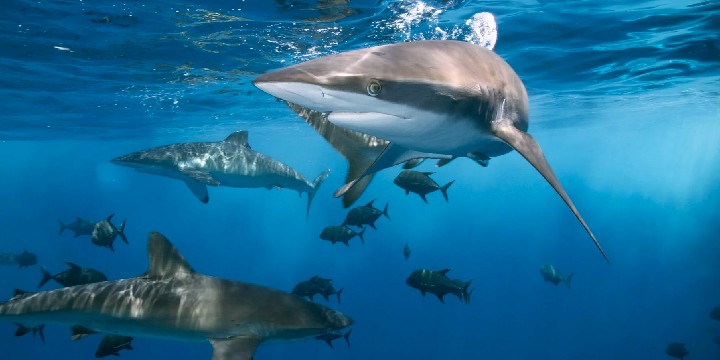 Here are the top 50 shark quotes that will make you appreciate and love the existence of this large and dangerous predator!

Sharks are the largest and most terrifying-looking fish in the sea. They have a streamlined body that allows them to swim through the water easily. As top predators in the ocean, they are vital for maintaining a healthy food web.

With them being present even before the dinosaurs’ age, we’re sure you’ll learn some meaningful lessons from them!

With that, we’ve gathered the funniest, most amusing, and most informative shark quotes to better understand them.

Don’t forget to take notes on the life lessons you’ll learn from sharks!

And make sure to read these animal quotes and dolphin quotes.

1. “Sharks are beautiful animals, and if you’re lucky enough to see lots of them, that means that you’re in a healthy ocean. You should be afraid if you are in the ocean and don’t see sharks.” – Sylvia Earle

2. “Sharks aren’t the monsters we make them out to be.” – Yasmine Hamdi

4. “We provoke a shark every time we enter the water where sharks happen to be, for we forget: The ocean is not our territory, it’s theirs.” – Peter Benchley

5. “The shark is the apex predator in the sea. Sharks have molded evolution for 450 million years. All fish species that are prey to the sharks have had their behavior, their speed, their camouflage, their defense mechanisms molded by the shark.” – Paul Watson

6. “Sharks are among the most perfectly constructed creatures in nature. Some forms have survived for 200 million years.” – Eugenie Clark

7. “Sharks are the lions of the sea. They glamorize the oceanic glory.” – Munia Khan

8. “The chances of that shark attacking you in any way is so remote. The sea should be enjoyed, the animals in it. When you see a shark underwater, you should say, ‘How lucky I am to see this beautiful animal in his environment!’” – Eugenie Clark

9. “I am a shark, the ground is my ocean, and most people can’t even swim.” – Rickson Gracie

10. “Sharks are being driven to extinction because people want to eat their fins and their flesh.” – Barbara Block

Inspiring Shark Quotes That We Can All Learn From

11. “I just believe that sometimes in life you’re like a shark—you have to keep moving through water; otherwise, you’ll die.” – Michelle Ryan

12. “Advice from a shark—take a bite out of life. Stay active. Fin for yourself. Live Fiercely. Stay sharp!” – Anonymous

15. “I’m not saying that everyone should swim with sharks, but sometimes you have to jump over your own shadow in order to learn something that you will never forget for the rest of your life. Then you know you can conquer your fears.” – Heidi Klum

16. “Interesting fact: a shark will only attack you if you’re wet.” – Sean Lock

17. “I’m afraid of sharks—but only in a water situation.” – Demetri Martin

19. “You know the most dangerous thing in the water? A shark fart.” – Gary Busey

21. “Many people continue to think of sharks as man-eating beasts. Sharks are enormously powerful and wild creatures, but you’re more likely to be killed by your kitchen toaster than a shark!” – Ted Danson

22. “This shark is in the water! Be silly to see a shark flying around!” – Conan O’Brien

23. “Turns out, I couldn’t catch them—or even get close to them. I realized that sharks are amazing, beautiful animals who have absolutely no interest in checking me out.” – Malin Akerman

25. “Sharks are like dogs. They only bite when you touch their private parts.” – Rob Schneider

Shark Quotes for Everyone Who’s Interested in These Creatures

26. “But as they say about sharks, it’s not the ones you see that you have to worry about, it’s the ones you don’t see.” – David Blaine

27. “I don’t think there’s such a thing as an unprovoked shark attack.” – Peter Benchley

28. “You’re more likely to drown in the sea of sameness than get eaten by a shark while navigating new waters.” – Amy Jo Martin

29. “If in shark-infested waters, don’t assume the fin coming toward you is a dolphin.” – Mary Russel

30. “Somewhere in the ocean, a shark was missing its cold eyes because this man had them.” – Steve Hamilton

31. “Sharks have been swimming the oceans unchallenged for thousands of years; chances are, the species that roam corporate waters will prove just as hardy.” – Eric Gelman

32. “A shark feels no sorrow, no remorse, hopes for nothing, dreams of nothing, has no illusions about itself or anything beyond itself.” – Rick Yancey

33. “Almost any shark, three or four feet long, could kill a human being if it chose to do it. It could make you bleed to death. But they don’t.” – Peter Benchley

35. “Remove the predators, and the whole ecosystem begins to crash like a house of cards. As the sharks disappear, the predator-prey balance dramatically shifts, and the health of our oceans declines.” – Brian Skerry

36. “I have a ridiculous fear of sharks but I’d jump in the water in a second for an amazing role.” – Kate Mara

37. “I’ve seen sharks in the ocean, it hasn’t made me get out of the ocean; that’s for sure.” – Luke Hemsworth

38. “A shark in a fish tank will grow eight inches but in the ocean, it will grow eight feet or more. The shark will never outgrow its environment and the same is true about you.” – Anonymous

39. “Sharks have a bad rep, but the truth is you have a greater chance of a vending machine falling on you than you do a shark attack.” – Katy Lee

40. “The shark heart slows down in the cold, just as our own heart would. But what sets it apart is where our heart would simply stop, the salmon shark keeps on ticking.” – Barbara Block

41. “Sharks are the criminals of the sea. Dolphins are the outlaws.” – Tony Robbins

47. “Humans are a much greater threat to sharks than sharks are to humans.” – Nicholas Boxer

50. “Sharks hug with their mouths.” – Anonymous

What Is It About Sharks That You Admire the Most?

Sharks come in many different shapes and sizes. They can taste, see, hear, and touch but primarily use their smell to find food.

When it comes to attacking an opponent, most sharks eat their prey whole or tear off large chunks of their bodies. They also bite people out of curiosity or to protect themselves from a perceived threat, or even because they confuse a human with prey.

Sharks are feared throughout the world. However, these creatures are not all bad and dangerous. We’d go far as to say that sometimes, sharks are more in danger of humans than humans are of sharks.

Despite being regarded as one of the world’s most feared sea mammals, these magnificent creatures teach us to keep moving forward to achieve our goals and desires, just as they do to pursue their prey without giving up. They serve as a reminder to be active in our lives and pursue our dreams with zeal.

So, did you enjoy reading our collection? Which quotes are your favorites? Participate in the discussion below!