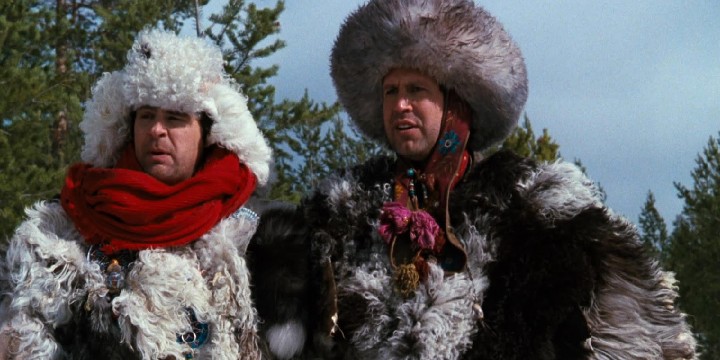 If you love movies that star Dan Aykroyd and Chevy Chase, you’ll adore this list of Spies Like Us quotes!

Spies Like Us zooms in on two government employees trying to escape their boring lives. To do so, they try to enter the CIA and become spies by taking one of their exams. The duo gets accepted into the agency, but not as spies.

Initially, Austin Millbarge and Emmett Fitz-Hume were simply elated that they could try something more exciting in their lifetimes. But, it soon became evident that they were only being used as decoys to expose America’s opponents.

They were quickly trained and rushed to their so-called mission while two professional agents started the agency’s primary objective. The funny thing is that the decoys could survive countless attacks while the professional agents were beginning to crumble. The impossibility of it all undoubtedly makes Spies Like Us such a timeless piece.

Learn more about the movie through the list below.

And don’t forget to check out these Team America quotes and Nacho Libre quotes.

1. “When we commissioned the Schmectel Corporation to research this precise event sequence scenario, it was determined that the continual stockpiling and development of our nuclear arsenal was becoming self-defeating. A weapon unused is a useless weapon.” – General Sline

2. “We mock what we don’t understand.” – Austin Millbarge

3. “Hard to believe it’s been only 15 minutes since I destroyed the world. In another 15 minutes, it’ll all be over. Such a short time to destroy a world. And to think my high school guidance counselor said I’d never amount to anything.” – Austin Millbarge

4. Mr. Keyes: “By your actions, sir, you are risking the future of the human race!”

General Sline: “To guarantee the American way of life, I’m willing to take that risk.”

Emmett Fitz-Hume: “I think it’s too late to try and impress them. Alright, stop right there, and I’ll bring back the sun. Okay. This is my sister. You can all have her. I hear she’s very good.”

6. Bob Hodges: “Every minute you don’t tell us why you are here, I cut off a finger.”

Emmett Fitz-Hume: “Mine or yours?”

7. “Are there any Paraguayans here? Well, of course, their requests for subsidies were not Paraguayan in, and of it is as it were, the United States government would never have if the president, our president, had not, and as far as I know, that’s the way it will always be. Is that clear?” – Emmett Fitz-Hume

8. Alice: “You’re not going to give me some bullshit that you’re dying, are you?”

9. Austin Millbarge: “They do seem to be headed in that general direction. Maybe your dick’s not so dumb.”

Emmett Fitz-Hume: “It got me through high school.”

Emmett Fitz-Hume: “What are you, my mother? Don’t you think I’m capable of determining my own time to go to the bathroom?”

Emmett Fitz-Hume: “Why am I here? Why are you here? Why is anybody here? I think it was

Jean-Paul Sartre who once said—how do you spell, ‘Sartre?’”

12. “I’m sorry I’m late; I had to attend the reading of a will. I had to stay till the very end, and I found out I received nothing, broke my arm.” – Emmett Fitz-Hume

13. “My objective? Well, I object to taking a girl out, you know, and buying her dinner, and then she won’t put out for you.” – Emmett Fitz-Hume

14. “You know, I must really like you, because I don’t like horses, and I hate guns!” – Austin Millbarge

15. Emmett Fitz-Hume: “Oh. Uh, will you hold my wallet for me while I take the test, please? There’s a thousand dollars in there, or maybe there isn’t. Know what I mean?”

Test Monitor: “Are you saying I can take this money if I help you pass the test?”

Emmett Fitz-Hume: “What do you think?”

Hilarious Spies Like Us Quotes That Are Full of Wit

Austin Millbarge: “To pee with.”

17. “Gentlemen, I think you both should realize the gravity of this moment. I’ve spent the last two and a half years of my life preparing for this penetration.” – Karen Boyer

19. “For once, I’m completely in agreement with my partner. I’m not going down there. Do you know what those things can do? Suck the paint off your house and give your family a permanent orange afro.” – Austin Millbarge

More Spies Like Us Quotes to Keep Your Energy Up

Austin Millbarge: “She wants to know why we’d do such a thing.”

Emmett Fitz-Hume: “Tell her so do we.”

Emmett Fitz-Hume: “Jesus, where did you learn your Russian? JCPenney?”

Russian Interrogator #2: “I knew it. Pay up, comrade.”

25. Captain Hefling: “What about that red Chinese radio chatter?”

Austin Millbarge: “The Chinese were merely using a simple polyphonetically-grouped 20-square-digit key transposed in boustrophedonic form with multiple nulls. I broke it with this.”

Captain Hefling: “A drogan’s decoder wheel? They put those into cereal boxes for kids.”

Austin Millbarge: “Yeah, I found it in a box of Lucky Charms.”

How Do You Think You’ll Fair in a Covert Spy Operation?

Emmett Fitz-Hume and Austin Millbarge went through a lot during their stint at the CIA. However ready they were to leave their desk jobs, the two were not prepared, in any way, to face the wrath of the field and their country’s opponents.

They encountered many attacks from the opposing forces that would make any typical human question their decisions. Yet, through some miracle, they survived and made their way out of each one.

This is not something we can count on happening in real life! Unlike the two stars of Spies Like Us, we cannot fast-track our way successfully into anything, especially military and spy training!

Spies Like Us does provide its fans with a good laugh, but remember that ample time to prepare and train is needed for us to master any skill or task. With that, we hope we were able to impart some morals from this comedy movie! Read through the list whenever you need a pick-me-up!