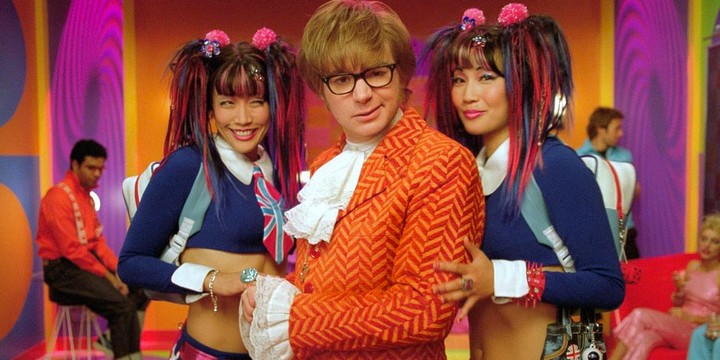 Bring along your mojo as we revisit the most iconic Austin Powers quotes that will take us on an exciting and shagadelic journey!

Austin Powers is a classic comedy that has the power to make its audience laugh hysterically. No matter how many times you watch it, its jokes and puns don’t get old.

The movie follows the life of a groovy special agent who was thawed out after 30 years to fight against his archnemesis, Dr. Evil. That’s already a great premise, to begin with. But, what makes this much more splendid is the performance of Mike Myers, who played multiple characters that are entirely different from each other.

The whole movie series is a pure fun ride that will make you laugh your heart out from start to finish. So, if you want to have a taste of Austin’s mojo, make sure to check out the quotes we’ve collected for you. Together, let’s chant the famous line from the movie series, “Shagadelic, baby!”

And don’t miss out these Dumb and Dumber quotes and Zoolander quotes.

1. “Well, you might be a cunning linguist, but I’m a master debater.” – Austin

2. “What we swingers were going against were uptight squares like you whose bag was money and world domination. We were innocent, man. If we had known the consequences of our sexual liberation, we would’ve done things much differently but the spirit would remain the same. It’s freedom, baby.” – Austin

3. “There are only two things I can’t stand in this world: people who are intolerant of other people’s cultures.” – Austin

4. “Pardon me for being rude, it was not me it was my food, it just popped up to say hello, but now it’s gone back down below.” – Austin

5. “Only two things scare me and one of them is nuclear war. Carnies. Circus folk. Nomads, you know. Smells like cabbage. Small hands.” – Austin

13. “You know what’s remarkable? That England looks in no way like Southern California.” – Austin

14. “Actually, my name is Austin Powers. Danger is my middle name.” – Austin

15. “I can’t believe Vanessa, my bride, my one true love, the woman who taught me the beauty of monogamy, was a fembot all along. Wait a tick, that means I’m single again! Oh, behave!” – Austin

19. “They are after my lucky charms! What? Why does everyone always laugh when I say that?” – Paddy

20. “My father would womanize. He would drink. He would make outrageous claims like he invented the question mark.” – Dr. Evil

Also read: She’s the Man Quotes, 10 Things I Hate About You Quotes

25. “Preparations A through G were a complete failure. But now, ladies and gentlemen, we finally have a working tractor beam, which we shall call—preparation H.” – Dr. Evil

26. “Wait Vanessa, I can explain. You see, I was looking for Dr. Evil when the Fembots came out and smoke started coming out of their jumblies. So I started to work my mojo, to counter their mojo; we got cross-mojulation, and their heads started exploding.” – Austin

31. “Hang in there, Mini-Me! If anything should happen to you, I don’t know what I would do. I’d probably move on and get another replica, but there would be a 10 minute period there where I would just be inconsolable.” – Dr. Evil

32. “Mole. Bloody mole. We aren’t supposed to talk about the bloody mole, but there’s a bloody mole winking me in the face. I want to cut it off, chop it off, and make guacamole.” – Austin

35. “There’s nothing more pathetic than an aging hipster!” – Dr. Evil

37. “The details of my life are quite inconsequential. Very well, where do I begin?” – Dr. Evil

49. “No doubt, love, but as long as people are still having promiscuous sex with many anonymous partners without protection while at the same time experimenting with mind-expanding drugs in a consequence-free environment, I’ll be sound as a pound!” – Austin

51. “Oh no, baby. You’re very shagadelic. I just didn’t want to fall in love again, and I thought you’d never love me without my mojo. It’s not you. You’re fab, you’re switched on, you’re a bit of alright! Yes!” – Austin

53. “My God, Vanessa’s got a fabulous body—I bet she shags like a minx—how do I let them know because of the unfreezing process, I have no inner monologue? I hope I didn’t just say that all out loud just now.” – Austin

54. “Well, no offense, but if that is a woman it does look like she was beaten with an ugly stick!” – Austin

Austin Powers Quotes and Conversations That You Will Love

Vanessa: “How can you tell?”

Austin: “I never forget a pussy—cat.”

60. “Are those, frickin’ sharks with frickin’ laser beams attached to their heads?” – Dr. Evil

Scott Evil: “No! Maybe like work in a petting zoo.”

Scott Evil: “You always do that!”

62. “That really hurt! I’m gonna have a lump there, you idiot! Who throws a shoe? Honestly! You fight like a woman!” – Austin

Austin Powers Quotes to Revisit Some of the Movies’ Hilarious Scenes

65. “First, I plan to soil myself. Then I’m going to regroup and come up with a new plan. Any thoughts?” – Austin

66. “No, I mean, literally, how could you do it? The man’s so fat, the sheer mechanics of it are mind-boggling.” – Austin

67. “Well everyone has their own flying car, entire meals come in pill form, and the Earth is run by damn dirty apes.” – Austin

Austin: “Finally those capitalist pigs will pay for their crimes, eh? Eh comrades?”

Did These Quotes Manage to Orchestrate a Roar of Laughter From You?

Austin Powers is undeniably one of the most outstanding comedy movie series produced up to this date. It has just the right balance between time travel, sci-fi, comedy, and sexuality, making fans want more! Though it may seem like this movie series is just for fun, you might still get a worthy lesson from it.

Every scene from the movie series showed us an extremely confident Austin, who can win both human and robotic attraction. His enthusiasm even made him overcome the challenge of adapting to an entirely new world right after he was defrosted.

Another thing we can learn from Austin and the rest of the characters is to always face life with a smiling face. Sure, life may strike us with various complications along the way, but we should not let this snatch away our happiness. Always remember to be graceful even under pressure.

No doubt, Austin Powers is a great movie filled with laughs and lessons. The next time you watch it, make sure to keep the lessons you’ve gathered from this collection. Maybe you’ll see the characters and their lines in a whole different light!

Which quote do you think is the funniest? What did you learn from Austin Powers? Comment below!