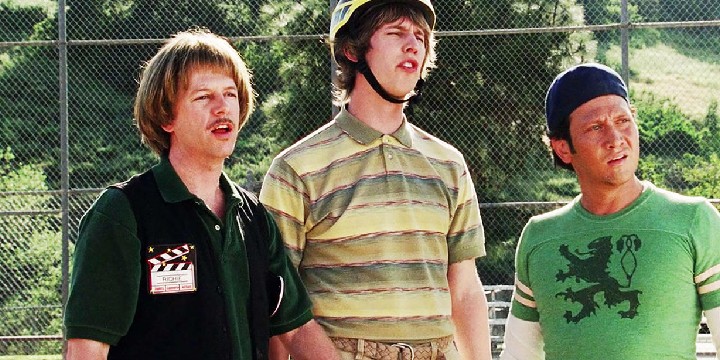 If you like comedy movies packed with great life lessons, don’t miss out on these The Benchwarmers quotes that we’ve collected!

The Benchwarmers is a movie that tells the story of three friends who formed a three-person baseball team with the help of a baseball-loving millionaire. As children, they were humiliated on the baseball field. Now, they want to take on the meanest bullies in the Little League.

This trio came to the rescue after seeing some kids bullying their friend’s son. You’d think they teach the kid to retaliate, but instead, they compete in a baseball game and teach them a lesson!

Have you been picked on as a child, too? Read this list of quotes to get a glimpse of how they were able to become the hero every bullied kid wished they had!

And don’t miss out these Trading Places quotes and Three Amigos quotes.

1. Richie Goodman: “He just did that steroid-free!”

Richie Goodman: “Something that makes your ‘pee-pee’ smaller.”

Clark Reedy: “Oh—there must be steroids in macaroni!”

2. Gus Matthews: “Clark, could you not pick your nose in front of me?”

Gus Matthews: “Scratching what? Your brain?”

3. Richie Goodman: “Clark. You kissed a girl before I did?”

Clark Reedy: “This is way better than macaroni.”

4. Gus Matthews: “Clark! Try to hit the ball in the strike zone.”

5. Richie Goodman: “What do you think of my future wife?”

The Benchwarmers Quotes to Complete Your Day

Clark Reedy: “Makers of what? Poop?”

Clark Reedy: “I’ve never been on a baseball field; if I did, the kids in my neighborhood would spit loogies on my forehead.”

Clark Reedy: “My mom said it would give me diarrhea.”

Gus Matthews: “That’s ridiculous, Clark. You have to try it at least once.”

Troy: “Aren’t you our paperboy?“

9. Gus Matthews: “I think this is a sign that you should get a car.”

Clark Reedy: “My mom said I should hold off on getting my license for another year. You know, just to make sure my reflexes are fully developed.”

10. “Hold on, I got a text from my mom—no way, we’re having macaroni tonight that means garlic bread! Yes!” – Clark Reedy

The Benchwarmers Quotes That Are Unforgettable

11. “My wife is the only one who gets to twist these man titties.” – Gus Matthews

Clark Reedy: “I told Gus that we would be there, and if we don’t show up, that makes me a liar—and that’s not what I’m about—not now, not ever.”

Hilarious The Benchwarmers Quotes to Amuse You

17. Marcus Ellwood: “Do you still think I look like Yoda?”

Richie Goodman: “Never had a date.”

Gus Matthews: “Ugh, My wife and I are kinda working on it.”

Richie Goodman: “But I ticked it! It hit the bat!”

21. Brad: “Hey, what the—Clark? Richie? I hardly recognized you clowns without the underwear on your heads.”

Richie Goodman: “Brad. Wow, you have really not slimmed down.”

Wayne: “How’s the moon treating you.”

Howie Goodman: “Not a fan.”

Howie Goodman: “I brought you a present from the benchwarmers. You’re really good at baseball.”

What Is Your Stand on Bullying?

The Benchwarmers is undeniably a very funny movie. It may have gotten a lot of criticism because of all the adolescent jokes and profanities, but the message of the movie itself is wonderful.

Knowing what it’s like to be bullied, Gus, Richie, and Clark strike back after seeing a friend’s son being picked on by some neighborhood kids. What they failed to do as children, they did as adults. They stood up against bullies by forming a baseball team and competing with them.

At one point in our lives, we all might have experienced being pushed around by mean kids or colleagues. But, we hope that this list of quotes was able to inspire you to be fearless and not let other people put you down because of their hurtful words. You are so much more than that!