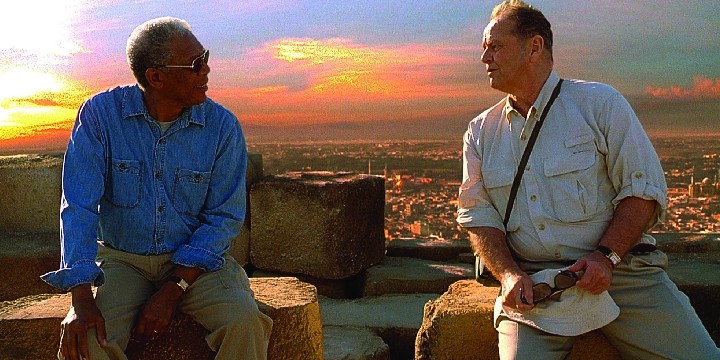 Reading these The Bucket List quotes will transport you back to your favorite parts of the movie!

The Bucket List tells the story of a car mechanic, Carter Chambers, and a billionaire Edward Cole—both terminally ill. They met in the hospital wards and found solace in one another. Eventually, they learn they only have a year or so to live.

Instead of being depressed by the news, Carter and Edward decided to create a bucket list together. They list what they wish to do before closing their eyes forever, then decide to start ticking off each one.

Carter and Edward escape the wards to pursue the things they’ve always wanted to do! To cross items off their bucket list, these two friends had to push their limits, overcome their fears, and go beyond their potential.

Indeed, The Bucket List inspires us to keep pursuing the things that’ll make us happy. To know more about their list and journey, just keep on reading.

Check out the whole collection below.

And don’t miss out these Eat Pray Love quotes and The Fault in Our Stars quotes.

1. “You measure yourself by the people who measure themselves by you.” – Carter Chambers

2. “Three things to remember when you get older—never pass up a bathroom, never waste a hard-on, and never trust a fart.” – Edward Perriman Cole

3. “You know, the ancient Egyptians had a beautiful belief about death. When their souls got to the entrance to heaven, the guards asked two questions. Their answers determined whether they were able to enter or not. ‘Have you found joy in your life?’ ‘Has your life brought joy to others?’” – Carter Chambers

5. “Edward Perriman Cole died in May. It was a Sunday in the afternoon, and there wasn’t a cloud in the sky. He was 81 years old. Even now, I can’t claim to understand the measure of a life, but I can tell you this. I know that when he died, his eyes were closed, and his heart was open. And I’m pretty sure he was happy with his final resting place because he was buried on the mountain, and that was against the law.” – Carter Chambers

6. “Good afternoon. My name is Edward Cole. I don’t know what most people say on these occasions because, in all honesty, I’ve tried to avoid them. The simplest thing is I loved him, and I miss him. Carter and I saw the world together, which is amazing when you think that only three months ago, we were complete strangers. I hope that it doesn’t sound selfish of me, but the last months of his life were the best months of mine. He saved my life, and he knew it before I did. I’m deeply proud that this man found it worth his while to know me. In the end, I think it’s safe to say that we brought some joy to one another’s lives, so one day, when I go to some final resting place, if I happen to wake up next to a certain wall with a gate, I hope that Carter’s there to vouch for me and show me the ropes on the other side.” – Edward Perriman Cole

7. “If life has taught me anything, it’s that 95% of the people are always wrong.” – Edward Perriman Cole

The Bucket List Quotes to Satisfy Your Curiosity About the Movie

8. “As something of an expert in diseases, I believe more people die from visitors than diseases.” – Edward Perriman Cole

Edward Perriman Cole: “Nobody cares what you think.”

Edward Perriman Cole: “Just because I told you my story does not invite you to be a part of it.”

Carter Chambers: “Oh, like the lady in the bar?”

Edward Perriman Cole: “I build a billion-dollar business up from nothing. Presidents have asked my advice, I have dined with royalty, and I’m supposed to make out like what? This trip was supposed to mean something to me. Like it was gonna change me? How did you see it playing out? Carter, I knock on the door, and she answers, she’s surprised and angry, but I tell her how much I love her and miss her. And oh, by the way, I’m gonna be dead soon, so I’m reaching out to you because I don’t wanna die alone?”

Edward Perriman Cole: “I’m not everyone. This was supposed to be fun. That’s all it ever was.”

Carter Chambers: “Not yet.”

Carter Chambers: “Fighting for my life. You?”

13. Edward Perriman Cole: “I envy people who have faith; I just can’t get my head around it.”

Carter Chambers: “Maybe, because your head’s in the way.”

15. Carter Chambers: “How do you plan on kissing the most beautiful woman?”

16. Edward Perriman Cole: “The sequel was like that. She never backed me up on anything.”

Kyle the Parachutist: “Maybe because you called her the sequel.”

17. “We live, we die, and the wheels on the bus go round and round.” – Edward Perriman Cole

18. “What does a snail have to do to reincarnate? Leave the perfect trail of slime?” – Edward Perriman Cole

19. Edward Perriman Cole: “These cats eat the beans, digest them, and then defecate. The villagers then collect and process the stools. It is the combination of the beans and the gastric juices of the tree cat that give Kopi Luwak its unique flavor and aroma. You’re sh*tting me!”

Carter Chambers: “Cats beat me to it!”

20. “Dear Edward, I’ve gone back and forth the last few days trying to decide whether or not I should even write this. In the end, I realized I would regret it if I didn’t, so here it goes. I know the last time we saw each other, we weren’t exactly hitting the sweetest notes-certain wasn’t the way I wanted the trip to end. I suppose I’m responsible and for that, I’m sorry. But in all honesty, if I had the chance, I’d do it again. Virginia said I left a stranger and came back a husband. I owe that to you. There’s no way I can repay you for all you’ve done for me, so rather than try, I’m just going to ask you to do something else for me—find the joy in your life. You once said you’re not everyone. Well, that’s true—you’re certainly not everyone, but everyone is everyone. My pastor always says our lives are streams flowing into the same river towards whatever heaven lies in the mist beyond the falls. Find the joy in your life, Edward. My dear friend, close your eyes and let the waters take you home.” – Carter Chambers

The Bucket List shows that death is indeed inevitable and can come unexpectedly. We’ll never know when our time is up. That’s why we must be thankful for each day given to us and ensure that we lead fulfilling lives.

Like Carter and Edward, figure out what will make you happy and make your own bucket list. That will serve as your guide if you are really living life to the fullest.

If there’s something you’ve always wanted to do, go ahead and do it! Don’t just wait for someday to come before you accomplish the things you desire. Instead, start creating memories now that you can hold onto forever.

Squeeze everything out of life because you’ll never know when it’ll be too late. Keep doing things that give you delight and enjoy yourself to the fullest. With that, you will have nothing to regret when your time is over since you already did the things you want.

Hopefully, this collection was able to encourage you to make your own bucket list and cross it out with a smile. Let happiness be a regular part of your life!