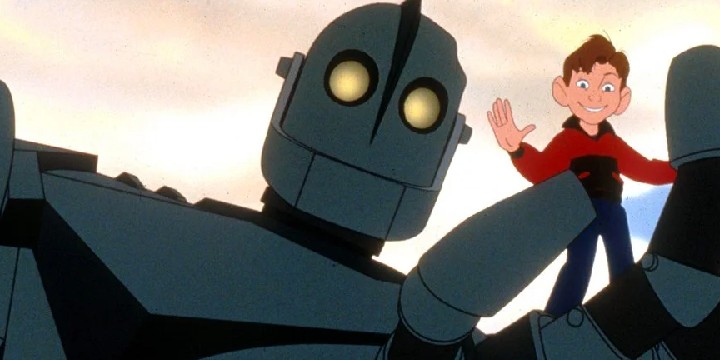 This list of our favorite The Iron Giant quotes will make you appreciate animated movies even more!

In this science fiction movie set in 1957, a giant alien robot crash-lands in a small town in Rockwell, Maine. Hogarth, a 9-year-old boy, explores the area the following night and discovers this giant iron robot.

He sees him attempting to eat the transmission lines of an electrical substation and saves him from electrocution. This became the start of their extraordinary friendship. But, how do you keep your friendship with a 50-foot-tall giant a secret when the military seeks to destroy it?

The Iron Giant tells us a lot about friendship and how it contributes to our identity. After all, our friends influence the way we think and feel about ourselves. Learn more about the movie through this collection!

And make sure to read these How to Train Your Dragon quotes and Coraline quotes.

2. “Who cares what these creeps think of you? They don’t make you what you are, you do. You are who you choose to be.” – Hogarth Hughes

3. Hogarth Hughes: “I know you feel bad about the deer. But it’s not your fault. Things die. It’s part of life. It’s bad to kill, but it’s not bad to die.”

Hogarth Hughes: “I don’t know. You’re made of metal—but you have feelings. And you think about things. And that means you have a soul, and souls don’t die.”

Hogarth Hughes: “Mom says it’s something inside of all good things—and that it goes on forever and ever.”

Hogarth Hughes: “Well—you get the idea.”

Iron Giant: “Hogarth. You stay. I go. No following.”

Hogarth Hughes: “I love you.”

6. “This is Superman. He’s a lot like you. Crash-landed on Earth, didn’t know what he was doing—but he only uses his powers for good, never for evil. Remember that.” – Hogarth Hughes

7. “The missile, when it comes down, everyone will die.” – Hogarth Hughes

Annie Hughes: “Hogarth, we’ve been through this before. No pets.”

Annie Hughes: “Hogarth, we’ve got to rent a room this year if we’re gonna make ends meet, and no one wants to live in a place with shredded upholstery.”

Hogarth Hughes: “You’ll never know he’s there. I’ll keep him in a cage.”

Kent Mansley: “No, knock yourself out, skipper.”

Hogarth Hughes: “You crumble up the chocolate into little pieces. Then you kind of just stir it into the ice cream. See?”

Kent Mansley: “Yes, I see. What do you call this again?”

10. Kent Mansley: “You’re late for dinner, Hogarth. Your mom’s working late tonight, Hogarth. So it’s just us guys. And we’re gonna have a little chat. Sit down! A little too bright? Good. Forgive me, Hogarth. I wanted you to learn something.”

Hogarth Hughes: “What can I learn from you?”

Kent Mansley: “You can learn this, Hogarth: that I can do anything I want whenever I want if I feel it’s in the people’s best interest. The giant metal man—where is it?”

Hogarth Hughes: “I don’t know what you’re talking about.”

Kent Mansley: “You don’t? Well—does this ring a bell? No? How about this? You’ve been careless, Hogarth.”

Hogarth Hughes: “It doesn’t prove anything!”

Kent Mansley: “It’s enough to get the army here with one phone call.”

Hogarth Hughes: “Then what’s stopping you?”

Kent Mansley: “Where’s the giant?! You can’t protect him, Hogarth—any more than you can protect your mother.”

Kent Mansley: “It’s difficult to raise a boy all alone. We can make it more difficult. In fact, we can make it so difficult that it would be irresponsible for us to leave you in her care. And all of that implies—you’ll be taken away from her, Hogarth.”

Hogarth Hughes: “You can’t do that!”

Kent Mansley: “The junkyard. Of course! Food for the metal eater. I wouldn’t worry about this, Hogarth. It isn’t really happening. This is only—a bad dream.”

Dean McCoppin: “You mean, you know about that?”

12. “He’s a piece of hardware, Hogarth. Why did you think the army was here? He’s a weapon, a big—big gun that walks.” – Dean McCoppin

The Iron Giant Quotes That Are Full of Humor

14. “There are two kinds of metal in this yard: scrap and art. If you gotta eat one of them, eat the scrap. What you currently have in your mouth—is art!” – Dean McCoppin

Kent Mansley: “Hogarth? That’s an embarrassing name. They might as well call him Zeppo or something. What kind of sick person would name a kid Hogar—? Hog Hug. Hog Hug? Hogarth Hughes!”

Hogarth Hughes: “Kent Mansley. You work for the government.”

Kent Mansley: “I wasn’t gonna say that. I have something for you, Hogarth.”

Annie Hughes: “Your BB gun. Where did you find that?”

Kent Mansley: “Up at the power station.”

Annie Hughes: “Hogarth was out there the other night.”

17. General Rogard: “You’ll be chief inspector of subway toilets by the time I’m finished with you! Now pack up. I’ll expect you back in Washington to clear out your office.”

18. General Rogard: “That missile is targeted to the Giant’s current position! Where’s the Giant, Mansley?!”

Kent Mansley: “Ooh—We can duck and cover! There’s a fallout shelter right there—.”

General Rogard: “There’s no way to survive this, you idiot!”

Kent Mansley: “You mean we’re all going to—.”

General Rogard: “To die, Mansley. For our country.”

General Rogard: “Hold him, men, make sure he stays there. Like a good soldier.”

Dean McCoppin: “I don’t know. This is espresso, you know? It’s like coffee-zilla.”

Man: “You’re right in the middle of the road!”

Hogarth Hughes: “Oh, my God! Uhh, oh my God we, uh—thank you for the—food that mom has put in front of us and—stop! Uh, uh—the devil! From doing bad things. And uh—get out of here! Uh—Satan? Go! Go—so that we may live in peace. Amen.”

24. “Wow, my own giant robot, I am now the luckiest kid in America!” – Hogarth Hughes

25. “You know, this sort of thing is why it’s so important to really chew your food.” – Kent Mansley

26. Hogarth Hughes: “So she moved me up a grade because I wasn’t fitting in, so now I’m even more not fitting in. I was getting good grades, you know, like all A’s. So my mom says, ‘you need stimulation’ and I go, ‘No, I’m stimulated enough right now.’”

Dean McCoppin: “That’s for sure.”

Hogarth Hughes: “So she says, ‘Uh-uh. You don’t have a challenge. You need a challenge.’ So now I’m challenged, all right. I’m challenged enough to hold on to my lunch money because all the big mooses want to pound me because I’m a shrimpy dork who thinks he’s smarter than them. But I don’t think I’m really smarter, I just do the stupid homework. If everyone else just did the stupid homework, they could move up a grade and get pounded too. Is there any more coffee?”

27. Annie Hughes: “For some reason, the army is in our front yard, Mr. Mansley.”

Dean McCoppin: “Little—yeah—wait a minute. You can talk to him?”

Hogarth Hughes: “Kinda. He can’t say a lot of words yet, but he understands things pretty good.”

Hogarth Hughes: “He needs food and shelter. You got plenty of room here. This place is perfect!”

Hogarth Hughes: “I can have him push the door down. You know I can!”

Hogarth Hughes: “Him, not it.”

Dean McCoppin: “Whatever. You don’t even know where he came from or what the hell he is!”

Dean McCoppin: “Yeah, yeah. What am I? Am I your friend? Bring some Franken-bot with out-of-state plates over here and make me change my tune. I don’t like that jazz. God, I’m tired.”

General Rogard: “And you saw this happen?”

General Rogard: “So you don’t have any evidence?”

Kent Mansley: “But sir, I’ve got an eyewitness.”

General Rogard: “An eyewitness with a concussion.”

Kent Mansley: “Sir, this thing—this thing is a menace. It tore up a power station. And caused a train wreck!”

General Rogard: “What did? Tell me again, Mansley, and this time, listen to yourself.”

Kent Mansley: “A giant—metal—monster. Please, sir. I’ve got a feeling about this one.”

General Rogard: “That’s lovely, Kent. But let me try to explain how this works: If you told me you found, say—ah, a giant footprint, I might send over an expert to make a plaster cast of it. Hell, you get me a photograph of this thing and I could probably get some troops over there! But you tell me you have a feeling—.”

Kent Mansley: “All right, then fine. You want evidence? I’ll get you evidence. And when I do, I’m gonna want a memo distributed.”

30. Kent Mansley: “Frankly, I’m not entitled to reveal the specifics of the division I work for, and all of that implies—.”

Marv Loach: “Do you mean—national security?”

Kent Mansley: “Let’s put it this way. Every once in a while, things happen that just can’t be rationalized in a conventional way. But the people want to know that their government has a response. I am that response.”

How Did Your Friends Influence Your Worldview?

In the movie, the origin of the giant robot is unknown. This could be why the government sees him as a machine built for war that must be destroyed. Hogarth, on the other hand, compares him to Superman.

At the end of the story, the iron giant that everyone was afraid of caught a missile to save Hogarth and the town. This heroic act proves that he didn’t let other people’s judgment define who he was. Because of his one true friend, Hogarth, the giant overcame all the judgment he was given.

People always have a lot to say about others. But, these words don’t mean anything until you let them affect you and how you live your life. It helps a lot, too, if you have faithful friends who stick with you no matter what!

We hope you were inspired by this list of quotes we’ve created. May this serve as a reminder that you have the ability to create your destiny. As Hogarth said, “You are who you choose to be!”