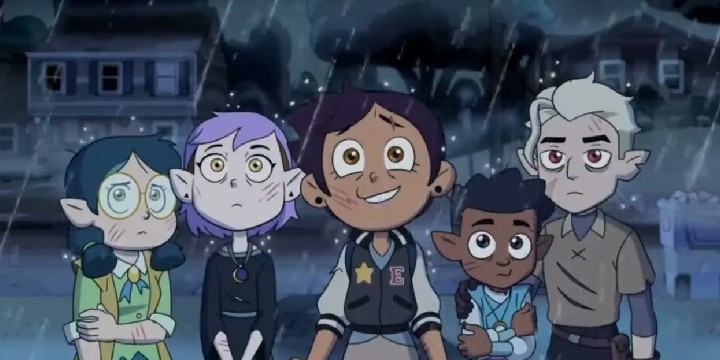 Join Luz as she travels to a mystical land filled with magic, unexpected twists, and life-changing lessons by reading this list of the best The Owl House quotes.

The Owl House is a masterpiece that allows its viewers to reflect on their emotions, whether good or bad. It delves into deep topics such as vulnerability, openness, and facing the consequences of one’s actions.

However, to balance everything out, The Owl House also has many adorable characters you cannot help but fall in love with. You’ll meet Luz, Eda, King, and more in this animated series. They are all so different that we’re sure you’ll learn something from their unique points of view and personalities.

Read on and find the best of the best The Owl House quotes. Make sure you list down some lines that struck your heart and soul!

And don’t forget to check out these Courage the Cowardly Dog quotes and Regular Show quotes.

1. “Because us weirdos have to stick together. And nobody should be punished for who they are!” – Luz Noceda

3. “Look, kid, everyone wants to believe they’re chosen. But if we all waited around for a prophecy to make us special, we’d die waiting. And that’s why you need to choose yourself.” – Eda Clawthorne

8. “How pathetic you are, that you can’t best me at my worst.” – Eda Clawthorne

9. “I will be haunted by my actions forever, hoot hoot!” – Hooty

10. Raine Whispers: “You know I hate these things. Talking to people. Waving to people. People. But I’m just happy to do my part.”

Kikimora: “You seem so much more calm than before.”

11. “Whew! Okay, finally. Got Puddles down for her nap. Now I’m only scarred emotionally.” – Viney

14. “I know she pushed you guys, and she always gets in over her head. She can be so stupid! Which I love—I mean hate! In any case, she needs you right now. Which is sweet. I mean, I hate it! And it’s dumb!” – Amity Blight

15. “Me, on a team—with you? Running around in cute uniforms—sweating? I gotta go!” – Amity Blight

16. “How about this black shadow box that reflects only sadness?” – Eda Clawthorne

17. “Wait. These aren’t crimes. None of you actually did anything wrong. You’re all just a bunch of weirdos. Like me.” – Luz Noceda

Luz Noceda: “Apparently there’s an infestation of pixies at Hexside, so school’s been canceled.”

Luz Noceda: “Wah-ah! Oh, no, no, no, no! What’s going on? Oh, hello, little fairy. Are you going to tell me this is all a fantastical dream?”

Fairy: “Give me your skin!”

Wise The Owl House Quotes to Learn From

20. “I grew up thinking everything was an opportunity to justify existing, but there are people out there who won’t make you feel worthless. You just have to let yourself meet them.” – Amity Blight

21. “It’s not fair that they’re all in here. They just want to be themselves. Why does everyone think that being a weirdo is so bad?” – Luz Noceda

22. “You are talented. You are a star. You may be hated, so long as you are feared. Most important of all, you are a winner.” – Boscha

24. “Humans have no magical ability. But I doubt that’ll stop you.” – Amity Blight

25. “Not judging a book by its cover is a baby rule even babies know.” – Luz Noceda

What Do You Think Makes The Owl House So Unique?

In The Owl House, Luz is a passionate and inspiring young girl who ventures into an unknown world. Most would have already quivered with fear if they’d come face to face with witches, demons, and other supernatural beings. But, not Luz.

Instead, she befriends Eda and King. She’s outgoing, quirky, and unafraid to love and show her true self to the world. Luz brings out the best in everyone, even when others think so lowly of themselves.

Through her and her friendship with Eda and King, the show opens up topics on vulnerability and acceptance. Imagine how hard it is to be honest with yourself. That’ll already be difficult, and we can’t even fathom how challenging it’ll be to open ourselves up to others.

Aside from learning from Luz and her friends, The Owl House also takes us on an exciting adventure by traversing through the Boiling Isles. It’s such a new and exciting world and exploring it makes viewers anticipate every episode. Indeed, this series allows us to expand our imaginations and broaden our horizons.

With that, we hope these quotes from The Owl House were able to take you to a whole new world. Keep the lessons you’ve learned from Luz in your heart, and use them whenever you need advice!