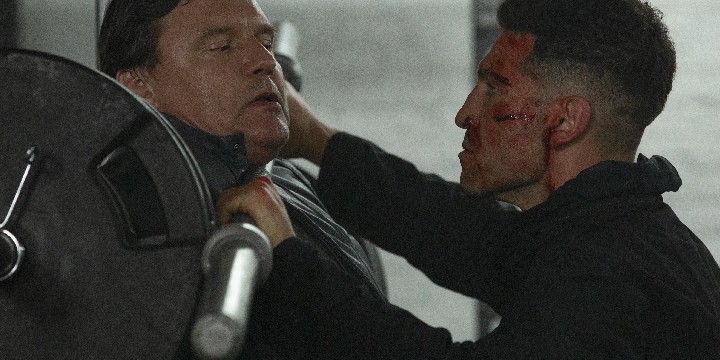 If you want some action paired with a story of love and loss, then these The Punisher quotes are for you.

The Punisher is a series about a Marvel antihero of the same name. The story revolves around Frank Castle, an Italian-American vigilante, and U.S. Marine Corps Scout veteran, who made it his mission to kill as many criminals as possible. He is skilled with arm-to-arm combat, specialized firearms, and trained for high military intelligence.

Although he may be seen as a ruthless and violent killer in the series, his intentions are good and driven by love. He knows what it’s like to suffer from grief and loss, which motivates him to keep fighting in life.

There is a lot to learn from these quotes that will inspire you and change your perspective about heroes. So, hurry up and make sure you don’t miss out on this fantastic list. Keep reading below to know more about our favorite antihero.

And don’t forget to check out these The Flash quotes and Daredevil quotes.

1. “If we can’t find the best in others, how can we hope to find it in ourselves?” – Krista Dumont

3. “How we deal with disappointments is what decides the person we are.” – Farah Madani

4. “You have to do whatever it takes to take care of the people you love.” – David Lieberman

5. “You make a choice. You live with the consequences.” – Frank Castle

8. “We are all lonely. I sometimes think that that is all that life is. We’re just fighting not to be alone.” – Karen Page

10. “Sometimes, I think the only way to get by in this world is to step off it for a while.” – Billy Russo

11. “Just because someone says something is true doesn’t mean that it is. Even if you wanna believe them, even if you keep believing them, even if they believe it themselves. In the end, you just have to admit that they’re lying and change your own path ’cause people never change. They just hide stuff from you and let you down. Over and over again. Plenty of kids learn that at a young age. And so you have to decide, do I stay or do I change the path for myself?” – Amy Bendix

12. “If you beat a dog long enough, it goes crazy. Doesn’t matter how good it was before. After that happens, the dog that you knew is never coming back.” – Billy Russo

Powerful The Punisher Quotes That Will Move You

14. “When we first started this, it wasn’t about the dead, it was about the living.” – David Lieberman

15. “You live with pain long enough, you start to miss it when it’s gone.” – Krista Dumont

16. “It doesn’t matter what you did. It doesn’t change how I feel about you.” – Karen Page

17. “All the things that I’d done, memories, they never hurt me. The past is more than memories. It’s the devil you sold your soul to.” – Frank Castle

18. “There are worse things than dying, Bill. I wake up most mornings, and I want it. I hope for it.” – Frank Castle

20. “Believe it or not, I actually care what happens to you, which makes precisely one of us.” – Karen Page

21. “The only way out is to find something that you care about.” – Frank Castle

22. “Take away the one thing he has left. The idea that he is somehow better than you.” – Krista Dumont

The Punisher Quotes to Revisit the Show’s Emotional Scenes

26. “Okay, John. Here’s the thing. That kid right there, the one whose head you got that gun on, you see, I’d do anything for her. Anything.” – Frank Castle

28. “Come on. You know you’re not the only one, right? Who did you lose? Huh? Was it someone you loved? Well, boo-hoo. Let me tell you something, buddy. Everybody’s lost someone. Doesn’t mean you have to do this.” – Matt Murdock

29. “Look, I know you, all right? You’re brave. You’re strong, all right. But you are so goddamn stubborn, and you will throw everything away for me, and I cannot let that happen, all right?” – Frank Castle

30. “You would rather be dead than feeling? Frank Castle, the Punisher, on a suicide mission because, what, he doesn’t like when, uh, he gets his feelings hurt?” – David Lieberman

31. “You sold out everything you ever stood for, anyone you ever cared about, and you did it for money and status. Left Frank for dead, covered in the blood of his wife and children. That’s who you are.” – Dinah Madani

32. “I just wanted to be with them. But that day, we went to that park, and the kids were too old for that stupid carousel, but that day, they just laughed, you know? They were laughing. We were all laughing like idiots. And that laughter, it stuck with me, you know? After I lost them, it would just, it would echo, you know? It was over and over. And it wasn’t just in my dreams. It was, like, it was in my heart, you know? And I just, I wanted to hold onto it. I wanted to live in it and just hear that laughter, but the thing is, I can’t hear it anymore. It’s all I had. It’s gone.” – Frank Castle

33. “Maybe not. We don’t get to pick the things that fix us, Red. Make us whole. Make us feel purpose. My moment of clarity? It came from the strangest of places.” – Frank Castle

34. “It’s not that I didn’t know. I didn’t care. I didn’t care. Right then, I would’ve killed anything that got in my way. You know what that means, right? Now, I’m the monster. Yeah. If any of those pieces of shit that I killed, if they deserved to die, so do I.” – Frank Castle

35. “How much longer before innocent people start getting caught in his crossfire?” – Matt Murdock

36. “Yeah, it was like the tougher you acted, the more scared you looked.” – Frank Castle

37. “Well, it’s meant as an admonition to value your life, to live it well.” – David Lieberman

38. “There’s nothing like a nice smile to let them know you give a shit.” – Billy Russo

39. “Happy is a kick in the balls waiting to happen.” – Frank Castle

Meaningful The Punisher Quotes to Think About

40. “Soldiers can’t question legality or morality at the moment. That’s a way to get yourself killed.” – Billy Russo

41. “There are people out there who think I’m a monster. That I feed on the blood and the violence, they have it half right. I am a monster, but I don’t feel a thing. It’s my job. The role I’ve been given. The boogeyman.” – Frank Castle

42. “Pain, you can get used to pain, Lieberman. You can adjust to it. You can adjust to pretty much anything. Just as long as there’s routine, right? Routine. The human mind, it craves it, needs it. But if you take that away, that’s when you start to lose your shit. When you take away day and night and food. No water, no patterns.” – Frank Castle

43. “In certain extreme situations, the law is inadequate. In order to shame its inadequacy, it is necessary to act outside the law to pursue a natural justice. This is not vengeance. Revenge is not a valid motive. It’s an emotional response. No, not vengeance, punishment.” – Frank Castle

Badass The Punisher Quotes That Are Packed With Action

44. “You know, I remember. I remember killing every one of ’em, Curtis. You know, just, they’re dead. Sometimes, I think that’s all I got. Just me and the ghosts.” – Frank Castle

45. “I’m not the one that dies, kid. I’m the one that does the killing. The thing is, every time I try to be someone different, that’s when the wrong people get hurt.” – Frank Castle

46. “Remember it’s ruin to run from a fight, so take open order, lie down and sit tight, and wait for support like a soldier. Wait, wait, wait like a soldier.” – Lewis Wilson

47. “You decide someone deserves to be gone, and bang, they’re gone. No second thoughts, no qualms, no conscience, and then on you go, happy and safe on your, I guess, at least borderline psychopathic, merry way.” – Dinah Madani

48. “I need to take care of the scum that killed my family.” – Frank Castle

How Do You Turn Your Bad Experiences Into an Inspiration to Do Better?

In life, there will be good and bad chapters. The peaceful and happy moments we have will help us through the worst experiences. But, this doesn’t mean that the dark parts of our lives are just there to make us suffer and feel sad.

Like the Punisher, sometimes, the worst memories of our past are an opportunity for us to be better and do good. It is all just a matter of choice; it’s up to us to decide to walk on the path that’ll either improve or worsen us. Frank Castle reminds us that if we wallow in our own negative emotions too much, we will never move forward in life.

We must indeed give ourselves time to feel and heal, but at some point, we should also stand up and walk again toward our chosen destination. So, we hope that these The Punisher quotes were able to inspire you to make a good thing out of your bad memories in the past. Make sure to apply what you’ve learned from these quotes and use them to grow and improve yourself.

Which The Punisher quote is your favorite? Did you learn a lot from the collection? Share your thoughts in the section below!