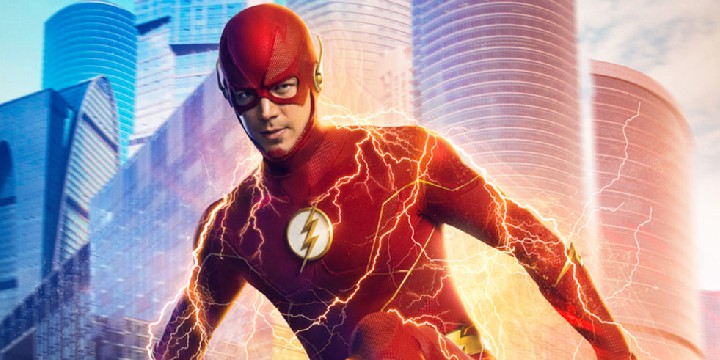 Let these The Flash quotes power you with inspiration to be brave, have hope, and face the day.

The Flash is an American TV series about a crime-fighting hero with superhuman speed. Its plot zooms in on how Barry Allen, a crime scene investigator, harnesses powers and tries to save the world from evil.

Although it is a typical jaw-dropping, action-packed show, there is a lot to learn from the lines of characters. Moreover, you will find topics you can relate to, such as regrets and relationships. So, make sure you don’t miss this gem by reading our collection of the top 30 The Flash quotes.

And don’t forget to check out these Batman quotes and Bane quotes.

1. “Life doesn’t give us a purpose. We give life purpose.” – Barry Allen

2. “It’s a scary world. People die, trusts are betrayed, things change. But change can be a good thing, you know? It can bring new experiences, new opportunities, and people. You can treat them like a potential enemy or as a new friend. Just trust that everything’s gonna be okay.” – Barry Allen

3. “The hardest thing you’re gonna have to face is not some monster out there with powers. It’s gonna be that feeling of uselessness when you can’t do anything.” – Joe West

4. “When you stop trying to force the solution, it’ll happen on its own.” – Barry Allen

5. “Living this life, it takes more than a mask. It takes discipline.” – Oliver Queen

6. “Not every hero wears a mask. Some heroes save the day in the simplest of ways. By just being there for us, or letting us know we’re believed in.” – Barry Allen

7. “Everyone secretly thinks they’ve figured out what their life is gonna be like, but what no one ever considers is that life has its own plans for you, whether you like them or not. And so you’re left with a choice. You can either embrace the change and move forward, or fight it, and be left behind.” – Barry Allen

8. “Sometimes, the only way to move forward is to revisit the things in your past that were holding you back. You have to deal with them head-on, no matter how scary they may be. Because once we do, you will see that you can go further than you ever imagined.” – Barry Allen

9. “You can’t let go of your love for somebody ’cause you’re afraid of what might happen. You gotta take the good with the bad, no matter what.” – Barry Allen

10. “For every bad memory, there is a good one that will get you through it.” – Iris West

11. “Being a superhero isn’t always about how fast you can run. It’s about helping however you can, wherever you’re needed most.” – Caitlin Snow

13. “Part of being a hero is being able to see the good in people.” – Barry Allen

14. “Every kid dreams of being a superhero, having powers, saving people. But no kid thinks about what it’s like to be a hero and not save people. Truth is, not much else changes. You still hurt, you still love, you still wish and hope and fear things, and you still need people to help you with all of it. In some ways, that’s the best part.” – Barry Allen

Meaningful The Flash Quotes to Increase Your Wisdom

16. “We can never learn to fly without crashing a few times.” – Barry Allen

17. “Ignoring the problem does not get rid of it. You have to face it.” – Cisco Ramon

19. “It doesn’t matter if you’re the slowest kid in gym class or the fastest man alive. Every one of us is running, being alive means running, running from something, running to something or someone. And no matter how fast you are, there are some things you can’t outrun. Some things always manage to catch up to you.” – Barry Allen

20. “Things aren’t always what they seem. Our fears can play tricks on us, making us afraid to change course, afraid to move on, but usually, hidden behind our fears are second chances waiting to be seized, second chances at life, at glory, at family, at love. And these opportunities don’t come around every day, so when they do, we have to be brave, take a chance, and grab them while we can.” – Barry Allen

21. “I used to think that keeping secrets from people for their own good was a noble decision, that it would protect them. But when you do that, you just rob those people from making their own decisions.” – Barry Allen

The Flash Quotes That Will Prepare You for Life

23. “Life is better if you have faith in the people around you.” – Ralph Dibny

24. “Life is locomotion. If you’re not moving, you’re not living. But there comes a time when you’ve got to stop running away from things, and you’ve got to start running towards something. You’ve got to forge ahead. Keep moving, even if your path isn’t lit. Trust that you’ll find your way.” – Barry Allen

25. “Sometimes, in life, all we can do is just live with the consequences.” – Barry Allen

26. “Sometimes, great possibilities are right in front of us, but we don’t see them because we choose not to. I think that we need to be open to exploring something new.” – Barry Allen

27. “Not every friendship is meant to last a lifetime. What does last forever is the pain when that person is gone.” – Barry Allen

28. “A little fear can be a healthy thing. It helps you determine which risks are worth taking.” – Iris West

29. “I thought being the fastest man alive would make my life easier, that I could outrun anything. Turns out, no one can outrun pain.” – Barry Allen

30. “There are only four rules you need to remember: make the plan, execute the plan, expect the plan to go off the rails, throw away the plan. Follow my lead, and you’ll be fine.” – Leonard Snart

Did These The Flash Quotes Inspire You to Do Your Best to Fight in Life?

If there’s one thing we should learn from The Flash, it is that we should keep going and trust ourselves and whatever will happen. Life will always throw us hardships and knock us down, but we also have the power to stand up and never back down.

Let The Flash remind you that even if you don’t have superpowers, you still have the strength inside you to make things happen. Remember that you are the only person who controls your fate and future. So, always do your best and continue to move forward in life.

We hope these quotes were able to help you collect your thoughts and prepare you for the future. Like The Flash, use your strengths and continue making changes for a better world for yourself and others.

Are you a DC Comics fan? Have you watched The Flash? Comment down below.