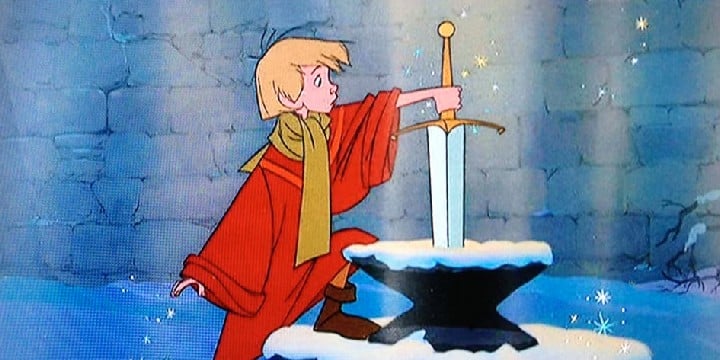 These The Sword in the Stone quotes will make you reflect and rethink your values.

We’ve all heard about the legends of King Arthur. But, perhaps one of the most popular adaptations of this tale is Disney’s The Sword in the Stone, based on T.H. White’s novel.

In the movie, the former King of England dies with no heir. This would have caused a country disorder, but unexpectedly, a mysterious sword appeared embedded in stone. There was an inscription on the rock that whoever could remove the blade would be the new King of England.

Many tried to do so, but no one succeeded. That is, no one but Arthur. He successfully removed the sword without effort.

Arthur was destined to become the new King of England, and he fulfilled the prophecy by pulling out the sword. If you’re curious about what transpired in the movie or Arthur himself, read on. We’ve gathered the best quotes from The Sword in the Stone.

And make sure to check out these Horton Hears a Who! quotes and Grinch quotes.

Best The Sword in the Stone Quotes

1. Merlin: “Ah, you know, lad, that love business is a powerful thing.”

2. Merlin: “Don’t—don’t you get any foolish ideas that magic will solve all your problems because it won’t.”

Arthur: “But sir, I don’t have any problems.”

Merlin: “Oh, bah! Everybody’s got problems. The world is full of problems.”

3. “You can’t grow up without a decent education, you know.” – Merlin

5. “For every to, there is a fro; for every stop there is a go, and that’s what makes the world go round.” – Arthur

6. Merlin: “Don’t take gravity too lightly or it’ll catch up with you.”

Merlin: “Gravity is what causes you to fall.”

Merlin: “Yes, it’s like a stumble or a—no, no, no. It’s the force that pulls you downward, the phenomenon that any two material particles or bodies, if free to move, will be accelerated toward each other.”

7. “A dark age, indeed. Age of inconvenience—no plumbing, no electricity, no nothing.” – Merlin

8. “Flying is not merely some crude, mechanical process. It is a delicate art. Purely aesthetic. Poetry of motion. And the best way to learn it is to do it.” – Archimedes

Merlin: “No one will know the difference, son. Who cares as long as the work gets done?”

10. Archimedes: “If the boy goes about saying the world is round, they’ll take him for a lunatic.”

Arthur: “The world is round?”

Arthur: “You mean it’ll be round someday.”

Merlin: “No, no, no. It’s round now. Man will discover this in centuries to come. And he will also find that the world is merely a tiny speck in the universe.”

Archimedes: “Ah! You’re only confusing the boy. Before you’re through, he’ll be so mixed up, he’ll—he’ll be wearing his shoes on his head!”

12. “And below the hilt, in letters of gold, ‘Whoso pulleth out this sword from this stone and anvil is rightwise king, born of England.’ Though many tried for the sword with all their strength, none could move the sword. So the miracle had not worked. And in time, the marvelous sword was forgotten. This was a Dark Age, without law, and without order. The strong preyed upon the weak.” – Narrator

Archimedes: “Rules, indeed. Why, she only wants rules so she can break ’em.”

14. Merlin: “Why, they might even make a motion picture about you.”

15. “Sounds like someone’s sick. How lovely. I do hope it’s serious. Something dreadful.” – Mad Madam Mim

The Sword in the Stone Quotes to Embed in Your Memories

Archimedes: “Who knows? Who knows anything?”

17. “It would have worked if it weren’t for this infernal beard.” – Merlin

19. Arthur: “You mean you can see everything before it happens?”

Merlin: “Uh, no, no. Not everything. I—uh—I admit I didn’t know whom to expect for tea.”

20. Merlin: “When he stays out all night, he’s always grumpy the next morning.”

Arthur: “Then he must stay out every night.”

21. Merlin: “Madam, I have not disappeared. I’m very tiny. I am a germ. A rare disease. I am called malignalitaloptereosis, and you caught me, Mim!”

23. “Power is of the individual mind, but the mind’s power alone is not enough. The power of strength decides everything in the end, and only might is right.” – T.H. White, Author

24. “Perhaps he does not want to be friends with you until he knows what you are like. With owls, it is never easy-come-easy-go.” – T.H. White, Author

25. “The best thing for disturbances of the spirit is to learn. That is the only thing that never fails. You may grow old and trembling in your anatomies, you may lie awake at night listening to the disorder of your veins, you may miss your only love and lose your money to a monster, you may see the world about you devastated by evil lunatics, or know your honor trampled in the sewers of baser minds. There is only one thing for it then—to learn. Learn why the world wags and what wags it. That is the only thing which the poor mind can never exhaust, never alienate, never be tortured by, never fear or distrust, and never dream of regretting.” – T.H. White, Author

Do You Think Arthur Deserved to Be the King of England?

More than just being a legend, The Sword in the Stone allows us to see the value of having good education as a young child. In the movie, Merlin takes it upon himself to be Arthur’s tutor. Through his wisdom, Arthur gained vast knowledge that would help him serve his country in the future.

Merlin turned Arthur into different kinds of animals to teach him lessons on love and knowledge. These would later help him become a great leader and a good person. With these values in his arsenal, Arthur slowly came closer to who he was meant to be—his destiny.

In life, we are bound to face countless challenges that might seem too big for us to handle. However, if we are given similar values as Arthur’s as a foundation, we’ll be able to adapt—no matter what obstacle awaits.

So, instead of agonizing over what you can’t control, go above and beyond to focus and improve on what you can. Educate yourself, experience things outside your comfort zone, and strive to become the best you can be!