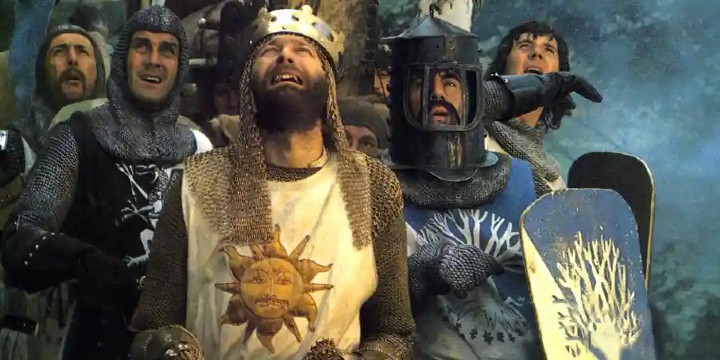 If you’re in need of a good laugh, then join us as we revisit some of the silliest Monty Python and the Holy Grail quotes.

Monty Python and the Holy Grail is a movie that’ll make you forget about logic. It’s masterfully written to bewitch every viewer with its exceptional wit and humor.

The movie takes us back to the time when King Arthur and his knights were sent to find the Holy Grail.

They’ll encounter many fascinating and unique people throughout their journey.

But, even though some of these characters are only given a couple of minutes of screen time, they leave a long-lasting impression that’ll be etched in your mind.

With all the memorable lines and puns packed within the storyline, there’s no doubt how this movie came to be a cult favorite.

So, if you’re curious about it, make sure you read through the entire list.

And don’t forget to check out these Indiana Jones quotes and The Goonies quotes.

2. “Please! This is supposed to be a happy occasion. Let’s not bicker and argue over who killed who.” – King of Swamp Castle

3. “Listen, strange women lyin’ in ponds distributin’ swords is no system for a basis of government. Supreme executive power derives from a mandate from the masses, not from some farcical aquatic ceremony.” – Dennis

4. “Don’t like her? What’s wrong with her? She’s beautiful. She’s rich. She’s got huge—tracts of land” – King of Swamp Castle

5. “Bones of full 50 men lie strewn about its lair. So, brave knights, if you do doubt your courage or your strength, come no further, for death awaits you all with nasty, big, pointy teeth.” – Tim the Enchanter

7. “What manner of man are you, that can summon fire without flint or tinder?” – King Arthur

9. “O Knights of Ni, you are just and fair, and we will return with a shrubbery.” – King Arthur

10. “Stop. Who would cross the Bridge of Death must answer me these questions three, ere the other side he see.” – Bridgekeeper

11. “It is I, Arthur, son of Uther Pendragon, from the castle of Camelot. King of the Britons, defeater of the Saxons, sovereign of all England!” – King Arthur

12. “We dine well here in Camelot. We eat ham and jam and Spam a lot.” – Knights of Camelot

14. “You don’t frighten us, English pig-dogs! Go and boil your bottoms, you sons of a silly person! I blow my nose at you, so-called ‘Arthur King,’ you and all your silly English Knights.” – French Soldier

15. “What do you mean, an African or European swallow?” – King Arthur

17. “Oh, but you can’t expect to wield supreme executive power just because some watery tart threw a sword at you.” – Dennis

18. “You must cut down the mightiest tree in the forest—with—a herring!” – Knight

19. “Are you suggesting coconuts migrate?” – Soldier

Peasant 3: “Because they’re made of—wood?”

Sir Bedevere: “Good. So how do you tell whether she is made of wood?”

21. “I don’t want to talk to you no more, you empty-headed animal food trough wiper. I fart in your general direction. Your mother was a hamster and your father smelt of elderberries.” – French Soldier

Black Knight: “’Tis but a scratch.”

King Arthur: “A scratch? Your arm’s off!”

24. “No chance, English bedwetting types! I burst my pimples at you and call your door-opening request a silly thing, you tiny-brained wipers of other people’s bottoms!” – French Soldier

Herbert: “What, the curtains?”

27. French Soldier: “I’m French. Why do you think I have this outrageous accent, you silly king?”

Sir Galahad: “What are you doing in England?”

French Soldier: “Mind your own business.”

28. “Bravely taking to his feet, he beat a very brave retreat. A brave retreat by brave Sir Robin.” – Minstrel

30. “Oh, wicked, bad, naughty Zoot! She has been setting light to our beacon. Which I’ve just remembered, is grail-shaped. It’s not the first time we’ve had this problem.” – Dingo

Man Carrying a Body: “Here’s one.”

32. “Come and see the violence inherent in the system. Help! Help! I’m being repressed!” – Dennis

Peasant Woman: “Well, I didn’t vote for you.”

34. “Oh, king eh? Very nice. And how’d you got that, eh? By exploiting the workers. By hanging on to outdated imperialist dogma which perpetuates the economic and social differences in our society.” – Dennis

35. “The Lady of the Lake, her arm clad in the purest shimmering samite held aloft Excalibur from the bosom of the water, signifying by divine providence that I, Arthur, was to carry Excalibur. That is why I am your king.” – King Arthur

36. “You’re foolin’ yourself! We’re living in a dictatorship. A self-perpetuating autocracy in which the working class—.” – Dennis

Monty Python and the Holy Grail Quotes to Boost Your Courage

37. “Well, now, uh, Launcelot, Galahad, and I wait until nightfall, and then leap out of the rabbit, taking the French by surprise—not only by surprise but totally unarmed!” – Sir Bedevere

38. “You don’t frighten us with your silly knees-bent running around advancing behavior!” – French Soldier

39. “You must return here with a shrubbery. Or else you will never pass through these woods—alive.” – Leader of the Knights Who Say Ni

41. “Follow. But! Follow only if ye be men of valor, for the entrance to this cave is guarded by a creature so foul, so cruel that no man yet has fought with it and lived! – Tim The Enchanter

42. “I seek the bravest and the finest knights in the land who will join me in my court at Camelot.” – King Arthur

Black Knight: “I move for no man.”

45. “Arthur, King of the Britons, your Knights of the Round Table shall have a task to make them an example in these dark times.” – God

Zoot: “Yes—it’s not a very good name, is it? Oh, but we are nice, and we’ll attend to your every need.

Dennis: “Well you could say Dennis.”

King Arthur: “I didn’t know you were called Dennis.”

Dennis: “Well you didn’t bother to find out, did you?”

55. “Once the number three, being the third number, be reached, then lobbest thou thy Holy Hand Grenade of Antioch towards thy foe, who, being naughty in my sight, shall snuff it.” – Cleric

56. “Go and tell your master that we have been charged by God with a sacred quest. If he will give us food and shelter for the night he can join us in our quest for the Holy Grail.” – King Arthur

57. “And Saint Attila raised the hand grenade up on high, saying, ‘O Lord, bless this thy hand grenade, that with it thou mayst blow thine enemies to tiny bits, in thy mercy.’” – Cleric

58. “It’s not a question of where he grips it! It’s a simple question of weight ratios! A five-ounce bird could not carry a one-pound coconut.” – Soldier With a Keen Interest in Birds

59. “Listen. In order to maintain air-speed velocity, a swallow needs to beat its wings 43 times every second, right?” – Soldier With a Keen Interest in Birds

60. “This new learning amazes me, Sir Bedevere. Explain to me again how sheep’s bladders may be employed to prevent earthquakes.” – King Arthur

What’s Your Favorite Part of the Movie?

Monty Python and the Holy Grail is undoubtedly one of the funniest movies ever made. The movie may appear to be senseless for some. But, in reality, it displays some facts about medieval politics, religious beliefs, traditions, and science as well!

Strictly speaking, the Holy Grail is an important religious relic significant to Christianity. This is a sensitive topic and may be taken as an insult by the church. However, the movie managed to execute the puns flawlessly, making it impossible to be taken seriously.

This movie is made with the sole purpose of bringing pure happiness and joy to the audience. And, in these challenging times when many of us need to spend more time at home, a movie like Monty Python and the Holy Grail is essential.

Let these quotes take you away from all the logic and lead you to a land of pure entertainment! With that, we hope this collection was able to brighten your day in one way or another.