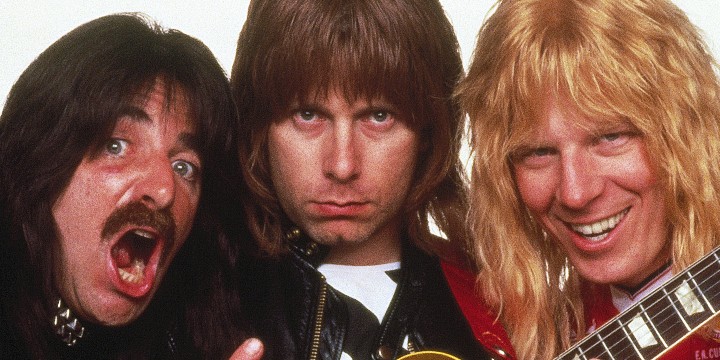 These 20 This Is Spinal Tap quotes are perfect if you enjoy watching rock-themed movies!

This Is Spinal Tap is a mockumentary movie that was released way back in 1984. The story starts with Marty Di Bergi, a filmmaker creating a documentary about the journey of a rock band called Spinal Tap.

The band consists of David, Nigel, Derek, Viv, and Mick—childhood best friends. There have been a lot of changes in the band due to former members’ bizarre and usual deaths. Despite the loss, the band still goes on and tries to achieve a significant hit in the industry.

However, their success has fluctuated due to the numerous changes that have taken place over their journey. Everything and everyone, from the band’s manager and members to its album, name, and even image, went through some sort of shift. Fortunately, they could handle these adjustments, helping them achieve their biggest breakthrough.

This Is Spinal Tap will remind us that change is inevitable, so we must cope with it. We’ve created this collection to ensure you’ll learn to accept that nothing is permanent in this world.

And don’t forget to check out these White Christmas quotes and Wayne’s World quotes.

Best This Is Spinal Tap Quotes

1. David St. Hubbins: “He died in a bizarre gardening accident—.”

Nigel Tufnel: “It was one of those things, you know. The authorities said, you know, ‘Best leave it unsolved.’”

3. “May I start by saying how thrilled we are to have you here? We are such fans of your music and all of your records. I’m not speaking of yours personally, but the whole genre of rock and roll, and so many exciting things that are happening in music today.” – Lt. Bob Hookstratten

4. “There’s something about this that’s so black; it’s like, how much more black could this be? And the answer is none. None more black.” – Nigel Tufnel

5. “We’re very lucky in the band in that we have two visionaries, David and Nigel; they’re like poets, like Shelley and Byron. They’re two distinct types of visionaries; it’s like fire and ice, basically. I feel my role in the band is to be somewhere in the middle of that, kind of like lukewarm water.” – Derek Smalls

6. “Whether or not he knows the difference between feet and inches is not my problem.” – David St. Hubbins

7. “I believe virtually everything I read, and I think that is what makes me more of a selective human than someone who doesn’t believe anything.” – David St. Hubbins

Nigel Tufnel: “Yeah, I’ve been fooling around with it for a few months.”

Marty Di Bergi: “It’s a bit of a departure from what you normally play.”

Nigel Tufnel: “It’s part of a trilogy, a musical trilogy I’m working on in D minor, which is the saddest of all keys, I find. People weep instantly when they hear it, and I don’t know why.”

Nigel Tufnel: “You know, just simple lines intertwining, you know, very much like—I’m really influenced by Mozart and Bach, and it’s sort of in between those, really. It’s like a Mach piece, really. It’s sort of—.”

Marty Di Bergi: “What do you call this?”

Marty Di Bergi: “Does that mean it’s louder? Is it any louder?”

Nigel Tufnel: “Nowhere. Exactly. What we do is, if we need that extra push over the cliff, you know what we do?”

Marty Di Bergi: “Why don’t you just make 10 louder and make 10 be the top number and make that a little louder?”

Famous This Is Spinal Tap Quotes

10. “You don’t do heavy metal in Dubly, you know.” – Jeanine Pettibone

11. Marty Di Bergi: “Do you have any sort of creed or philosophy that you live by?”

Viv Savage: “Have a good time all the time. That’s my philosophy, Marty.”

12. Nigel Tufnel: “It really puts perspective on things, though, doesn’t it?”

David St. Hubbins: “Too much. There’s too much f*cking perspective now.”

13. “Well, I don’t really think the end can be assessed, uh, as of itself as being the end because what does the end feel like? It’s like saying when you try to extrapolate the end of the universe, you say, if the universe is indeed infinite, then how—what does that mean? How far is all the way, and then if it stops, what’s stopping it, and what’s behind what’s stopping it? So, what’s the end, you know, is my question to you.” – David St. Hubbins

14. Marty Di Bergi: “What would you do if you couldn’t play music anymore?”

Mick Shrimpton: “Well, as long as there’s, you know, sex and drugs, I could do without the rock and roll.”

16. Marty Di Bergi: “And what happened to Stumpy Joe?”

Derek Smalls: “It’s not a very pleasant story. But, uh, he died. He choked on, uh, the official explanation was he choked on vomit.”

Nigel Tufnel: “It was, actually. It was actually someone else’s vomit. You know there’s no real—.”

Derek Smalls: “Well, they can’t prove whose vomit it was. They don’t have the ability. There’s no way of—.”

Mime Waiter: “I don’t know, they’re not eating it.”

Morty the Mime: “Did you do the wind?”

Morty the Mime: “No, you don’t push the wind away; the wind comes at you. Okay, change those, get the little dwarf cannolis. Come on, don’t talk back; mime is money. Come on, move it!”

Classic This Is Spinal Tap Quotes for All Rock Fans

18. “This pretentious ponderous collection of religious rock psalms is enough to prompt the question, ‘What day did the Lord create Spinal Tap, and couldn’t he have rested on that day too?” – Marty Di Bergi

19. “We’ve got Armadillos in our trousers. It’s really quite frightening.” – Nigel Tufnel

20. “Well, I’m sure I’d feel much worse if I weren’t under such heavy sedation.” – David St. Hubbins

Did This Collection Inspire You to Accept the Changes in Your Life?

This Is Spinal Tap shows us that the only thing that is constant in life is change. In the movie, the most painful and challenging change is when the band has to face losing their bandmates. Indeed, it’s hard to imagine this kind of turnover, mainly when those people help to keep their team intact.

Still, the remaining members believe that change is inevitable. No matter what, the band must play on. With this mindset, they eventually achieved success in their careers.

Like them, we should be prepared for change, as it might come when we least expect it. Our life has undergone several shifts and transformations since our birth. So, remember that change in any facet of life—physical, emotional, professional, or personal—proves that growth is only possible with one’s transformations and improvements.

Let’s all embrace the possibility of change instead of shying away from it. Without changes, there would be no progress in your life. Going with the flow of life is the only way you can survive and thrive!

We hope this collection was able to serve as a helpful reminder that some things are beyond our control. Despite that, if we accept and work with the changes in our lives, we’ll still be able to find happiness, success, and contentment! Change is a part of life; if you want to live and enjoy it, you must accept it.