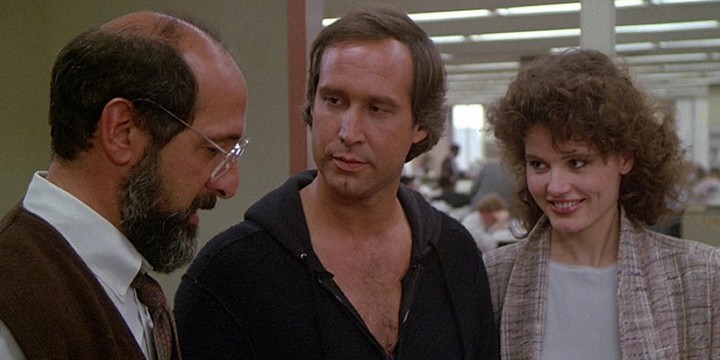 Let these Fletch quotes keep you on the edge of your seat and fill your heart with fun and entertainment!

At first, you may think that Fletch is just a typical comedy movie about being undercover, drugs, and rich peoples’ schemes.

But, in a twisted turn of events, it tells the story of a journalist trying to find answers to Alan Stanwyk—a millionaire and successful executive—wanting to die.

The movie is interesting in and of itself. However, what really makes the movie popular and hilarious is its refreshing deadpan and dry humor.

So, it’s no surprise that Fletch became a cult favorite and was included in the top-grossing domestic movies in its first year of release.

Fletch is definitely a movie worth revisiting, from its hilarious plot to its unforgettable characters and lines.

So, check out our complete collection below if you’re curious about its great jokes and puns!

And don’t miss out these Animal House quotes and Nacho Libre quotes.

4. “There has been a lot of drug smuggling on the beach lately. I have been trying to find out who’s behind it. It hasn’t been easy. I don’t shower much.” – Irwin Fletcher

5. “Well, I’m not even sure that’s a crime anymore. There’ve been a lot of changes in the law.” – Irwin Fletcher

6. “Keep 10 for yourself. Go and get yourself a nice piece of ass.” – Irwin Fletcher

7. “It was something your wife said while we were in bed together. Curiously, she said we had roughly the same build. From the waist up, I imagine.” – Irwin Fletcher

Chief Karlin: “Maybe I’m not going to keep you here. Maybe I’m going to blow your brains out.”

Irwin Fletcher: “Well, now, I’m no lawyer, but I do believe that’s a violation of my rights.”

9. “You know, if you shoot me, you’re liable to lose a lot of those humanitarian awards.” – Irwin Fletcher

Irwin Fletcher: “You don’t mean communists, do you, Sammy?”

12. “Well, the traffic was murder, you know. One of those manure spreaders jackknifed on the Santa Ana. God awful mess. You should see my shoes.” – Irwin Fletcher

13. “Can I borrow your towel? My car just hit a water buffalo.” – Irwin Fletcher

Irwin Fletcher: “No, I’m here with the Underhills.”

Waiter: “The Underhills? They are left, señor.”

Irwin Fletcher: “Oh they’ll be back. He went out for his urinalysis.”

15. “Strangers in the night, exchanging clothing, strangers in my pants.” – Irwin Fletcher

16. “Looks like you two have a lot to catch up on. We’ll just catch the last 10 minutes of Dynasty.” – Irwin Fletcher

Irwin Fletcher: “Well, I’m sure it’s not for a lack of looking.”

18. Irwin Fletcher: “Aren’t you gonna read me my rights?”

19. Pathologist: “Ever seen a spleen that large?”

Irwin Fletcher: “No, not since breakfast.”

20. “I hope there’s no one sitting next to me. See, I always fly first class, and I take up both seats. I’m in bridge construction, and these foldouts take up a tremendous amount of space!” – Irwin Fletcher

Irwin Fletcher: “I rent them. I have a lease with an option to buy.”

Irwin Fletcher: “Well, I better just take two portions of that, then.”

23. Waiter: “Would you like some drinks, señor, while you wait? I will put it on the Underhills’ bill.”

24. “Of course, you’ve got some good grillwork there to keep out the ozone. I gotta get this thing up to 95, uh, check out the fluorocarbon output.” – Irwin Fletcher

25. “I can’t figure out what I was doing in Utah this morning.” – Irwin Fletcher

26. Receptionist: “What was that name again?”

Irwin Fletcher: “Oh, yeah. I feel like a hundred dollars.”

29. “Oh. Do you have the Beatles’ White Album? Never mind, just bring me a cup of hot fat, and the head of Alfredo Garcia while you’re at it.” – Irwin Fletcher

30. Willy: “What the hell do you need ball bearings for?”

Irwin Fletcher: “Awww, come on, guys. It’s so simple. Maybe you need a refresher course. Hey, you! It’s all ball bearings nowadays. Now, you prepare that Fetzer valve with some 3-in-1 oil and some gauze pads, and I’m gonna need ’bout 10 quarts of anti-freeze, preferably Prestone. No, no, make that Quaker State.”

31. Gail Stanwyk: “Look at her! Would you look at her? She looks like a hooker! Could you love someone who looked like that?”

Irwin Fletcher: “What are you talking about? Of course not! Five, ten minutes tops, maybe.”

Irwin Fletcher: “Well, I knew that’s where my mouth would be.”

Gail Stanwyk: “Are you always this forward?”

34. Reservation Agent: “Utah. In fact, you purchased the ticket for Ms. Cavanaugh.”

Irwin Fletcher: “Doesn’t mean I want her sitting next to me, does it?”

Irwin Fletcher: “So were my parents.”

36. Alan Stanwyk: “If you reject the proposition, you keep the thousand, and your mouth shut.”

Irwin Fletcher: “Does this proposition entail my dressing up as Little Bo Peep?”

Alan Stanwyk: “It’s nothing of a sexual nature, I assure you.”

37. Alan Stanwyk: “One thousand just to listen. I don’t see how you can pass that up, mister?”

38. Doctor: “Isn’t there a children’s book about an elephant named Babar.”

40. “I didn’t want to do this, but I’m afraid I’m gonna have to pull rank on you. I’m with the mattress police. There are no tags on these mattresses.” – Irwin Fletcher

41. “Oh, you’ve remodeled the garage. Must have cost you hundreds.” – Irwin Fletcher

42. “And who would have known that the Vice President knew I was opening the door, but the Secret Service, they just, blood.” – Irwin Fletcher

43. “Ellen? Charmed. You know, for an extra grand, I’ll let you take me out to dinner.” – Irwin Fletcher

45. “Yeah, but I mean the very end when he actually died. That was extremely sudden.” – Irwin Fletcher

47. “You know, I came this close to buying this place, but then I found out that hop-along Cassidy killed himself here.” – Irwin Fletcher

50. “You know, if I had a nickel for every one of Alan’s flyboy buddies who hit on me, I’d be a rich woman.” – Gail Stanwyck

Which Fletch Quote Made You Laugh the Hardest?

Many of us know how mundane and repetitive life can be at times. We are often put into situations that bore us and make us feel that our days will never be filled with excitement.

But, we must realize that comedy is actually rooted in real-life situations happening to ordinary people. In the movie, the main character is exposed to absurd events but remains to maintain a straight expression. It’s unique, different, hilariously relatable.

These things are what made us hooked to Fletch. Watching him have these reactions are what really cracks us up and makes us think about how absurd life can be. The complexity of comedy and its elements are perfect for seeing what life is all about—appreciating the mundane things.

Which Fletch quotes and jokes are your favorites? Do you have other quotes to add? Share them with us through the comments section!