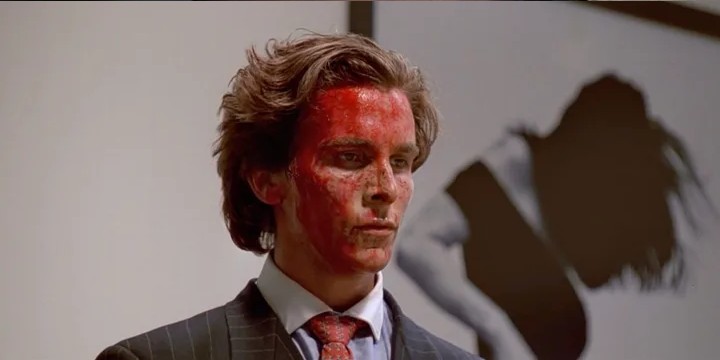 These American Psycho quotes will make your mind turn with all the witty but profound words it has to offer.

American Psycho is a comedy horror movie based on Bret Easton Ellis’ novel of the same name. It’s a social commentary on men’s sexual insecurity and obsession with materialism to mask their apathy.

This unique theme helped it rise to fame and even earned it a second movie.

Patrick Bateman is the main character in the first installment. He expresses his suppressed rage by murdering people and exhibiting very violent tendencies.

However dark American Psycho may be, there still are some witty lines that make the overall plot lighter and more enjoyable for viewers.

We’re positive that you’ll enjoy these American Psycho quotes we’ve gathered because of its fantastic mix of comedy and thrill.

Buckle up and get ready to browse through our list of quotes that you won’t want to miss!

And make sure to check out these The Silence of the Lambs quotes and Hannibal Lecter quotes.

1. “There is no way to empathize with others in the world we live in today. It’s always easier to feel empathy for ourselves instead of others.” – Patrick Bateman

2. “I have all the characteristics of a human being: blood, flesh, skin, hair; but not a single, clear, identifiable emotion, except for greed and disgust. Something horrible is happening inside of me and I don’t know why. My nightly bloodlust has overflown into my days. I feel lethal, on the verge of frenzy. I think my mask of sanity is about to slip.” – Patrick Bateman

3. “There is an idea of Patrick Bateman; some kind of abstraction. But there is no real me: only an entity, something illusory. And though I can hide my cold gaze, and you can shake my hand and feel flesh gripping yours and maybe you can even sense our lifestyles are probably comparable—I simply am not there.” – Patrick Bateman

4. “My need to engage in homicidal behavior on a massive scale cannot be corrected but, uh, I have no other way to fulfill my needs.” – Patrick Bateman

5. “My pain is constant and sharp, and I do not hope for a better world for anyone. In fact, I want my pain to be inflicted on others. I want no one to escape. But even after admitting this, there is no catharsis; my punishment continues to elude me, and I gain no deeper knowledge of myself. No new knowledge can be extracted from my telling. This confession has meant nothing.” – Patrick Bateman

6. “Look at that subtle off-white coloring. The tasteful thickness of it. Oh, my God. It even has a watermark.” – Patrick Bateman

7. “I like to dissect girls. Did you know I’m utterly insane?” – Patrick Bateman

10. “I live in the American Gardens Building on W. 81st Street on the 11th floor. My name is Patrick Bateman. I’m 27 years old. I believe in taking care of myself and a balanced diet and rigorous exercise routine.” – Patrick Bateman

12. “I don’t want you to get drunk, but that’s a very expensive glass of Chardonnay you’re not drinking there. It isn’t poisoned.” – Patrick Bateman

13. “No—I’m in touch with humanity. Evelyn, I’m sorry, I just uh—you’re not terribly important to me.” – Patrick Bateman

15. “Well, actually, that’s none of your business, Christie. But I can assure you, it certainly wasn’t cheap.” – Patrick Bateman

16. “Paul Allen has mistaken me for this d*ckhead Marcus Halberstram. It seems logical because Marcus also works at P&P and in fact, does the same exact thing I do and he also has a penchant for Valentino suits and Oliver Peoples glasses. Marcus and I even go to the same barber, although I have a slightly better haircut.” – Patrick Bateman

Patrick Bateman: “Duct tape. I need it for—taping something.”

19. “Oh, my God. Bateman, do you want me to fry you up some f*cking potato pancakes? Some latkes?” – Craig McDermott

20. “Well, for one thing, I think he was probably a closet homosexual who did a lot of cocaine. That whole Yale thing.” – Patrick Bateman

21. “I know that your friends are my friends and, uh—I’ve thought about that. You can have ’em.” – Patrick Bateman

Patrick Bateman: “Not if you want to keep your spleen.”

23. “It’s a f*cking milligram of sweetener. I want to get high off this, not sprinkle it on my f*cking oatmeal.” – Timothy Bryce

25. “Howard, it’s Bateman, Patrick Bateman. You’re my lawyer so I think you should know: I’ve killed a lot of people. I even, um—I ate some of their brains, and I tried to cook a little. I guess I’m a pretty sick guy.” – Patrick Bateman

26. “I think if you stay, something bad will happen. I think I might hurt you. You don’t want to get hurt, do you?” – Patrick Bateman

27. “You’re a f*cking ugly b*tch. I want to stab you to death, and then play around with your blood.” – Patrick Bateman

Patrick Bateman: “I guess you could say I just want to have a meaningful relationship with someone special.”

33. “I know my behavior can be—erratic sometimes.” – Patrick Bateman

34. Evelyn Williams: “You hate that job anyway. I don’t see why you just don’t quit.”

Patrick Bateman: “Because I want to fit in.”

35. “I’m at a point in my life where there seem to be so many possibilities. But I’m just so unsure.” – Patrick Bateman

37. Patrick Bateman: “When I see a pretty girl walking down the street, I think two things. One part wants me to take her out, talk to her, be real nice and sweet, and treat her right.”

David Van Patten: “And what did the other part think?”

Patrick Bateman: “What her head would look like on a stick.”

39. “We talked on the phone all the time. Don’t you recognize me? You’re my lawyer.” – Patrick Bateman

American Psycho Quotes That Are Full of Sarcastic Lines

41. “There is a moment of sheer panic when I realize that Paul’s apartment overlooks the park—and is obviously more expensive than mine.” – Patrick Bateman

42. “Davis, I’m not one to badmouth anyone. Your joke was amusing, but come on, man. You had one fatal flaw. Bateman is such a dork. Such a boring spineless lightweight.” – Harold Carnes

43. “I’m on the verge of tears by the time we arrive at Espace since I’m positive we won’t have a decent table. But we do, and relief washes over me in an awesome wave.” – Patrick Bateman

44. “I’ve seen that b*st*rd sitting in his office, talking on the phone to the CEOs, spinning a f*cking menorah.” – Craig McDermott

45. “If they have a great personality and they’re not great looking—then who f*cking cares?” – Craig McDermott

46. “Then maybe we shouldn’t go out to dinner. I wouldn’t want you to lose your willpower.” – Jean

47. “I’m trying to listen to the new Robert Palmer tape, but Evelyn, my supposed fiancee, keeps buzzing in my ear.” – Patrick Bateman

48. “Your father practically owns the company. You can do anything you like, silly.” – Evelyn Williams

49. “I’m f*cking serious. It’s f*cking over, us, this is no joke. I don’t think we should see each other anymore.” – Patrick Bateman

51. Donald Kimball: “Do you remember where you were the night of Paul’s disappearance, which was on the 20th of December?”

52. “You’re dating Luis, he’s in Arizona. You’re f*cking me and we haven’t made plans. What could you possibly be up to tonight?” – Patrick Bateman

More American Psycho Quotes for All the Fans Out There

53. “Their early work was a little too new wave for my tastes, but when Sports came out in ’83, I think they really came into their own, commercially and artistically. The whole album has a clear, crisp sound, and a new sheen of consummate professionalism that really gives the songs a big boost. He’s been compared to Elvis Costello, but I think Huey has a far more bitter, cynical sense of humor.” – Patrick Bateman

Evelyn Williams: “But where?”

Patrick Bateman: “I have to return some videotapes.”

55. “The world just opens up and swallows them.” – Patrick Bateman

56. “Try getting a reservation at Dorsia now, you f*cking stupid b*st*rd! You f*cking b*st*rd!” – Patrick Bateman

57. “Now if you said Bryce or McDermott—otherwise, it was amusing. Now if you’ll excuse me, I really must be going.” – Harold Carnes

58. “Now, John, you’ve to wear clothes in proportion to your physique. There are definite dos and don’ts, a good buddy of wearing a bold striped shirt. A bold stripe shirt calls for solid colored or discreetly patterned suits and ties.” – Patrick Bateman

59. “That’s a very fine chardonnay you’re drinking. I want you to clean your vagina.” – Patrick Bateman

Do You Think There’s a Hidden Message in American Psycho’s Plot?

Patrick Bateman is suspected of having an antisocial personality disorder or even a dissociative identity disorder. With his friendly demeanor and dead eyes, he appears to be nothing more than your usual banker. But, as you get to know him, you’ll discover that he’s a deadly serial killer.

The movie’s storytelling is tricky because audiences constantly wonder if some scenes are real or made up by Patrick’s imagination. One may think that it’s just a plain and gruesome movie. But, if we dig deeper and understand the movie’s message, we’ll find some gems to live by.

For one, American Psycho delves into the topic of obsession. An obsession with someone or something can sometimes lead to dangerous and regrettable actions. So, whenever you find yourself going down this rabbit hole, make sure to take a step back and think your actions through.

With the help of the movie, we also get introduced to mental health issues. Remember that mental health is critical, and taking care of it is essential. Reach out to family, friends, and experts whenever you think you or someone you know needs help.

We hope you were able to get to know Patrick Bateman better through this collection. Make sure to share this list with friends who are also fans of the movie!

So, which quotes are your favorites? Share them in the comments section below.