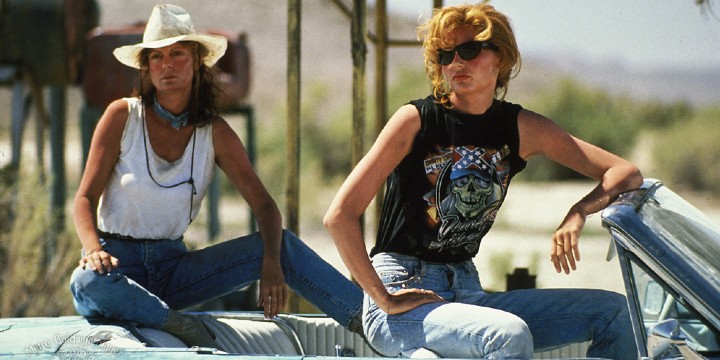 Thelma & Louise is a crime drama movie directed by Ridley Scott. Despite some controversy over portraying a negative view of men, the movie was a commercial success and garnered many nominations and awards.

In the movie, Thelma and Louise, tired of their lives in Arkansas, decide to go on a vacation together. But, along the road, they get into some pretty sticky situations.

As these two girls flee for the crimes they committed, their vacation quickly turns into a terrifying and thrilling escape from authority.

So, if you’re curious about what happened to these two best friends, keep reading our list below.

You’ll find some of the funniest and most intriguing quotes from one of the greatest movies of all time!

And make sure to check out these Taxi Driver quotes and Pulp Fiction quotes.

1. “Look, Thelma, you just gotta stop talking to people. You gotta stop being so open. We’re fugitives now, all right? Let’s start behaving like that.” – Louise

2. “Hey Louise, better slow down, I’ll just die if we get caught over a speeding ticket. Are you sure we should be driving like this, I mean in broad daylight and everything?” – Thelma

3. “In the future, when a woman is crying like that, she isn’t having any fun.” – Louise

5. “I feel really awake. I don’t recall ever feeling this awake. You know? Everything looks different now. Do you feel like that? You feel like you got something to live for now?” – Thelma

6. “You’ve always been crazy, this is just the first chance you’ve had to express yourself.” – Louise

7. “Now, I swear three days ago neither one of us would’ve ever pulled a stunt like this, but if you were ever to meet my husband, you’d understand why.” – Thelma

8. “Look, you shoot off a guy’s head with his pants down, believe me, Texas is not the place you wanna get caught.” – Louise

10. “Now if nobody loses their head, nobody will lose their head.” – Thelma

12. “You know, certain words and phrases just keep drifting through my mind. Things like incarceration, cavity search, death by electrocution, life imprisonment, sh*t like that. You know what I’m sayin’? So do I want to come out alive? I don’t know. I—I don’t know. I think we’re gonna have to think about that.” – Louise

Louise: “What in the hell did you bring that for?”

Thelma: “Oh, come on! Psycho killers, or bears or snakes? I just don’t know how to use it. Will you take care of it?”

16. Thelma: “Well, look, everything that we got to lose is gone anyway.”

Louise: “Oh, God, how do you stay so positive?”

Louise: “What’re you talking about?”

18. Louise: “Thelma, you know how I feel about Texas. We’re not going that way.”

Thelma: “Yeah, I know, Louise, but we’re running for our lives. I mean, can’t you make an exception. I mean, look at the map! The only thing between Oklahoma and Mexico is Texas! Look.”

Thelma: “Well, we needed the money.”

Louise: “Guess you could call it that, my eyes are open.”

21. Louise: “Tell him I’m having a nervous breakdown.”

Thelma: “That doesn’t carry much weight with Darryl. He already thinks you’re out of your mind.”

Thelma: “Maybe. Maybe. The call of the wild!”

Louise: “You are disturbed!”

23. “You said you and I were gonna get outta town and, for once, just really let our hair down. Well, darlin’, look out, ’cause my hair is comin’ down!” – Thelma

26. “What’re we gonna say about the robbery? There’s no excuse for that. There’s no such thing as justifiable robbery.” – Louise

27. “Ladies and gentlemen, I want to thank you all for your cooperation. Now, stay down on the floor ’til I’m gone, and have a good day.” – Thelma

28. “No we shouldn’t, but I want to put some distance between us and the scene of our last god damned crime!” – Louise

Thelma & Louise Quotes to Provoke You

30. “Where do you get off behaving that way with women you don’t even know, huh? How’d you feel if someone did that to your mother or your sister or your wife?” – Louise

31. “I think I f*cked up. I think I got us in a situation where we both could get killed. Damn, I don’t know why I just didn’t go to the police right away.” – Louise

33. “You mean you haven’t asked him, yet? Thelma, for Christ’s sake! Is he your husband or your father? It is just two days, for God’s sake. Don’t be a child. Tell him you’re going with me.” – Louise

34. “That guy was hurting me. If you hadn’t come out when you did, he would’ve hurt me a lot worse. And probably nothing would’ve happened to him ’cause everybody did see me dancin’ with him all night. They would’ve made out like I’d asked for it. My life would’ve been ruined a whole lot worse than it is now. At least now I’m havin’ some fun. And I’m not sorry that son of a b*tch is dead. I’m just sorry it was you that did it and not me.” – Thelma

35. “So, tell me something, Miss Thelma. How is it you ain’t got any kids? I mean, God gives you something special, I think you oughta pass it on.” – J.D.

37. Max: “You know, the one thing I can’t figure out is whether these girls are real smart or just real, real lucky?”

Hal: “Don’t matter. Brains will only get you so far and luck always runs out.”

Thelma: “You do? Well, you’re lucky. You’ll be sweet to ’em, especially your wife. My husband wasn’t sweet to me. Look how I turned out.”

39. “If she calls, just be gentle, you know? Like you’re really happy to hear from her. Like you miss her. Women love that sh*t.” – Max

41. “Try not to get too excited, Louise. I just flew across two states with that ring in my f*ckin’ hand, and uh—you know I hate to fly.” – Jimmy

Thelma & Louise for Fans of the Movie

43. “I guess everything from here on in is going to be pretty sh*tty.” – Thelma

47. “Don’t be fooled, he’s no different than any other guy. He knows how to chase and that’s it. Once he’s caught you, he doesn’t know what to do. So he runs away.” – Louise

50. “I guess I always thought the worst thing that could happen would be to end up old and alone in some crummy apartment with one of those little dogs.” – Thelma

51. Louise: “Tell him you’re having a wonderful time and you’ll be home tomorrow night.”

52. “I always wanted to travel. I just never got the opportunity.” – Thelma

More Thelma & Louise Quotes That You Will Enjoy

54. “Yeah. He says he’s not ready yet. He says he’s still too much of a kid himself. He kinda prides himself on being infantile.” – Thelma

57. “There’s no physical evidence. We can’t prove he did it. We can’t even probably prove by now that he touched you.” – Louise

58. “Ya gotta wait for just the right moment, which is something you know instinctively, that can’t be taught.” – J.D.

59. “Yeah, but they don’t know that. It was just you and me there. I’ll say he raped me and you had to shoot him. That’s almost the truth.” – Thelma

60. “Yeah. Now what kind of deal is that cop gonna have to come up with to beat that?” – Louise

Do You Think Thelma & Louise Helped Pave the Way for Women’s Empowerment?

Thelma & Louise is a celebration of friendship and solidarity. They show a woman’s ability to fight and stand up for herself and for what is right. And, as true friends, no matter how tricky things got, they stuck by each other.

Yes, the whole fiasco of committing crimes may not be a good influence. But, remember that they only resorted to this because they were harassed and their reputations were damaged. If we look beyond that, though, Thelma & Louise is a great movie we can all learn from.

Through the characters, our eyes are also opened to the value of taking risks. Push yourself to take a leap of faith and be prepared to face the consequences. After all, life is unpredictable, and we must be ready for whatever may come.

What other lessons do you think are embedded in the movie? Share your thoughts with us!