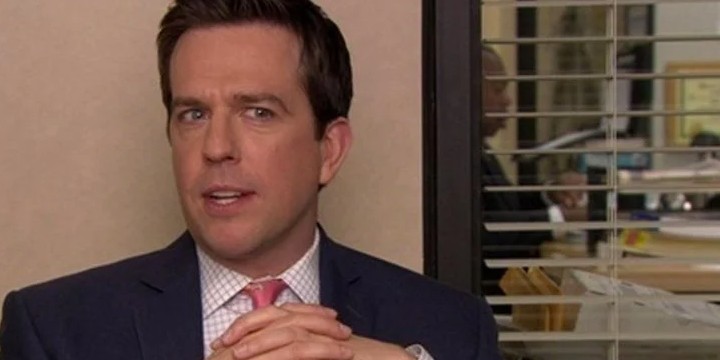 Laugh, learn, and be inspired by reading this collection of the best Andy Bernard quotes.

Andy Bernard is a character introduced in season three of The Office. Though he is one of the most unlikeable characters in the sitcom, he undeniably made the funniest and most enjoyable parts of the series.

His arrogance and selfishness made him a perfect character for dark comedy and dry humor. But, despite these traits, Andy was still able to inspire people with his leadership skills and tenacity.

The workplace became a positive space because he made sure that people worked collectively and had fun. So, don’t miss out on reading our complete collection below to learn more about Andy.

And make sure to check out these The Office quotes and Michael Scott quotes.

1. “Andy Bernard does not lose contests. He wins them. Or he quits them because they’re unfair.”

2. “I wish there was a way to know you’re in the good old days before you’ve actually left them.”

3. “I’m always thinking one step ahead, like a carpenter that makes stairs.”

4. “Every little boy fantasizes about his fairytale wedding.”

5. “He may have won the battle, but I will win the next battle.”

6. “When you’re in a rock and roll band with somebody, you’re bonded for life.”

7. “I am a great interviewee. Why? Because I have something no one else has: my brain. Which I use to my advantage when advantageous.”

8. “Sorry I annoyed you with my friendship.”

9. “The weird thing is now I’m exactly where I want to be. I’ve got my dream job at Cornell, and I’m still just thinking about my old pals.”

Andy Bernard Quotes to Give You Insights Into Love and Dating

11. “How do I find out if a girl is interested? Great question. I usually just assume that they’re not.”

13. “Put your heart out there like that, it’s liable to just turn into this blackened carbon brick where it has barbecue sauce of shame and rage, and two hot people with a perfect relationship would not understand that!”

14. “You can’t let a girl feel good about herself. It will backfire on you. Every compliment has to be backhanded. Oh, I like your dress, but I’d like it more if you had prettier hair.'”

15. “Erin and I have our first date tonight, and it has to be perfect. Why? Because according to ‘How I Met Your Mother,’ that’s the date that your kids are going to wait patiently to hear about, and you’d better have a good story to tell them.”

16. “Yeah, so life gives you lemons, and you just have to eat them rinds and all. And if you don’t want to eat them, your ex-girlfriend will shove them down your throat with the help of her hunky new boyfriend.”

18. “Mistletoe is not an excuse for sexual assault.”

20. “The male is a funny species. We don’t just tell each other how we feel.”

21. “I’m not Rumpelstiltskin, Jim. I can’t keep spinning gold out of your shit!”

22. “I don’t have kids or anything, but if my grandmother ever dies, I’m going to kill myself.”

Andy Bernard Quotes to Know More About His Personality and Mindset

23. “When I got the nickname Boner Champ, that’s when I became me.”

25. “You give me a gift? Bam! Thank you note. You invite me somewhere? Pow! RSVP. You do me a favor? Wham! Favor returned. Do not test my politeness.”

26. “There are two things I am passionate about: recycling and revenge.”

28. “Toby! Hey, I changed my mind again. I am gonna leave Dunder Mifflin to pursue acting after all.”

29. “Oh, speaking of time machines, I just got back from the future, and I went to your funeral, and guess what? Nobody came.”

30. “I guess I don’t have what it takes to be a film critic. I could be a food critic, ‘These muffins taste bad.’ Or maybe an art critic, ‘That painting is bad.'”

31. “If I had to put Dwight’s chances into a percentage, I would say he has none percent chance.”

32. “What if Dwight dies and I still owe him something? That is a recipe for a ghost.”

33. “I’m petrified of nipple chafing. Once it starts, it’s a vicious circle. You have sensitive nipples, they chafe, so they become more sensitive, so they chafe more. It’s a tough one. Gotta take precautions.”

34. “Guys, word of advice. Speaking as a former baby, don’t get too hung up on baby names. I was named Walter Jr. after my father until I was about six or so when my parents changed their minds.”

35. “Protect her from what? Bears, you idiot? When’s the last time you saw a damn bear in Scranton?”

36. “What I wouldn’t give for one of Phyllis’s classic room clearing farts right now.”

Hilarious Andy Bernard Quotes for Office Workers Like Him

37. “The entire office has come down with a pernicious case of the Mondays.”

38. “I’ve been trying to act and manage this branch. Half the time, I don’t know if I’m wearing my stage makeup or my work makeup.”

39. “I’ll be the number two guy here in Scranton in six weeks. How? Name repetition, personality mirroring, and never breaking off a handshake.”

40. “Big Tuna is a super ambitious guy, you know? Cut-your-throat-to-get-ahead type of guy. But, I mean, I’m not threatened by him. I went to Cornell. Ever heard of it? I graduated in four years, I never studied once, I was drunk the whole time, and I sang in the acapella group, ‘Here Comes Treble.'”

Did These Andy Bernard Quotes Make You Reflect on Your Views on Work?

Andy Bernard started as an obnoxious person with anger issues. But, as we watch him in the next seasons, we can see how he actively changed himself to be better and kinder toward his workmates.

His initiative to improve was a testament to his love and commitment to his work. With this kind of powerful quality, other people can be inspired to find fulfillment in what they do. Learning about Andy Bernard teaches us that no matter how many flaws you have, you will succeed in life as long as you have the persistence to keep going.

There are many more to learn about work and leadership from this collection. So, make sure to rewatch The Office and reread these quotes from Andy Bernard.