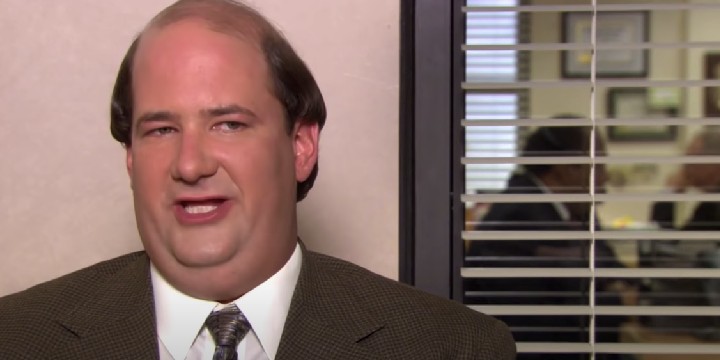 Allow these Kevin Malone quotes to brighten your day with nuggets of wisdom and a dash of joy!

Kevin Malone is a fictional character from the TV show, The Office. He wasn’t the brightest employee, but he was one of the most likable. He mostly fantasized about not having to work, getting plenty of rest, and eating a lot of food.

Well, who wouldn’t love that? That is why it’s time to get a dose of laughter with some funny quotes by Kevin Malone that you’ll surely like! Make sure you read through to the end because we’re sure you’ll be able to relate with most of his thoughts!

And don’t forget to check out these Michael Scott quotes and The Office quotes.

1. “I have very little patience for stupidity.”

2. “I do deserve a vacation. Sometimes Batman’s got to take off his cape.”

3. “I like knowing that there’s going to be a break. Most days I just sit and wait for the break.”

4. “Sometimes I feel like everyone I work with is an idiot. And by sometimes, I mean all times. All the time.”

5. “Me think, why waste time say lot word, when few word do trick.”

6. “What would you say to you and me hittin’ the town? ‘Cause I’m free, literally forever.”

8. “I want to be wined and dined and sixty-nined.”

9. “I kinda know what it’s like to be in commercials. My nickname in high school used to be Kool-Aid Man.”

11. “Put back everything in the vending machine, except the fruit.”

12. “The trick is to undercook the onions. Everybody is going to get to know each other in the pot.”

13. “You think this is a great party? This cake has vegetables in it. Like a salad bar, Robert.”

15. “I hear Angela’s party will have double fudge brownies. But it will also have Angela.”

16. “The only problem is whenever I try to make a taco, I get too excited and crush it.”

17. “Oh, nothing is ever your fault! Just like when you ate those maple candies that you brought for us!”

18. “I don’t wanna put you out, but if someone’s making oatmeal I’ll take an apple cinnamon and a maple-brown sugar in one bowl, with whole milk.”

20. “This is a documentary? Ohhhh. I always thought we were like specimens in a human zoo.”

21. “I go to the bathroom for 45 minutes and everything changes.”

26. “I’m gonna get in my car. When I start dying I will honk the horn three times. That means save the dog.”

27. “Hey Deangelo, what do you think about bald people? I hate them.”

29. “I got myself a secret Santa. I was supposed to tell somebody, but I didn’t.”

31. “I got six numbers, one more and it would have been a complete phone number.”

32. “I am enormously proud of what I did for that turtle.”

34. “You’re too character-y to be a lead, and you’re not fat enough to be a great character actor.”

35. “So, Dwight doesn’t understand what a silent auction is. I guess he’s the ‘stupid guy’ in the office, huh? ‘Cause up ’till now, we didn’t have one.”

37. “The people here are amazing debaters. I guess you can say they are master-baters.”

38. “A fluke is one of the most common fish in the sea, so if you go fishing for a fluke, chances are you just might catch one.”

39. “They have such strong team chemistry and such a great culture, committed to winning and to the team more than the individual. They can take on a troubled guy or a high-maintenance guy. They can mold him into shape, and basically protect him from himself.”

40. “Oh, what a summer. I ran over a turtle in the parking lot. But then I saved him by gluing his shell back together. I’m not that good at puzzles so I used stuff from around the office, but I couldn’t get the pieces to fit right. Then one day while I was reaching for the glue, I crushed the shell again. But I rebuilt him a better shell that time. But then it turned out the turtle was already dead. Probably when I ran him over the first time.”

Do You Want to Have an Officemate Like Kevin Malone?

We’re all tired of going through the same routines and motions at work. Come Monday, and up till Friday, we’re faced with never-ending reporting, documenting, and deadlines! But, the presence of our entertaining coworkers allows us to temporarily escape from all of the stressors at work.

Kevin Malone is the best example of an employee who will spread positive energy to his colleagues. Even though many people dismiss him as just another slow-witted accountant, true fans of the show recognize him as an entertainer in his own way.

Behind his iconic and hilarious jokes, he is also a man with lessons to share. For Kevin, it is essential to have some time to relax. Don’t always be serious at work; instead, spend time laughing and smiling!

We hope his hilarious quotes made you laugh and smile today! So, if you ever feel down about your work or the daily grind, feel free to read this collection.

Which of his quotes entertained you the most? Did Kevin Malone push you to take your next vacation or take the next bite out of your favorite meal? Please, leave a comment below.