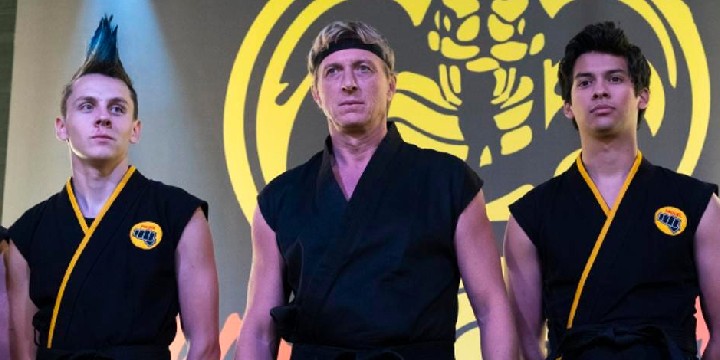 Find inspiration to fight and spread kindness by reading these Cobra Kai quotes.

Cobra Kai is a martial arts series and a continuation of The Karate Kid movies. The story revolves around the Cobra Kai karate dojo’s reopening from Johnny Lawrence’s perspective. It is an action-packed show that you should definitely watch because of its lessons about compassion, discipline, and life.

Like The Karate Kid movies, Cobra Kai shows the effect of proper nurturing on people. The environment and teaching styles that Johnny and Daniel grew up in reflect the kind of sensei they grew up to be.

Our environment, experiences, and encounters play a massive role in shaping kids into wonderful human beings. So, as adults, we should learn how to help the younger people navigate toward a more moral life. Cobra Kai shows how wisdom is passed on from one generation to the next, so be sure you don’t miss out on the quotes below!

And don’t forget to check out these Johnny Lawrence quotes and Ted Lasso Quotes.

1. “Put good into the world, and good will come back to you.” – Kumiko

2. “When negative feelings overwhelm you, look for the good within yourself.” – Daniel LaRusso

3. “Never mind your past mistakes, don’t let them determine your future.” – Carmen Diaz

4. “I may not always win, but I never back out of a fight.” – Johnny Lawrence

7. “Sometimes the scars you can’t see are the ones that hurt the most.” – Samantha LaRusso

8. “You are the only one who can get up when you are down.” – Daniel LaRusso

9. “I’m not just gonna teach you how to conquer your fears. I’m going to teach you how to awaken the snake within you. And once you do that, you’ll be the one who’s feared. You’ll build strength. You’ll learn discipline. And when the time is right, you’ll strike back.” – Johnny Lawrence

10. “If you have hate in your heart, then you have already lost.” – Daniel LaRusso

11. “In the real world, you can’t expect people to do what they’re supposed to do.” – Johnny Lawrence

12. “In life, we always lose our way. But it is people, not the signs, that guide us back to the right path.” – Kumiko

14. “When the fight comes to you, you have to be ready to fight back.” – Daniel LaRusso

15. “You just gotta feel the energy and just live in the moment, you know?” – Hawk Moskowitz

16. “It doesn’t matter if you’re a loser, a nerd, or a freak. The only thing that matters is that you become badass.” – Johnny Lawrence

17. “Alone, we are nothing, but if we work together, we have a shot.” – Samantha LaRusso

18. “It may not seem brave, but sometimes, avoiding conflict is one of the most heroic things you can do.” – Daniel LaRusso

19. “I’m gonna have to face him sooner or later. Might as well be today.” – Robby Keene

21. “Two cobras in the jungle. One kills the strongest lion, the other kills a crippled monkey. Which cobra do you want to be?” – Johnny Lawrence

Cobra Kai Quotes That Are Packed With Wisdom

24. “If your enemy insists on war, then you take away their ability to wage it.” – Chozen Toguchi

25. “Everybody’s got a sob story. Doesn’t give you the right to be a bully.” – Samantha LaRusso

26. “Don’t forget. Being a badass doesn’t mean being an *sshole.” – Johnny Lawrence

28. “Just because something’s been around longer doesn’t make it better.” – Johnny Lawrence

30. “All that Miyagi-Do mumbo jumbo, that might score you points in a tournament. But now you’re in the real world, kid, you might wanna learn to strike first.” – John Kreese

31. “There is your side and your side, and then there is the truth. And the truth is, you guys are more alike than you’ll admit.” – Ali Mills

33. “When one of you makes a move, you all make a move. You live, and you die with the consequences and the spoils because you are all Cobra Kai.” – John Kreese

Motivational Cobra Kai Quotes for People Who Want to Better Themselves

34. “Life isn’t always fair. Sometimes, the world can be cruel. That’s why you have to learn to be cruel yourselves.” – John Kreese

36. “Quiet! Never ‘can’t.’ Those are just words. They’re meaningless. It’s time to get out of bed and do something. You’re not a kid anymore. The world isn’t just gonna hand it to you. You want something, you’re going to have to crawl across the floor, use your damn teeth if you have to. You’ll have to do whatever it takes.” – Johnny Lawrence

38. “What, do you want those kids at school to keep dumping sh*t on your head? You want all the girls to think you’re a wangless dork? ‘Cause you can stop your training right now, and you can walk outside and let the whole world know you’re a loser. Or you can plant your feet, look your enemy in the eyes, and punch him in the face!” – Johnny Lawrence

39. “The world shows no mercy so, why should we? Some people have it good, but the rest of us, we haze to fight for every inch of what’s ours. Not just to score a point. For everything.” – Tory Nichols

Short Cobra Kai Quotes to Bring Out the Fighter Inside You

42. “A true cobra feels no sympathy for its meals.” – John Kreese

46. “To be Cobra Kai, you have to have a killer instinct.” – Johnny Lawrence

50. “Are you sure you’re ready? ‘Cause once you go down this path, there’s no turning back.” – Johnny Lawrence

51. “I wasn’t taught the difference between mercy and honor, and I paid for it. If I’m extra hard on you, it’s because you have the ability to be better than me.” – Johnny Lawrence

52. “We do not train to be merciful here. Mercy is for the weak. Here, in the streets, in competition.” – John Kreese

53. “You know what they say, there’s no such thing as a bad student.” – Johnny Lawrence

54. “You can leave your asthma and your peanut allergies and all that other made-up bullshit outside.” – Johnny Lawrence

55. “When I look around this dojo, I don’t see Cobra Kai material. I see losers. I see nerds. I see a fat kid with a funny hat and his t*ts popping out.” – Johnny Lawrence

Memorable Cobra Kai Quotes That Will Stay With Us Forever

56. “At least I know who I am. You are still trying to be something you’re not.” – Tory Nichols

59. “It’s different when you are a girl. I mean, even when you win, you’re not cool or tough. They think you are crazy.” – Samantha LaRusso

60. “I’m a teenager who makes mistakes. You’re a 50-something-old man who lives alone and clearly hasn’t figured out his own life.” – Samantha LaRusso

61. “The human’s response to danger is fight or flight, but an eagle’s response is fight and flight.” – Johnny Lawrence

Cobra Kai Quotes That Will Make You Chuckle

63. “You should all be proud of yourselves. I know I’m proud. Your parents would be proud too if you told them what we did here today, which we won’t!” – Johnny Lawrence

64. “There’s nothing to fear except for fear itself, that and falling in a bunch of sharp metal and broken glass, so don’t do that!” – Johnny Lawrence

67. “God, just looking at you makes me feel like a virgin.” – Johnny Lawrence

71. “I didn’t call her a b*tch. I said she was bitching at me. There’s a difference. You’re firing me ’cause of that b*tch?” – Johnny Lawrence

75. “I knew she was smart, but I figured she was hot enough to avoid work.” – Johnny Lawrence

76. “I don’t want to screw things up with Miguel. Then again, you’re pretty hot.” – Johnny Lawrence

79. “In Japan, you can always visit someone. They speak to us, even when they’re gone.” – Bartender

Did These Cobra Kai Quotes Give You Deep Realizations About Life?

One of the things that Cobra Kai taught its viewers is balance and compassion. Life throws a lot of hardships on people, and we will never have control over it. On the flip side, we have the power over our actions and decisions, as shown in the series.

We can always act with compassion and kindness and control the balance of chaos and calmness inside. Making incorrect judgments will be unavoidable but trying to be kind and at peace will help us fight our way through life. With that, there’s no doubt that Cobra Kai is the perfect teacher in matters of life and control.

We hope that these Cobra Kai quotes were able to inspire you to be a fighter in your life. Remember to never give up, and always be kind! Live life righteously, and good things will come to you.

Which Cobra Kai quote is your favorite? Did you learn a lot from this quote collection? Comment below!