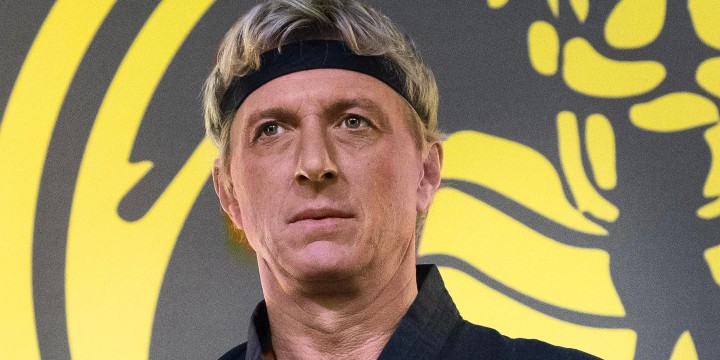 If you’re looking for words of wisdom about persistence and reaching your dreams, then these Johnny Lawrence quotes will give you the guidance you need.

At first, Johnny Lawrence was the typical bully who was only good at fighting. But, as we get to know his character more in Cobra Kai, we learn how he tries to be a better person. By teaching what he knows in the dojo, he redeems himself from his past mistakes and guides his students toward reaching their dreams.

The show also emphasizes one of Johnny’s admirable traits—his persistence. No matter how many times he was defeated and caused harm to others, he forgives himself and works to be better.

There is indeed a lot to learn from Johnny Lawrence. So, don’t miss out on exploring his teachings in our collection below.

And make sure to check out these Cobra Kai quotes and Ted Lasso quotes.

5. “Just because something’s been around longer doesn’t make it better.”

6. “I wasn’t taught the difference between mercy and honor, and I paid for it. If I’m extra hard on you, it’s because you have the ability to be better than me.”

8. “In the real world, you can’t expect people to do what they’re supposed to do.”

9. “There’s only one reason to hit someone—to inflict pain. Striking hard is about giving your all.”

10. “Ali, you’re right. It’s crazy how things change. For a long time, I didn’t have much direction in my life. But then, things got better. I met a kid who needed some help. So I got back into karate, became a sensei. There were ups and downs. I even gave up for a while. But I can’t give up anymore. I have a long way to go to be a better man, a better father, a better teacher. But I can make a difference in these kids’ lives. It’s a tough world out there, and I can help them be ready for it. That’s what I’ve been up to. That’s who I am. I’m a sensei.”

Johnny Lawrence Quotes to Guide You in Life

11. “Two cobras in the jungle. One kills the strongest lion. The other kills a crippled monkey. Which cobra do you want to be?”

12. “Are you sure you’re ready? ‘Cause once you go down this path, there’s no turning back.”

13. “Quiet! Never ‘can’t.’ Those are just words. They’re meaningless. It’s time to get out of bed and do something. You’re not a kid anymore. The world isn’t just gonna hand it to you. You want something, you’re going to have to crawl across the floor, use your damn teeth if you have to. You’ll have to do whatever it takes.”

14. “It doesn’t matter if you’re a loser, a nerd, or a freak. The only thing that matters is that you become badass.”

Johnny Lawrence Quotes That’ll Teach You How to Fight

18. “I’m not just gonna teach you how to conquer your fears. I’m going to teach you how to awaken the snake within you. And once you do that, you’ll be the ones who are feared. You’ll build strength. You’ll learn discipline. And when the time is right, you’ll strike back.”

19. “Tell your brain to tell your legs to get their *sses moving.”

20. “What, do you want those kids at school to keep dumping sh*t on your head? You want all the girls to think you’re a wangless dork? ‘Cause you can stop your training right now, and you can walk outside and let the whole world know you’re a loser. Or you can plant your feet, look your enemy in the eyes, and punch him in the face!”

21. “The human response to danger is fight or flight, but an eagle’s response is fight and flight.”

22. “To beat the living crap out of ’em. Don’t let ’em push you around. You gotta swoop down like an eagle, grab ’em with your claws, and sink your fangs into ’em. But I don’t ever want you to start the fight. I just want you to.”

23. “The older you get, the more you’re going to learn that life isn’t fair. You wake up one morning feeling great, and then life throws a spinning heel kick to your balls and takes a big steaming sh*t in your mouth. That’s how it goes.”

24. “You can leave your asthma and your peanut allergies and all that other made-up bullshit outside.”

Meaningful Johnny Lawrence Quotes That Are Packed With Wisdom

27. “This park will be our new dojo because you don’t need a dojo to be a dojo.”

Johnny Lawrence Quotes That Show His Emotional Side

31. “Please don’t close the door. Look, I know I wasn’t there for him when it mattered. I let him down. I guess I let you down too. And I know there’s no do-overs, but that kid is the only person in the world who hasn’t given up on me. And I don’t want to give up on him. I know I messed up big-time, but if you let him come back, I won’t fail him again. I promise.”

33. “Go anywhere near Miguel and his family, and I’ll kill you.”

37. “There’s nothing to fear except for fear itself, that and falling in a bunch of sharp metal and broken glass, so don’t do that!”

38. “Don’t give me this sexist bullshit, alright. I’m just saying women aren’t meant to fight. They have tiny hollow bones.”

39. “You should all be proud of yourselves. I know I’m proud. Your parents would be proud too if you told them what we did here today, which we won’t!”

40. “I knew she was smart, but I figured she was hot enough to avoid work.”

41. “When I look around this dojo, I don’t see Cobra Kai material. I see losers. I see nerds. I see a fat kid with a funny hat and his t*ts popping out.”

44. “I don’t want to screw things up with Miguel. Then again, you’re pretty hot.”

Short Johnny Lawrence Quotes for You to Enjoy

48. “Change that ring tone. Get some Guns N’ Roses or something.”

49. “Same reason there aren’t women in the army. It doesn’t make sense.”

Did These Johnny Lawrence Quotes Inspire You to Be Better?

It is undeniable that Johnny Lawrence’s inspiring and hilarious scenes in the series stole our hearts. We witnessed his growth and motivation to redeem himself from his past actions throughout the series.

Johnny is a product of the abuse he experienced, which turned him into a bully and selfish person. However, in the Cobra Kai series, we can see how his students changed him. He realized how important love and empathy are in reaching our dreams.

Many of us working toward a particular goal can find ourselves relating to Johnny Lawrence. Sometimes, we are blinded by pride that we hurt other people and neglect the essential things in our life. But, always remember that it is never too late to start redeeming yourself like him.

We hope you were able to pick up many lessons from these Johnny Lawrence quotes. Make sure to reread our collection whenever you need some inspiring words in your life.

What did you learn from Johnny Lawrence? Do you have your favorite quote? Leave a comment below!