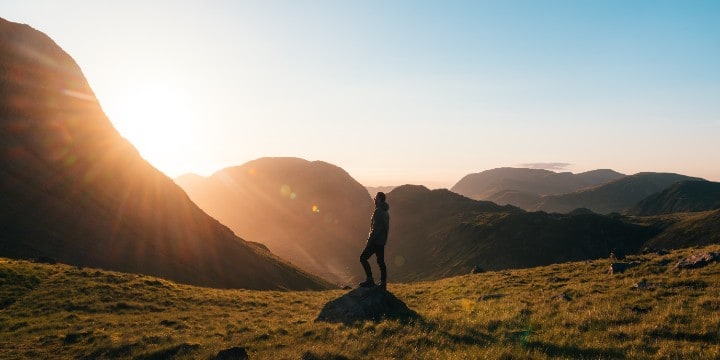 Let these enlightenment quotes power your spirit with knowledge and help you reach your highest potential.

Reaching enlightenment is one of the highest purposes of living. It means spreading love and kindness to the world. It also means that we must understand the deepest parts of ourselves.

Moreover, enlightenment gives us lessons about letting go of attachments and expectations. After all, ending our pain and suffering is to learn about being content and fulfilled. And, by taking active steps to reach enlightenment, we invest ourselves in something bigger that can change the world.

So, if you are interested in enlightenment, then add this to your must-read list now. Continue reading below and see what it really means to be awakened and content.

And don’t forget to check out these positive quotes and encouraging quotes.

1. “Enlightenment is the journey from the head back to the heart, from words back to silence.” – Jock Brocas

3. “Enlightenment is the inner light of wisdom that is permanently free from all mistaken appearance, and whose function is to bestow mental peace upon each and every living being every day.” – Geshe Kelsang Gyatso

6. “Enlightenment is found within the mind, not outside it in various worldly phenomena. It is found in wisdom, not ignorance, in virtue and purity, not evil and pollution.” – William Bodri

8. “Enlightenment is not a change into something better or more, but a simple recognition of who we truly already are.” – Anonymous

9. “Enlightenment, joy, and peace can never be given to you by another. The well is inside you.” – Thích Nhất Hạnh

12. “The ultimate goal is to know oneself fully as well as one’s place in the world. This is the ultimate enlightenment.” – Jason Chin

13. “Enlightenment has nothing to do with physical knowledge. It is the experience of existence. Existence is infinite. There are countless universes and creations taking place simultaneously.” – Frederick Lenz

14. “Always keep your mind as bright and clear as the vast sky, the great ocean, and the highest peak, empty of all thoughts. Always keep your body filled with light and heat. Fill yourself with the power of wisdom and enlightenment.” – Morihei Ueshiba

16. “Enlightenment or true happiness is not a transcendental state. It is a condition of broad wisdom, boundless energy, and good fortune wherein we each shape our own destiny, find fulfillment in daily activities, and come to understand our ultimate purpose in life.” – Jōsei Toda

17. “Everyone has a spirit that can be refined, a body that can be trained in some manner, a suitable path to follow. You are here to realize your inner divinity and manifest your innate enlightenment.” – Morihei Ueshiba

18. “So love all and serve all selflessly and impartially, and I promise you, you will be on your way to enlightenment in the quickest and most proper way.” – Pejman Aghas

20. “You are destined for enlightenment. Cooperate with your destiny, don’t go against it, don’t thwart it. Allow it to fulfill itself.” – Nisargadatta Maharaj
21. “In essence, enlightenment is a way of seeing, that is, of experiencing and relating, to which we had previously been unaccustomed.” – Robert Wolfe

22. “Enlightenment or awakening is not the creation of a new state of affairs but the recognition of what already is.” – Alan Watts

23. “To enjoy good health, to bring true happiness to one’s family, to bring peace to all, one must first discipline and control one’s own mind. If a man can control his mind, he can find the way to enlightenment, and all wisdom and virtue will naturally come to him.” – Buddha

24. “Enlightenment is the experience of intimacy with the entire universe. There is no separation whatsoever. You totally disappear in the process of uniting with the raw content of the present moment. And because you do, you have never been more alive.” – Larry Rosenburg

25. “What you focus on, you become. So always focus on that which is highest, brightest, happiest and most noble of all things—enlightenment.” – Frederick Lenz

26. “Enlightenment is man’s release from his self-incurred tutelage. Tutelage is man’s inability to make use of his understanding without direction from another. Self-incurred is this tutelage when its cause lies not in lack of reason but in lack of resolution and courage to use it without direction from another. ‘Sapere Aude!’ ‘Have courage to use your own reason!’ That is the motto of enlightenment.” – Immanuel Kant

Enlightenment Quotes to Guide You in Life

27. “Knowing others is wisdom, knowing yourself is enlightenment.” – Lao Tzu

29. “The real meaning of enlightenment is to gaze with undimmed eyes on all darkness.” – Nikos Kazantzakis

30. “You are here for no other purpose than to realize your inner divinity and manifest your inner enlightenment. Foster peace in your own life and then apply the art to all that you encounter.” – Morihei Ueshiba

31. “Nirvana or lasting enlightenment or true spiritual growth can be achieved only through persistent exercise of real love.” – M. Scott Peck

32. “If I could define enlightenment briefly, I would say it is the quiet acceptance of what is.” – Wayne Dyer

33. “The moment of enlightenment is when a person’s dreams of possibilities become images of probabilities.” – Vic Braden

34. “Enlightenment must come little by little. Otherwise, it would overwhelm.” – Idries Shah

35. “Do not think you will necessarily be aware of your own enlightenment.” – Dōgen

37. “But understand that the true basis for awakening to the state of enlightenment is found within ourselves.” – The Dzogchen Primer

39. “To achieve enlightenment, one has to accept disgrace and misfortune willingly.” – Lewis Schipper

40. “Talking about enlightenment is also like that. It’s like your eyes trying to see your eyes.” – Seung Sahn

41. “The word enlightenment conjures up the idea of some superhuman accomplishment, and the ego likes to keep it that way, but it is simply your natural state of felt oneness with being.” – Eckhart Tolle

Short Enlightenment Quotes for Everyone Who Needs a New Perspective

42. “Enlightenment is found when I am present to my experience and to God.” – Adele Ahlberg Calhoun’

43. “Personal identity depends on consciousness, not on substance.” – John Locke

44. “Your imagination is the vehicle to enlightenment.” – Gary Hopkins

45. “Enlightenment is man’s emergence from his self-incurred immaturity.” – Immanuel Kant

47. “Enlightenment is absolute cooperation with the inevitable.” – Anthony de Mello

49. “Reading nurtures the soul, and an enlightened friend brings it solace.” – Voltaire

Enlightenment Quotes on Being Awakened

51. “Enlightenment is understanding that there is nowhere to go, nothing to do, and nobody you have to be except exactly who you’re being right now.” – Neale Donald Walsch

52. “Enlightenment is real, and each of us, whoever we are, can in the right circumstances and with the right training, realize the nature of mind and so, know in us what is deathless and eternally pure. This is the promise of all the mystical traditions of the world, and it has been fulfilled and is being fulfilled in countless thousands of human lives.” – Sogyal Rinpoche

53. “The enlightened one has become liberated and freed from all attachments by seeing as they really are the arising and passing away of feelings. The relishing of them, the danger from them, the release of them.” – Buddha

55. “One always begins with the simple, then comes the complex, and by superior enlightenment, one often reverts in the end to the simple. Such is the course of human intelligence.” – Voltaire

56. “Enlightenment is not the experience of the void. There is no void, only the fullness of awareness appearing as a void.” – James A. Swartz

58. “Enlightenment is any experience of expanding our consciousness beyond its present limits. We could also say that perfect enlightenment is realizing that we have no limits at all and that the entire universe is alive.” – Thaddeus Golas

59. “The attainment of enlightenment is, therefore, the real meaning of human life.” – Geshe Kelsang Gyatso

61. “The attainment of enlightenment from ego’s point of view is extreme death.” – Chögyam Trungpa

62. “It is one thing to show a man that he is in error, and another to put him in possession of the truth.” – John Locke

64. “An enlightened Buddha is a person who has woken from the sleep of ignorance, and whose function is to bestow peace of mind on each and every living being.” – Geshe Kelsang Gyatso

66. “Enlightenment is not something to be attained. As a human being, it is your natural state. Your very core is composed of love and light. It is consciousness. It is a fallacy of ego and reality that prevents you from realizing your inner divinity. You must shed the illusions. and you will be left with pure enlightenment. It is not something to attain, you must lose, and you shall be.” – Anonymous

67. “The ego tries to convince us that we must do things to achieve enlightenment. The spirit knows that enlightenment is not a matter of doing, but a magnificent consequence of being.” – Dean Jackson

68. “The mind of an enlightened human being is flexible and adaptable. The mind of the ignorant person is conditioned and fixed.” – Ajahn Sumedho

69. “Those who are enlightened never stop forging themselves.” – Morihei Ueshiba

70. “They say the full potential of the human being is called enlightenment, which is infinite consciousness, infinite happiness, zero negativity, zero dying, complete freedom, total fulfillment, and being at one with everything. You can say it’s God-realization, or you can say you sit at the feet of the Lord as master of all you survey. You could say it’s totality, total knowledge, and that you are that totality. This is every human being’s birthright: to one day enjoy supreme enlightenment and unity. It’s like a big graduation.” – David Lynch

What Is Your Motivation to Reach Enlightenment?

As humans, enlightenment must be one of our main goals in our existence. Although it is an arduous process, it is one worth attempting and understanding deeply. Moreover, it is something you will never find in other people because it starts inside yourself.

Enlightenment can only be reached when you have unlocked the wisdom and power you hold within you. It reminds us that everything we need to know can come from our thoughts and souls. All in all, it is a journey of self-love and self-discovery.

Hopefully, these quotes were able to guide you on your path toward enlightenment. Remember that peace and love are already overflowing inside of you. Don’t look for it in other people and focus on yourself.

Did you learn a lot? Which enlightenment quote is your favorite? Leave a comment below.