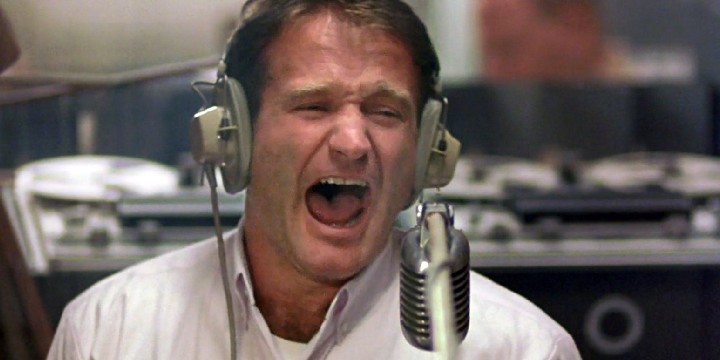 Whatever your preference is for movies, we’re sure you’ll enjoy these Good Morning, Vietnam quotes we’ve gathered!

Good Morning, Vietnam is a movie that tackles a variety of feelings—from courage, risk, and comedy. This made it so relevant to its viewers. And, though many think of it as your typical war movie, it’s much more than that.

It’s a movie that wraps the seriousness of war with a veil of comedy that no other actor aside from Robin Williams can pull off. In fact, Good Morning, Vietnam is still worth watching many times over just because of his role in the movie!

But, aside from the comedy, Robin Williams’s character also undergoes some changes in his personality and mindset. It’s only loosely based on Adrian Cronauer’s real-life experiences, but we still see some of his unique perspectives on war, Vietnam, and what’s going on around him.

So, if you haven’t watched Good Morning, Vietnam yet, our selection below will give you an idea of how enjoyable this movie is.

Don’t miss the best and most inspiring words from your favorite characters!

And make sure to check out these Full Metal Jacket quotes and We Were Soldiers quotes.

2. “Good morning, Vietnam! Hey, this is not a test. This is rock and roll. Time to rock it from the delta to the DMZ! Is that me, or does that sound like an Elvis Presley movie? Viva Da Nang. Oh, viva, Da Nang. Da Nang me, Da Nang me. Why don’t they get a rope and hang me? Hey, is it a little too early for being that loud? Hey, too late. It’s 0600. What’s the ‘zero’ stand for? Oh, my God, it’s early.” – Adrian Cronauer

3. “I just want to begin by saying to Roosevelt E. Roosevelt, what it is, what it shall be, what it was. The weather out there today is hot and shitty, with continued hot and shitty in the afternoon. Tomorrow a chance of continued crappy with a pissy weather front coming down from the north. Basically, it’s hotter than a snake’s *ss in a wagon rut.” – Adrian Cronauer

4. “What is a demilitarized zone? Sounds like something out of The Wizard of Oz.” – Adrian Cronauer

5. “You know, you’re very beautiful. You’re also very quiet. And I’m not used to girls being that quiet unless they’re medicated. Normally I go out with girls who talk so much you could hook them up to a wind turbine, and they could power a small New Hampshire town.” – Adrian Cronauer

6. Adrian Cronauer: “Oh, Edward, don’t you do anything that’s not by the book?”

Edward Garlick: “Not when I get into trouble. No, I don’t.”

Adrian Cronauer: “You know, Eddie, sometimes you got to specifically go out of your way to get into trouble. It’s called fun. What’s that? Come on. Take some chances once in a while, Edward. That’s what life’s all about.”

7. “No, Phil, he’s not all right. A man does not refer to Pat Boone as a beautiful genius if things are alright.” – Edward Garlick

8. “We got one letter from a man who thought that Hauk’s comedy was visionary and interesting. The other eleven hundred calls say that the man can’t do comedy to save his dick! That’s a direct quote, sir.” – Adrian Cronauer

9. Sgt. Major Dickerson: “You’re not gonna last long here, pal.”
Adrian Cronauer: “You can always send me back to Crete.”
Sgt. Major Dickerson: “Oh, you think this is a joke. I can come up with alternatives other than Crete, and I’m really good at stuff like that. I got people stuck in places they haven’t even considered how to get out of yet. You don’t think I can come up with something good? Can you envision some fairly unattractive alternatives?”

10. Sgt. Major Dickerson: “This is not a military issue, airman. What sort of uniform is that?”

Adrian Cronauer: “Cretan camouflage sir. If you want to blend in with a bunch of drunken Greeks, there’s nothing better.”

12. “Five months in Vietnam and my best friend is a V.C. This will not look good on a resume!” – Adrian Cronauer

13. “That’s all right. I did. Hey, come on now. If you kick out the gooks, the next thing, you have to kick out the chinks, the spicks, the spooks, and kikes. All that’s gonna be left in here are a couple of brain dead rednecks, and what fun would that be?” – Adrian Cronauer

15. “You are in more dire need of a bl*wjob than any white man in history.” – Adrian Cronauer

16. “I can’t even make fun of Richard Nixon, and there’s a man who’s screaming out to be made fun of.” – Adrian Cronauer

17. “How can you fight a war in this sh*t? I don’t know where they are; I don’t even know where I am. I can’t see dick. Like hunting with Ray Charles.” – Adrian Cronauer

18. “Here’s a news flash today, President Lyndon Johnson passed a highway beautification bill. The bill basically said that his daughters could not drive in a convertible on public highways.” – Adrian Cronauer

19. “It’s hot. Damn hot! Real hot! The hottest thing is my shorts. I could cook things in it. A little crotch pot cooking.” – Adrian Cronauer

20. “Thank you for the lovely tune, that funky music will drive us till the dawn. Let’s go, let’s boogaloo till we puke!” – Adrian Cronauer

21. “And now, here are the headlines. Here they come right now. The Pope actually found to be Jewish. Liberace is Anastasia, and Ethel Merman jams Russian radar. The East Germans today claimed the Berlin Wall was a fraternity prank. Also, the Pope decided today to release Vatican-related bath products. An incredible thing, yes, it’s the new pope on a rope. That’s right. pope on a rope. Wash with it, go straight to heaven.” – Adrian Cronauer

22. “Here’s a little advice, never eat in a Vietnamese restaurant next to a pound.” – Adrian Cronauer

23. “I have never met a man as big as you, with so many muscles, and so little penis.” – Adrian Cronauer

24. Adrian Cronauer: “How would you describe your testicles?”

Adrian Cronauer: “So what are you saying, sir?”

25. Lt. Steven Hauk: “First of all, don’t make fun of the weather here, and don’t say the weather is the same all the time here. Because it’s not. In fact, it’s two degrees colder today than yesterday.”
Adrian Cronauer: “Two degrees colder, me without my muff.”

Gen. Taylor: “Bullshit! I know Nixon personally. He lugs a trainload of sh*t behind him that could fertilize the Sinai. Why I wouldn’t buy an apple from the son of a b*tch, and I consider him a good, close personal friend.”

Adrian Cronauer: “Well, we walk up to someone and say, ‘Are you the enemy? And, if they say yes, then we shoot them.”

29. “What is the difference between the Cub Scouts and the military? Bzzzzzt. Cub Scouts don’t have heavy artillery.” – Adrian Cronauer

30. “I was almost killed. A truck’s bumper was this far from my nose. My whole life passed before my eyes—and it wasn’t even interesting to me.” – Edward Garlick

31. Sgt. Major Dickerson: “What does three up and three down mean to you, airman?”
Adrian Cronauer: “End of an inning?”

32. “Aw, Edward, you don’t understand. I’ve been on a small Greek island with a lot of women who look like Zorba; I never thought I’d find women attractive ever again. And now that I do, you won’t even turn the car around? Thanks a lot.” – Adrian Cronauer

33. “‘Captain Hauk sucks the sweat off of a dead man’s balls.’ I have no idea what that means, sir, but it seems very negative to me.” – Edward Garlick

37. Adrian Cronauer: “Okay, if someone is not telling the truth, you say that they are full of—.”

Adrian Cronauer: “If someone has made you angry or angrier, they have—.”

Vietnamese Class: “Pissed me off!”

Adrian Cronauer: “Oh, I don’t know. There are plenty of things I can think of. Maybe go downtown and try to find a Vietnamese man named “Phil.”

Gen. Taylor: “Real pleasure. If you have any problems, you come to see me. I’m the tallest hog in the trough around here.”

Gen. Taylor: “Garlick, have you put on some weight?”

What New Things Did You Discover About the World of Comedy and War Through These Good Morning, Vietnam Quotes?

When you think of war movies, you immediately think of guns, fighter jets, and bombs. But, in Good Morning, Vietnam we can view war from the outside—through Adrian Cronauer’s commentaries. His lines and quips about what he’s observing breathed life into each and every scene of the movie.

Indeed, Good Morning, Vietnam is one of the most underrated movies of all time. Yes, it tackles war, violence, and more. But, it does so with a creative style that helps you see things through a whole new lens.

The movie also brings important values like hope, courage, and tenacity to the forefront. In war, we fight our fears, no matter how big they might be, to attain victory. This is the same in life; we must be brave enough to do more than we think we can to achieve more out of life.

With that, we hope this list of the best Good Morning, Vietnam quotes was able to help you look at the movie in a whole new light. The next time you watch it, make sure you remember these lessons!

What is your biggest takeaway from the movie? Let’s hear about your thoughts below!