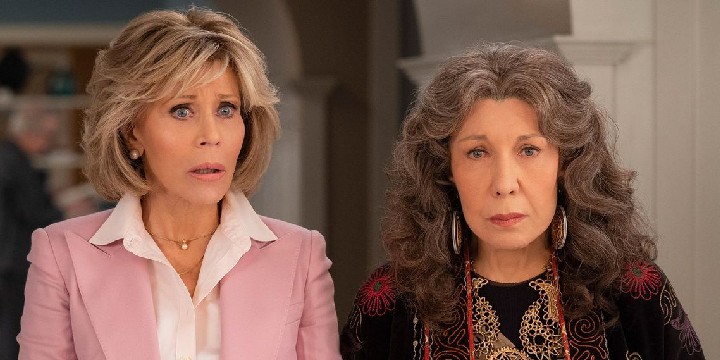 We’ve gathered our favorite Grace and Frankie quotes to immerse you in one-of-a-kind stories that will teach you valuable life lessons you’ll never forget!

Marta Kauffman and Howard J. Morris created one of the best hit comedy TV shows, Grace and Frankie. It’s a show about 70-year-old women who are thrown into an unusual situation with no warning.

Their respective husbands, Robert and Sol, take them out to dinner and break the news that they’re gay and together. As everything around the ladies falls apart, the only thing on which they can genuinely rely is each other.

So, are you interested in learning about their life journey? Browse our collection to learn how to deal with aging, marriage, and more!

And don’t forget to check out these Schitt’s Creek quotes and Shameless quotes.

1. “We are both formidable people who detest children.” – Grace Hanson

2. “When you left, I thought my life was over. I can’t sleep in that big fucking bed without him. But I did it. And now I love having that bed to myself, it’s fantastic, I sleep in a giant X! You know what this means? I’m okay, and I’m going to be okay. Ta-da, congratulate me.” – Frankie Bergstein

3. “I played by all the rules! Why didn’t you tell me there weren’t any rules, it’s not fair!” – Grace Hanson

4. “I gained another pound today. But I think it’s a pound of knowledge.” – Frankie Bergstein

5. “You should probably brace yourself for some light vomiting followed by life-altering hallucinations.” – Frankie Bergstein

6. “You know, at my age I only have one speed: breakneck. Of course, I don’t call it that. Because it is a very real fear.” – Grace Hanson

7. “Once you see the real me, you are gonna run for the hills.” – Frankie Bergstein

8. “Everybody needs to toughen up and get me resurrected before I really lose my shit!” – Frankie Bergstein

9. “Have you met me? I avoid all hard conversations. It’s why I carry hard liquor.” – Grace Hanson

10. “Soulmate! Now there is a meaningless concept.” – Grace Hanson

11. “Relieved? Really? I think relief is what you’re feeling. I’m feeling like the last 40 years have been a fraud.” – Grace Hanson

12. “I don’t know why she has to blow everything out of proportion. Ya know, I might have said some terrible things to her but I was drunk. I didn’t mean it.” – Grace Hanson

15. “Bring me a glass and a shrimp cocktail but hold the shrimp. I will DIY a Bloody Mary.” – Grace Hanson

17. “Would you mind taking me back home or setting me on fire?” – Grace Hanson

18. “I had a roommate who once used my underpants as a napkin.” – Grace Hanson

21. “If you’re going into the kitchen could you get me two whiskey sours? One for each hand.” – Frankie Bergstein

22. “Why would you yell at a golden retriever? They’re like living hugs!” – Frankie Bergstein

23. “This is not the energy I wanted to start my vision quest with.” – Frankie Bergstein

24. “I see what you’re doing. Accidental meeting. Erica Kane did that to Dimitri Marick on All My Children. Someone ended up dying, then coming back as a twin, and then dying again in a grain silo. I like it.” – Frankie Bergstein

25. “Have you ever wondered if Ben and Jerry make more than ice cream together?” – Frankie Bergstein

26. “I don’t need anybody but me to tell me that I’m an artist.” – Frankie Bergstein

27. “Isn’t it a little early for that watermelon to be drunk? I’m talking about you, Grace. You’re the watermelon.” – Frankie Bergstein

29. “No, no, that wasn’t a stroke. They hadn’t perfected edibles back then.” – Frankie Bergstein

30. “The house is ready for the Chin family. Do you think I should leave them some sage so that they can get rid of our juju?” – Frankie Bergstein

31. “I struggle to believe you.” – Frankie Bergstein

32. Frankie Bergstein: “Oh, so it’s okay for you to spend time with your ex-husband, but not me.”

33. Frankie Bergstein: “Is that why you’re wearing that ass hugging dress?”

Grace Hanson: “Exactly. Yes. When I walk into Larry’s house, everybody’s going to look at me and say, ‘what a waste?’”

Frankie Bergstein: “Wouldn’t they be saying that when you walk out?”

34. Grace Hanson: “Okay, that lacked poise. And I’m sorry, but I refuse to be irrelevant.”

Frankie Bergstein: “It’s okay. I learned something. We’ve got a superpower.”

35. Grace Hanson: “You are in need of some serious cheering up.”

Frankie Bergstein: “I’m not without cheer. I’m a little down. It’s an honest down, and since you are so up, there’s a homeostatic balance.”

Frankie Bergstein: “They’re round. They do not fold. Anyone who can do this is a powerful witch.”

Frankie Bergstein: “I rest my case.”

Grace Hanson: “Solving the mystery of who put Jolly Ranchers in the blender isn’t much of a track record.”

38. Grace Hanson: “Sol’s probably going to ask you to do an interpretive dance.”

Frankie Bergstein: “I don’t think I can. I mean, I could. I mean, I usually see where my body takes me in the moment.”

Frankie Bergstein: “I go to a restful place in my mind and I let the painting come to me.”

Grace Hanson: “So what’s coming to you?”

40. “I want a man who’s there when I want him and gone when I don’t, and is affectionate, not too much, and has great hair and good hygiene.” – Brianna Hanson

41. “I lost both my virginities in this house, it’s my house.” – Brianna Hanson

Grace and Frankie Quotes That Zoom in on Relationships

Grace Hanson: “I don’t know. Not talking is your forte.”

46. Robert Hanson: “No. You’re right. It is not nothing. And I should have told you a long time ago. But let’s be honest. Were you ever really happy with me?”

47. “I mean, what if we’ll never be able to be happy because our entire relationship was based on lies and betrayals so awful that karmically we’re doomed?” – Robert Hanson

48. “I just prefer to have everybody like me.” – Sol Bergstein

Sol Bergstein: “Come here. I hate that I hurt you. I really do love you. I mean, you’ve always loved me for—.”

Frankie Bergstein: “Who you are? Ironic, isn’t it?”

Interesting Grace and Frankie Quotes for Those Curious About Aging

50. “What about dryness, are you worried about that?” – Frankie Bergstein

52. “And as our bodies age, we stop producing its natural lubricants.” – Frankie Bergstein

53. “You don’t want me to be alone with faith?” – Frankie Bergstein

54. “I’m an amateur sleuth with limited self-control and a computer.” – Grace Hanson

Grace and Frankie Quotes to Tell You More About the Show

55. “Why does Nelson think that I am a drug addict? Can you explain to him that you are the addict and that I am the Black one?” – Nwabudike Bergstein

56. “Yes, who wouldn’t want to be part of the ancient tradition of misogyny and homophobia?” – Sol Bergstein

57. “Your struggle is an inspiration to all of us. Here are your Gucci loafers.” – Grace Hanson

59. “Sol, are you sure we have to write our own vows? I mean, there’s something to be said for being part of a tradition that’s been going on for thousands of years.” – Robert Hanson

60. “Did my mother just call my sister ‘fat?’ Aside from my father almost dying, this is the best day of my life.” – Brianna Hanson

Did These Quotes Open Your Eyes to a New Side of Acceptance and Forgiveness?

Grace and Frankie is a must-see TV show full of themes and lessons that apply to people of all ages. It discusses marriage, family, and the ups and downs of aging, all of which are very significant in life.

In the show, Robert and Sol discover the courage to come out at 70, demonstrating that love and courage have no expiration date. This gives the audience the realization that, really, people’s actions and feelings aren’t something we can dictate. Instead, these things can surprise us!

Grace and Frankie’s learnings also taught us a lot. At first, they were irritated and were put down by what they found out. But in time, they learned to accept, forgive, and genuinely rely on each other for strength.

Indeed, this show is more than just a plot and a series of dialogues. It’s not just a lighthearted show for feel-good moments; it also teaches you some important life lessons. Hopefully, our collection was able to inspire you to break free from whatever holds you back today and live a happy life!

Do you have any more additional quotes to share? Add them down in the comments section!