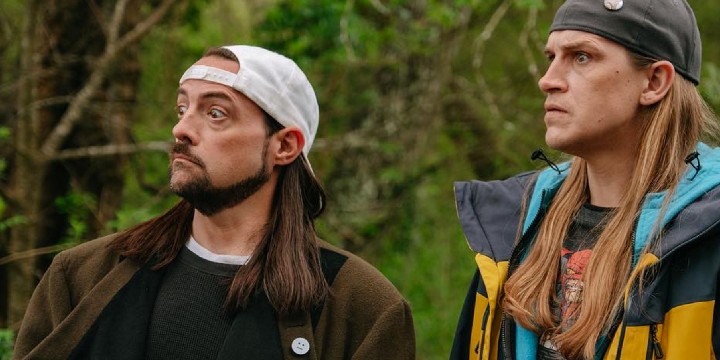 This list of Jay and Silent Bob quotes is a compilation of humorous and thought-provoking lines that will brighten your day!

Jay and Silent Bob are great friends who like to hang around, smoke weed, and watch movies. Jay is the more outspoken of the two, while Silent Bob is more reserved and only speaks when necessary.

They may be polar opposites in terms of personality, but that didn’t stop them from forming a strong and unique bond that deserves envy. Join us as we go through some of their best lines that’ll undoubtedly make you grip your seats with laughter. Maybe you’ll even get a glimpse of the special bond that exists between our two friends!

And make sure to read these Clerks quotes and Dumb and Dumber quotes.

1. “Maybe it’s because girls don’t like to be called b*tches, Jay.” – Justice

3. “What is your damage, little boy. You have a sick and twisted world perspective.” – Brent

5. “It is a comic book, not your dick! Show some respect. Hold it like you’d hold a woman.” – Brodie

6. “Man—I don’t know what the f*ck you just said, little kid, but you’re special man, you reached out, and you touch a brother’s heart.” – Pumpkin Escobar

7. “In a world gone mad, we will not spank the monkey, but the monkey will spank us.” – Jay

8. “Don’t you ever want anything more for yourself? I know this poor hapless son of a b*tch does. I look into his sorry doe eyes and I just, I see a man crying out. He’s crying out, ‘When Lord?’” – Holden

10. “See? I told you that restraining order was a good idea.” – Randal

11. “Ergo, you find yourself in a very actionable position.” – Silent Bob

13. “That was definitely worse than ‘Clash of the Titans.’” – Randal

14. “At least call me by the right f*cking character.” – James Van Der Beek

15. “Well! That was just another paean to male adolescence and its refusal to grow up.” – Tricia

16. “They didn’t really steal the monkey. It was just a diversion so we could steal these.” – Justice

17. “And I can’t believe fine-*ss b*tches like yourselves eat that sh*t. Don’t you know fast food makes girls fart?” – Jay

18. “Three days to stop that f*cking movie from getting made. Come on, Silent Bob. We’re going to Hollywood!” – Jay

21. “It may not be my way, but damn if there doesn’t go one happy family. All right, gang, let’s just shoot some tear gas into the diner, and then when the guys come out with the monkey, we’ll—f*ckbeans. That was them, wasn’t it?” – Whillenholly

22. “Y’know, I don’t get you, Justice. You used to be into all this girl stuff. Stealing, boning, blowing sh*t up, and now you’re like this little priss with a conscience. It’s really a f*cking drag.” – Sissy

24. “Nothing. The Internet has given everybody in America a voice. For some reason, everybody decides to use that voice to b*tch about movies.” – Holden

25. “The Internet is a communication tool used the world over where people can come together to b*tch about movies and share p*rn*graphy with one another.” – Holden

26. “Because I’m going to blast that flick on the internet tonight.” – Randal

27. “All these *ssholes on the Internet are callin’ us names because of this f*ckin’ stupid movie.” – Jay

28. “That’s what the Internet’s for, slandering others anonymously! Stopping the flick isn’t gonna stop that!” – Banky

29. Jay: “Well, to have all these f*cks stop talking sh*t about us on the Internet.”

Banky: “What’ve I been telling you? There’s nothing you can do about it. Unless you show up at all their houses and beat the sh*t out of them.”

32. “Oh sh*t! Don’t tell me you’re thinking of whipping your dick at that fine piece of woman, are you?” – Angel Jay

33. “Tell you what—look over at Silent Bob and see if he thinks that it’s a good idea to whip your dick out.” – Angel Jay

36. “Contrary to what you believe, not everyone in Hollywood is a homosexual.” – Miramax Studios Security Guard Gordon

37. “Don’t be so suburban. It’s the new millennium. Gay, straight—it’s all the same now. There are no more lines.” – Hitchhiker

Jay and Silent Bob Quotes That Express Their Thoughts on Movies

40. “Oh my God. Don’t tell me you have no idea there’s a movie being made of the comic you two were the basis for.” – Brodie

42. “I don’t get out to the movies that much, but ‘Bluntman and Chronic’ was blunt-tastic.” – Whillenholly

43. Tricia: “Why didn’t Miramax option his other comic instead. You know, the one about you and him and your ‘relationship?’”

Alyssa Jones: “Oh, ‘Chasing Amy?’ That would never work as a movie.”

44. Jay: “Miramax? I thought they only did classy pictures, like ‘The Piano’ and ‘The Crying Game.’”

Brodie: “Yeah, but then they made ‘She’s All That’ and it went downhill from there.”

Jay and Silent Bob Quotes That Zoom in on Transportation

45. “Have you seen the price of bus tickets lately? There’s no way I’m gonna cough up 200 bucks just to get to Chicago.” – Hitchhiker

46. “Tickets? Since when did they start charging for the bus? Didn’t we used to ride that sh*t to school every morning for free?” – Jay

47. “I can’t believe this sh*t. Five hours and not a single ride. Every day people hitch to Hollywood to stop studios from making films about ’em, but when you and I try it, it’s like we’re trapped in a f*ckin’ cartoon.” – Jay

Jay and Silent Bob Quotes to Learn More About Monkeys

48. “Holy f*ck, is that monkey waving at us? Oh, sh*t, It understood us! Maybe it’s some kind of supermonkey. What if there are more supermonkeys up at that lab?” – Jay

49. “So what can a smooth pimp daddy like myself do to help the animals?” – Jay

51. Willenholly: “Oh my God. I’m paralyzed! That monkey shot me in the *ss and paralyzed me! Oh, sweet irony!”

Justice: “You’re not paralyzed. It was just a tranquilizer.”

52. Sheriff: “An orangutan’s a member of the great ape family, it’s not a monkey.”

Whillenholly: “Look, who’s the Federal Wildlife Marshal here, me or you? That’s what I thought.”

Whillenholly: “I think I would recognize an ape if I saw one, okay? And the only thing I do recognize right now is the political fiasco I’m about to avoid here by letting this butt-f*cking Brady Bunch go.”

Funny Jay and Silent Bob Quotes to Make You Laugh

62. Chaka’s Production Assistant: “You the man.”

63. Customer at Quick Stop: “Are you even supposed to be here today?”

Dante Hicks: “Don’t get me started.”

64. Assistant Director: “Okay, you two. Just stand there, and react. Don’t say anything! Especially you.”

65. Sissy: “Shut the f*ck up, before I shoot you where you stand in your pansy red booties.”

Jay: “I am wearing pansy red booties. Why the f*ck didn’t you tell me?”

More Jay and Silent Bob Quotes for You to Enjoy

66. “Since you let our patsy slip away, you gotta convince the little kid and the fat guy to take his place. They gotta break into Provasik now.” – Sissy

67. “Don’t you never say an unkind word about ‘The Time!’ Me and Silent Bob modeled our whole f*cking lives around Morris Day and Jerome. I’m a smooth pimp who loves the p*ssy. And Tubby here is my Black manservant. What?” – Jay

68. “Do you know that I came up with the idea for Sesame Street? I came up with it before PBS. The white man stole it. That’s right. I was gonna call it NWP, ‘Niggaz With Puppets.’ Catchy, ain’t it?” – Chaka

69. “You’re like a child. What’ve I been telling you? You gotta do the safe picture. Then you can do the art picture. But then sometimes you gotta do the payback picture because your friend says you owe him. And sometimes, you go back to the well.” – Holden

70. “Plaschke, this is Willenholly. I need you to get me on the national news, pronto. Why? Because we may very well be dealing with the two most dangerous men on the planet.” – Willenholly

Which Jay and Silent Bob Quotes Do You Think Your Friends Will Enjoy?

Jay and Silent Bob initially met in Kevin Smith’s movie, Clerks, in 1994. As of 2022, they have a total of eight movies together. Good news for all the fans as well—they’ve just wrapped filming on their ninth movie, Clerks III, which is set to hit theaters later this year!

These two are neither heroes nor villains in the movie; they simply spend their days hanging out, cracking jokes, and pulling pranks. Despite their unusual behavior, these two friends know how to value their friendship.

True friends are hard to come by in this world of fakers and opportunists. That is why, if you find a true friend who will always be by your side, you must keep them.

We hope these Jay and Silent Bob quotes were able to help you understand what true friendship and living life to the fullest mean. Feel free to reread this list while waiting for their next movie together!

Which of these Jay and Silent Bob quotes is your favorite? Did these quotes make you think of your friends? Please, post them in the comments section.