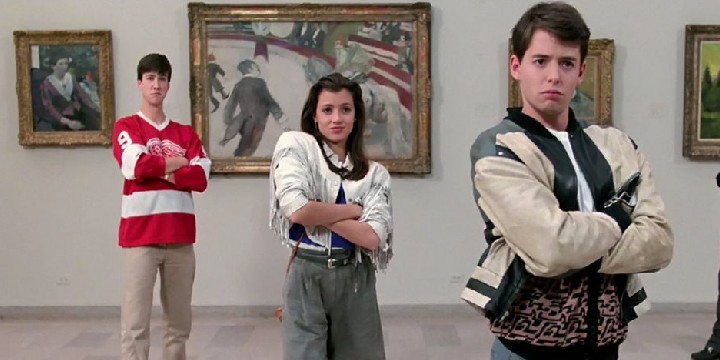 These 50 Ferris Bueller quotes will take you on a thrilling adventure that you’ll never forget!

Ferris Bueller is the title character of the late ‘80s hit teen movie, Ferris Bueller’s Day Off. Graduation day is coming, and Ferris has no plans to stay within their classroom walls.

For the ninth time, Ferris Bueller pretended to be sick as part of his scheme to skip school. He intends to use his day off with his best friend, Cameron, and girlfriend, Sloan, on a fun escapade.

Together, they will spend their time admiring the city’s beauty while evading the suspicious eyes of their dean, Ed Rooney.

He might come off as an unruly character and a bad influence on kids. But, his views on life teaches us things that even adults should keep in mind.

Life is to be lived, but we sometimes forget to enjoy it because we’re so caught up with our studies, jobs, or fears.

Skipping school isn’t the correct answer, but through Ferris, we’re reminded that sometimes, we need to cut loose from the rules and just live life!

Check out his best quotes that’ll surely open your eyes to new ideas and perspectives.

And don’t miss out these School of Rock quotes and Nacho Libre quotes.

3. “A man with priorities so far out of whack doesn’t deserve such a fine automobile.”

4. “Cameron has never been in love—at least, nobody’s ever been in love with him. If things don’t change for him, he’s gonna marry the first girl he lays, and she’s gonna treat him like sh*t because she will have given him what he has built up in his mind as the end-all, be-all of human existence.”

5. “You can’t respect somebody who kisses your *ss. It just doesn’t work.”

7. “Only the meek get pinched. The bold survive.”

10. “Life moves pretty fast. If you don’t stop and look around once in a while, you could miss it.”

11. “The place is like a museum. It’s very beautiful and very cold, and you’re not allowed to touch anything.”

14. “Regardless of how much sh*t sisters make you eat, how often they rat on you, how gross they act, or how wicked, and insensitive they can be, you should not alienate them. Because most likely they have cash and it’s usually very easy to get your hands on.”

15. “If you had access to a car like this, would you take it back right away? Neither would I.”

16. “We don’t know when the bomb is going off. We do know, however, that college starts in the fall.”

19. “You have to plan things out before you get is grief and the whole point is to take it easy, cut loose and enjoy.”

21. “Yeah, life is a carousel. A great big crazy ball of pure living, breathing joy and delight. You gotta get one.”

23. “It’s chilling to see people crazed with the minutia of their past.”

24. “There’s a lot of pressure at work in my age group. And it’s not always recognized. Some guy whose hair is falling out and his stomach’s hanging over his belt and everything makes him fart, he looks at someone like me and thinks, ‘This kid’s young and strong and has a full, rich future ahead of him, what he got to b*tch about.’”

Ferris Bueller Quotes That Zoom in on Breaking Rules

26. “The key to faking out the parents is the clammy hands. It’s a good non-specific symptom. I’m a big believer in it. A lot of people will tell you a good phony fever is a deadlock, but you get a nervous mother, you could wind up in a doctor’s office—that’s worse than school. You fake a stomach cramp, and when you’re bent over, moaning and wailing, you lick your palms. It’s a little childish and stupid, but then again, so is high school.”

27. “They bought it. Incredible. One of the worst performances of my career, and they never doubted it for a second.”

28. “Oh, I’m sorry. I can’t come to the door right now. I’m afraid that in my weakened condition, I could take a nasty spill down the stairs and subject myself to further school absences. You can reach my parents at their places of business. Thank you for stopping by. I appreciate your concern for my well-being. Have a nice day!”

29. “This is my ninth sick day this semester. It’s pretty tough coming up with new illnesses. If I go for 10, I’m probably going to have to barf up a lung, so I better make this one count.”

30. “The adult mind is a suspicious machine. Stay down, man.”

Also read: Back to the Future Quotes, Superbad Quotes

Relatable Ferris Bueller Quotes for Those Who Forget to Enjoy Life

31. “Nothing—wha—what do you mean nothing good? We’ve seen everything good. We’ve seen the whole city! We went to a museum, we saw priceless works of art! We ate pancreas!”

32. “If anyone needs a day off, it’s Cameron. He has a lot of things to sort out before he graduates. He can’t be wound up this tight and go to college.”

33. “How could I possibly be expected to handle school on a day like this?”

35. “You’re not up for some good times? It’s a beautiful day. It’s almost summer. If this was Hawaii, we’d be surfing.”

37. “Cameron, it’s a beautiful day, we’ve won our freedom, we’re traveling down one of America’s most scenic polluted waterways and you have to bring up nuclear way?”

Also read: A League of Their Own Quotes

Ferris Bueller Quotes to Open Your Eyes to Peoples’ Vulnerabilities

38. “Is there anything worse than being at somebody’s house when their parents are fighting? It’s the absolute height of social discomfort.”

39. “Maybe her life fell apart. Maybe she lost somebody. A lover. A boyfriend. A parent. A child—this kind of thing makes me a little depressed. You may think because I am at the age I am that I’m a sex maniac. That sex is all I think about. But that’s not true. I’m romantic. I think a lot of people my age are. We think about love and matters of the heart. And SAT scores and acne aside, we worry about loneliness. It’s a terrible thing. And we feel it. I feel it.”

40. “All I wanted to do was give him a good day. We’re gonna graduate in a couple of months. Then we have the summer. He’ll work and I’ll work. And we’ll see each other at night and on the weekends but then he’ll go to one school and I’ll go to another. And basically, that’ll be it. As much as we like each other, the process of growing up will separate us.”

41. “I asked him what was wrong and he said, ‘Nothing—nothing was wrong.’ There was no specific thing he was crying about. In fact, he wasn’t really even aware that he was crying. He just cried himself to sleep every night. It was a habit. The guy’s conditioned to grief that if he doesn’t feel it, he can’t sleep.”

42. “I did have a test today. That wasn’t bullcrap. It’s on European socialism. I mean, really, what’s the point? I’m not European. I don’t plan on being European, so who gives a crap if they’re socialists? They could be fascist anarchists—that still wouldn’t change the fact that I don’t own a car.”

44. “It’s nice to know I have such loving, caring parents. You’re both very special people.”

45. “One very serious danger of playing sick is that it’s possible to believe your own act.”

46. “The thing with taking his old man’s car? It’s good for him. It teaches him to deal with his fear.”

47. “I was serious when I said I’d marry her. I would. This isn’t just teenage infatuation. That’s what my parents call it. What do they call what they have? If that’s love, I’ll take that infatuation.”

48. “Cameron is so uptight that if you stuck a lump of coal up his *ss, in two weeks you’d have a diamond.”

50. “This is the part where Cameron goes berserk.”

Do You Remember Breaking Some Rules When You Were in High School?

Adults like to establish rules at school or home to mold kids to be more responsible people. But, too much of it can suffocate us and make us feel more inclined to do otherwise. As children, we may think that breaking the rules would give us the freedom we otherwise won’t have when adults supervise us.

Ferris Bueller wanted the freedom to see life outside the walls of a lecture room. He especially wanted this for his friend, Cameron, who rarely had fun in life. Plus, Ferris would rather spend his remaining days in high school outdoors and having fun with his friends rather than be stuck with papers and homework.

Behind his troubles and wayward acts, he’s just a kid who tries to remind us to experience the beauty of life. After all, true success isn’t marked by your grades in school. Life extends beyond the classroom, and that’s precisely what Ferris is trying to make us understand.

Like Ferris Bueller, why don’t we break some rules and just enjoy life? Spend a day off with your friends, listen to music, and do whatever you want!

Did you break some rules when you were younger? Were you able to relate to these Ferris Bueller quotes? Please, share your thoughts below!