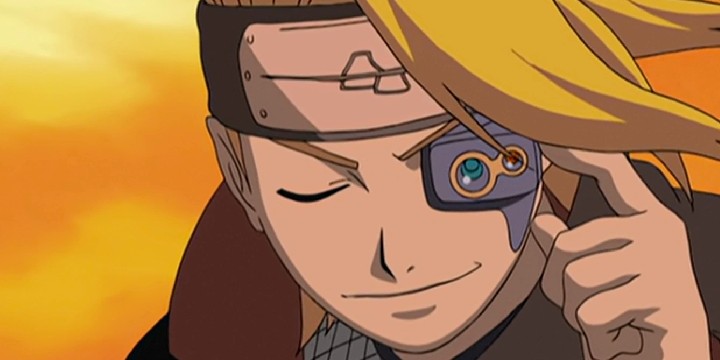 These top 30 Deidara quotes will fire you up with explosive lines that are full of action.

Deidara is a character in the Naruto manga and anime series. He is an S-rank runaway ninja who specializes in assassination through his explosives.

In the series, we see that he has a unique technique of turning earth and lightning chakra into bombs.

This skill of his makes him one of the strongest and most unforgettable antagonists in the series.

Although Deidara is evil, he is still an inspiration because he is a character who is passionate about his art.

He has dreams and the motivation to do better, especially when it comes to his techniques.

Indeed, Deidara is a cool and unique antagonist that will guiltily steal your heart because of his awesomeness.

So, if you are curious about his iconic lines, make sure to read the full list of quotes below.

And don’t forget to check out these Pain quotes and Obito quotes.

1. “Life’s only beautiful because it’s so fleeting, so transient.”

2. “Look at those fools. They have no appreciation for art. You have to feel art, and true art is an explosion!”

3. “Art is something that blossoms for an instant before withering away. Art is beauty that lasts for just a moment.”

4. “Fine art is the beauty of that single fleeting moment of explosion.”

5. “Art makes it able to let you forget the bad around you.”

6. “If I had to keep my patience with you in a bag, it’d be bursting at the seams! Say another word, and I’ll make you wish you were never born!”

7. “You wouldn’t have gotten anywhere without the artistic contribution of my explosive clay. It’s my art that deserves the praise here!”

8. “If an artist doesn’t get high levels of inspiration, his sentiments are dulled.”

9. “This will be my ultimate piece of art. I’ll explode. I shall die and become art itself! This will be like no explosion before it, and it will leave a scar upon the earth unlike anything else. Then, my art will receive the admiration it’s always deserved! Tremble! Be afraid! Recoil in despair! Cower in awe! And cry your heart out because my art is an explosion!”

Deidara Quotes to Learn About His Art

12. “Money-making and mercenary jobs don’t have an iota of art.”

13. “I got to say, this village’s design is pretty artistic. Means, it’s really worth destroying.”

14. “Thing? Philistine! Some people wouldn’t know true art if it bit them on the face.”

15. “Snaring you alive was rough, but this is one more we can scratch off our list.”

16. “Shut up! I killed Sasuke Uchiha! And you’re next, you art-hating sack of wrinkles!”

17. “Tobi, even a Buddha loses its patience when insulted a third time. One more word, and there’ll be no doubt about the cause of your death.”

18. “You were only able to kill Orochimaru thanks to Uchiha blood, hmm? You’ve just been blessed with good genes, so quit acting so smug!”

19. “You think you’re so cool, and those eyes make me sick! Always judging me and my art! You have no appreciation of the beauty of my work, and it makes me want to kill you!”

Deidara Quotes to Know More About His Nature and Personality

21. “That explosive power is my masterpiece.”

22. “Better listen to your sensei, kid. This guy’s been dead for a while now.”

23. “There’s no mistake. He’s the Jinchuriki. The one who bursts in and starts barking. Itachi actually described him quite accurately.”

24. “Sorry that I’m not here. I’m lost in thought. Seeing how this is unfamiliar territory, I might be gone for a while.”

25. “It’ll be troublesome to be attacked from below. Plus, I’m tired of looking at your expressionless face!”

26. “My man Sasori was beaten by that little brat and the old hag. Leaving a thing of eternal beauty for the future? Yeah, right. All he did was get killed. He was overconfident about that puppet. The old fool exposed his weakness. Oh well, it’s still an ending worthy of an art.”

29. “That is what annoys me the most about you and your brother! You think you’re just so cool!”

Did These Deidara Quotes Inspire You to Invest Yourself in the Things You Are Passionate About?

One thing that every Naruto fan will notice about Deidara’s character is how invested he is in the art of killing through explosions. He is a skilled ninja who has a simple desire to bomb and defeat every enemy that comes his way.

On the surface, Deidara can be seen as someone shallow and evil. But, his passion for his work is still an admirable part of him that we can all find inside ourselves. Other Naruto characters have different motivations that push them to do what they have to do, and Deidara is no different.

Deidara, unlike other antagonists who had sad and traumatic backstories, only wants to excel in being a ninja and using his powerful techniques. He was driven by his desire and ambition, and that’s ultimately what pushed him to steal a forbidden jutsu.

Many fans may only see Deidara as a minor character that the protagonist will defeat. However, looking at him closely, he is an antagonist that will make you reflect on your passions, ambitions, and greed.

Hopefully, these Deidara quotes were able to entertain you and teach you a thing or two about what drives a person to act. Don’t be afraid of chasing your dreams, but do so through moral means!