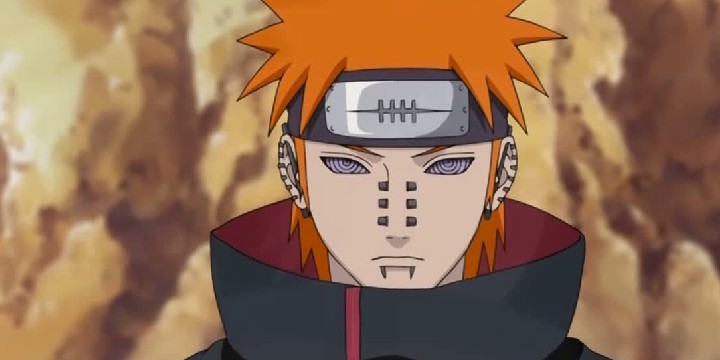 These Pain quotes will help everyone understand the harsh realities of the world.

Pain, also known as Nagato, is one of the characters of the Naruto manga and anime series. He was a ninja of Amegakure and a descendant of the Uzumaki Clan.

One of Pain’s defining characteristics is his determination to reach his goal of bringing peace to the world.

However, due to his traumatic experiences when he was younger, his methods became evil. Instead of achieving peace through good ways, he became destructive and chaotic.

Pain might be an enemy in the story, but he undeniably holds wisdom that can open your eyes to the real world.

So, if you are curious about his thoughts and views, feel free to read the complete collection below.

And don’t forget to check out these Obito quotes and anime quotes.

1. “Sometimes, you must hurt to know, fall to grow, and lose in order to gain. Life’s greatest lessons are learned through the pain.”

2. “Learn to embrace the fear of feeling about what it’s like to contemplate, what it is to know true pain.”

3. “Nothing happened. Nothing except for the war. Too many people died in this land. All the pain forced me to grow up.”

4. “You think you’re the only ones who matter. You think you can avoid death, but that peace made you foolish and thoughtless. If you kill someone, someone else will kill you. This hatred binds us together.”

6. “We are just ordinary people driven to revenge in the name of justice. But if revenge is called justice, then justice would only breed even more revenge and become a chain of hatred.”

7. “Even the most ignorant, innocent child will eventually grow up as they learn what true pain is. It affects what they say, what they think, and they become real people.”

8. “How can you say that you’ll never change? That you won’t change, regardless of the pain you face? Can you continue believing in yourself forever? Can you guarantee it? Can you have such faith in yourself?”

9. “Justice comes from vengeance, but justice only breeds more vengeance.”

10. “Love is the reason why there is pain. When we lose someone precious to us, hate is born. Vengeance is the product of that hate, and so death follows. But in death, there is only more death. This will give rise to more pains. In this cursed world we live in, it is a cycle of hatred that will not cease. You and I seek the same thing that Jiraiya-sensei wanted. Let me ask you this, how will you confront this hatred in order to create peace?”

Pain Quotes That Will Change Your Views on the World

11. “Love breeds sacrifice, which in turn breeds hatred. Then, you can know pain.”

12. “Do you understand pain a little now? If you don’t share someone’s pain, you can never understand them.”

13. “The agony will fade with the passage of time.”

14. “People inadvertently cause harm to one another.”

15. “Even innocent, foolish children will grow up in the face of pain, until their thoughts and beliefs are the same as their doubts.”

16. “Just because you understand them doesn’t mean you’ll be able to agree on anything.”

Pain Quotes to Learn About War

20. “Religion, ideology, resources, land, spite, love, or just because, no matter how pathetic the reason, it’s enough to start a war. War will never cease to exist.”

21. “Just by living, people hurt others without even realizing it. So long as humanity exists, hate will also exist. There is no peace in this accursed world. War is just a crime paid for by the pain of the defeated.”

22. “Dying like trash, never-ending hatred, pain that never heals—that is war, this is what we must face.”

23. “As it happened, our little nation and its villages became the battlefield where the great nations waged their war. Each time they did, our nation was ravaged and laid to waste. After many such battles, the great nations stabilized, but our smaller nation suffered, and it barely recovered.”

Pain Quotes That Will Teach You About Peace

24. “True peace does not exist and will not exist shortly as long as we live in this doomed world.”

25. “That would be justice. However, what about my family, my friends, my village. They suffered the same fate as this village at the hands of your hidden leaf ninja. How is it fair to only let you people preach about peace and justice?”

26. “People are stupid. If I don’t do this, there will be no peace. Eventually, time will pass, and the pain will heal. Eventually, the checkmate’s power will weaken, and people will begin fighting again. This time, they will use the weapon themselves and once more know true pain. And for a short time, peace will come again. It will give birth to a short period of peace within this endless chain of hatred. That’s my wish.”

28. “You are a curious fellow. You remind me of how I once was. I wasn’t able to believe in Jiraya, nor could I believe in myself. However, I have a feeling that, unlike me, you will walk towards a different future. I think I shall believe in you, Naruto Uzumaki.”

29. “This shinobi world of ours is ruled by hatred and hatred alone.”

30. “The Six-Tails’ Jinchuriki. I am going to create a new world, and for that, I need the Tailed Beast inside you. I am taking you, Six-Tails.”

Did These Quotes Make You Reflect About Peace, War, and Pain?

The world of shinobis is chaotic and full of violence. There are many characters in the Naruto series that were traumatized due to the war. All of them wanted genuine change, and one of the unforgettable characters introduced in the series is Pain.

Pain, at first, was a good person who wanted genuine peace in the world. However, the death of his friends changed him in a way that affected everyone around him negatively. The same can be said about people in our lives.

Some of us might know individuals who suffered from a bad past that changed them into someone we don’t know anymore. Experiencing horrible things can change who we are. But, it is always a matter of choice if we let those experiences turn us into a monster or not.

By reading our collection, we hope that you were able to reflect on the harsh reality of the world. More than that, let these Pain quotes inspire you to bring about positive change, no matter how many bad things life presents to you. Be the light in a world full of darkness, and change the world for the better!