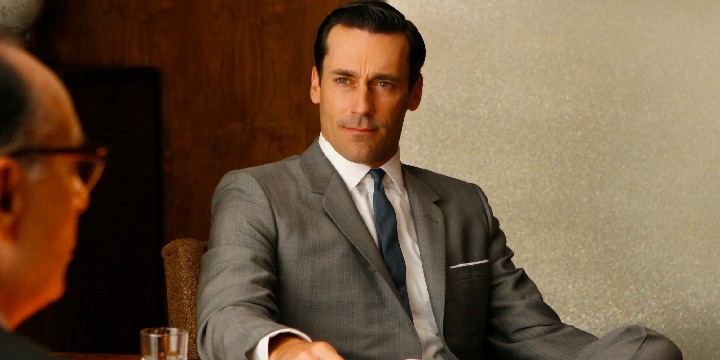 Dive deep into these Don Draper quotes that are sure to help you succeed in whatever field you’re in!

Everyone makes decisions about what they will use or buy, from the brand of shampoo for their hair to the shoes they will wear to look nice. However, most of the time, we are unable to make a decision and must rely on the advice of others or advertisements.

Don Draper is an adman who can see beyond people’s minds. This is how he convinces them to buy what he’s selling. He familiarizes himself with his target market and stays focused on his goal.

Whether you work in advertising or not, there’s a lot to learn from these Don Draper quotes we’ve gathered. You’ll undoubtedly find a quote of his that you can use as your work or life motto!

And don’t forget to check out these Mad Men quotes and The Sopranos quotes.

1. “I don’t believe in fate. You make your own opportunities.”

2. “If you don’t like what’s being said, change the conversation.”

3. “Make it simple, but significant.”

4. “Change is neither bad nor good, it simply is.”

6. “You want respect? Go out and get it for yourself.”

7. “You can’t tell people what they want. It has to be what you want.”

8. “Sometimes we don’t get to choose where our talents lie.”

13. “Maybe I’m not as comfortable being powerless as you are.”

14. “What you call love was invented by guys like me—to sell nylons.”

16. “It wasn’t a lie, it was ineptitude with insufficient cover.”

17. “The truth is people may see things differently, but they don’t really want to.”

18. “People want to be told what to do so badly that they’ll listen to anyone.”

19. “Well, I hate to break it to you, but there is no big lie. There is no system. The universe is indifferent.”

20. “I keep going to a lot of places and ending up somewhere I’ve already been.”

21. “We’re flawed because we want so much more. We’re ruined because we get these things and wish for what we had.”

Don Draper Quotes That Will Inspire You

23. “You’ll tell them the next thing will be better because it always is.”

26. “You are the product. You feeling something. That’s what sells. Not them. Not sex. They can’t do what we do, and they hate us for it.”

27. “When a man walks into a room, he brings his whole life with him. He has a million reasons for being anywhere. Just ask him.”

28. “I know you’re all feeling the darkness here today. But there’s no reason to give in. No matter what you’ve heard, this process will not take years. In my heart, I know we cannot be defeated, because there is an answer that will open the door. There is a way around this system. This is a test of our patience and commitment.”

30. “It’s useless to be creative unless you can sell what you create.”

31. “We’re going to sit at our desks and keep typing while the walls fall down around us because we’re creative.”

32. “The greatest thing you have working for you is not the photo you take or the picture you paint. It’s the imagination of the consumer. They have no budget. They have no time limit. And if you can get into that space, your ad can run all day.”

33. “Advertising is based on one thing: happiness. And do you know what happiness is? Happiness is the smell of a new car. It’s freedom from fear. It’s a billboard on the side of a road that screams with reassurance that whatever you’re doing is okay. You are okay.”

34. “Peggy, just think about it. Deeply. Then forget it. And an idea will jump up in your face.”

35. “Success comes from standing out. Not fitting in.”

36. “Even though success is a reality, its effects are temporary.”

37. “I’m glad this is an environment where you feel free to fail.”

38. “I have been watching my life. It’s right there. I keep scratching at it, trying to get into it. I can’t.”

39. “It’s your life. You don’t know how long it’s gonna last, but you know it doesn’t end well. You’ve gotta move forward—as soon as you can figure out what that means.”

40. “You’re born alone and you die alone and this world just drops a bunch of rules on top of you to make you forget those facts. But I never forget. I’m living like there’s no tomorrow because there isn’t one.”

Don Draper is a well-known character from the hit period drama, Mad Men. He is a brilliant advertiser who understands his products and the needs of his customers.

Every customer is different, and not everyone is good at decision-making. At the same time, not all brands know how to sell their products effectively. The connection and middle point between these two struggles gave birth to advertising.

Sadly, some advertisements are deceptive and do not speak the truth about the product or its target market. To make effective ads, you have to brainstorm and be competitive. This made advertising a fierce and intense field.

Thankfully, we have some pearls of wisdom from one of the greatest advertisers ever, Don Draper. Let his words guide you toward truth and credibility. Maybe he’ll even be able to teach you a thing or two about being persuasive and decisive!

Which of these quotes were most relevant to you? Please, let us know in the comments.